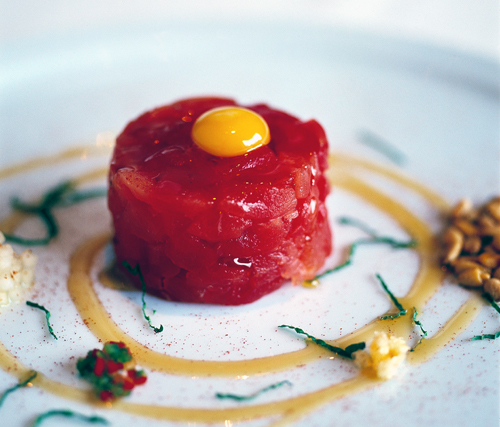 Restaurant Michael Mina in San Francisco is celebrating its fifth anniversary with a “birthday tasting menu.”

Paired wines are an additional $55.

The gourmet birthday meal is available through July 11.

Mina’s Clock Bar (across from his eponymous restaurant inside the Westin St. Francis) also celebrates its first year in business with five nights of guest bartenders who will be shaking up special cocktails, starting July 13.

Among the celeb bartenders who will be making appearances will be Scott Beattie (formerly of Cyrus in Healdsburg) on July 13, and Erik Adkins, of Heaven’s Dog in San Francisco, on July 16.

Fleming’s Prime Steakhouse and Wine Bar (with Northern California locations in Palo Alto and Walnut Creek) is serving up an Alaskan King crab legs feast for $99 for two people. 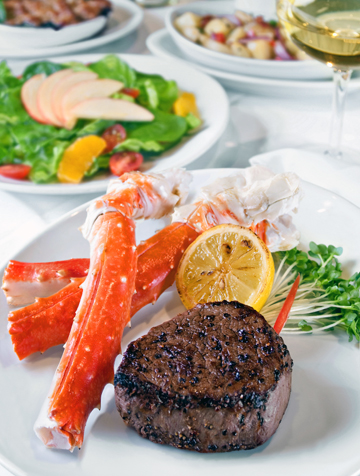 The three-course meal includes butter lettuce salad with citrus vinaigrette, warm Yukon Gold potato salad, summer squash, and two berry cobblers with vanilla ice cream. Each guest then gets a choice of either 1 1/2 pounds of crab legs with drawn butter or 3/4 pound of crab legs plus a filet mignon.

This special is being offered through Aug. 31. If you reserve online, you’ll receive a $25 Fleming’s card at the end of the meal, which is valid for the month of September.

Fans of San Francisco’s Ferry Plaza Farmers Market will be glad to know that it’s now also open on Thursdays, 10 a.m. to 2 p.m.

This new market day features not only local produce for sale, but sustainable street foods to enjoy for lunch. Among the purveyors are: smoked hot dogs and peanut butter bacon brownies from 4505 Meats; Korean barbecue tacos and kimchee fried rice from Namu; pizza made to order from Pizza Politana; and smoked fish sandwiches from Cap’n Mike’s Holy Smoke.

Over in the East Bay, Pican Restaurant in Oakland is now serving weekday lunch and Sunday brunch.

The restaurant, which serves up a California spin on Southern favorites, offers lunch items such as Southern pimento cheese burger with bread & butter pickles; and Alabama catfish po’boy with Creole mustard remoulade.

For brunch, choose from dishes such as beignets with sweet cream sugar and cinnamon sugar; buttermilk fried chicken Benedict; and smoked brisket with collard greens hash.

For more down-home good eats, head to Aptos,  2 p.m. to 6 p.m. July 12, for a farm-inspired barbecue, featuring Blue Moon Organics produce and local meats. For entertainment, there will be coffee finger-painting with Verve Coffee Roasters. Yes, you read that right.

The event will be held at Blue Moon Organics in Aptos. Tickets are $30 for adults, and $15 for children.

Are you in a pickling mood?

Then head to a fun workshop in San Francisco, 3 p.m. to 5 p.m. on July 12, where you’ll learn how to make your own Asian pickles. 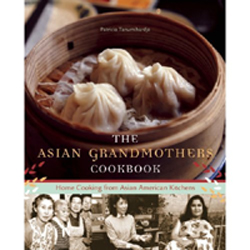 Pat Tanumihardja, a Bay Area food and travel writer,  will teach the class, “Grandmother Workshop: Asian Pickles with Pat.” Tanumihardja is also the author of the upcoming book, “The Asian Grandmothers Cookbook” (Sasquatch), which will be published in October.

Tickets are $15. Bring your own apron, chef’s knife, and jar, and a few veggies. You’ll leave with a big jar of pickled veggies to tote home.