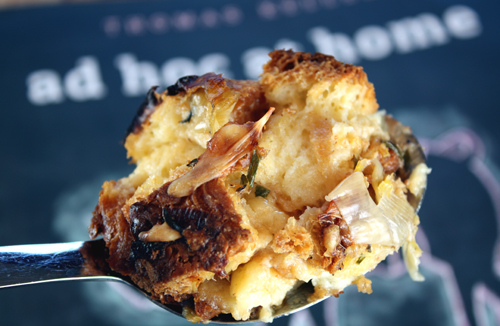 As far as achievements go, this might be a small feat. But I can happily report that I’ve now succeeded in making all the recipes from the small promo brochure for the upcoming “At Hoc At Home” cookbook (Artisan) by legendary chef, Thomas Keller.

Of the four recipes printed in this sneak-peek brochure, this one for “Leek Bread Pudding” is by far the richest.

Not only are there three cups of whole milk in this dish, but there is also an equal number of cups of heavy cream.

And the bread used in this particular bread pudding? Oh, that would be very, very, very buttery brioche, which you can make yourself if you feel like channeling your inner Martha Stewart or purchase at a bakery like I did. (Note: Draeger’s stores on the Peninsula make brioche rolls that work perfectly for this dish. I opted to leave the crust on the rolls for this recipe, which originally called for cutting them off. But the crust is so soft on the rolls, it’s fine to do so.) 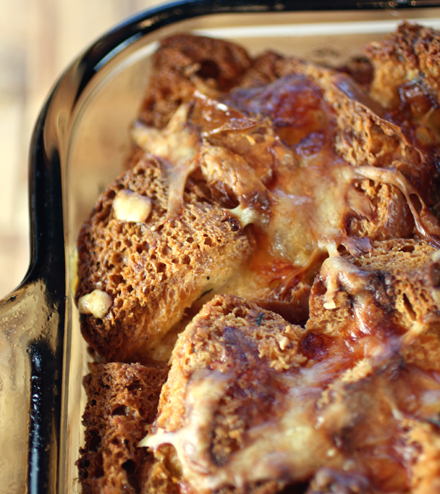 Yes, this may as far as it gets from a low-cal dish, but I’m here to tell you this decadent dish is far worth each and every calorie.

You might be surprised that the rectangular baking dish used for this recipe need not to be buttered beforehand. But with such a copious amount of fat in the ingredients already, you don’t need to do so.

You might also be alarmed at first by the large amount of liquid poured over the brioche cubes. But it all does get soaked up beautifully, so have no fear.

With three eggs also in the mix, the bread pudding puffs up a bit in the heat of the oven. It emerges all crispy brown on top, and fluffy and custardy inside.  Indeed, it’s nearly souffle-like in texture, with creamy, soft, gentle leeks luxuriously flavoring it all. 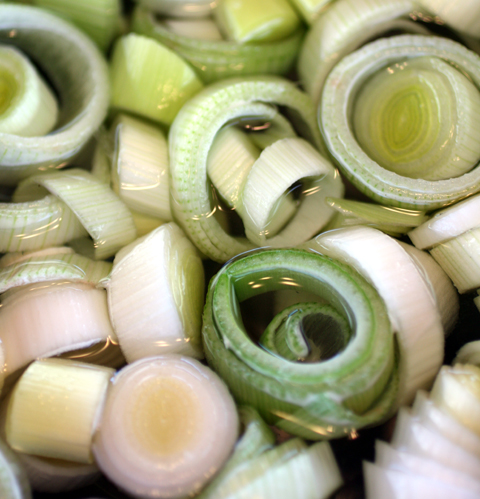 So there you have it now — all four preview recipes available from the upcoming Ad Hoc cookbook. (See the end of this post for links to the other recipes.)

With this last one ever so supremely sumptuous, too, it may just satiate you until the actual book comes out in November.

Put leek rounds in a large bowl of tepid water and swish so that any dirt falls to the bottom of the bowl. Set a medium saute pan over medium-high heat, lift the leeks from the water, and add them to the pan. Season with salt and cook, stirring often, for about 5 minutes. As the leeks begin to soften, lower the heat to medium-low. The leeks will release liquid. Stir in the butter to emulsify, and season with pepper to taste. Cover the pan with a parchment lid (parchment paper cut to fit the size of your pan), and cook, stirring every 10 minutes, until the leeks are very soft, 30 to 35 minutes. If at any point the butter breaks or looks oily, stir in about a tablespoon of water to re-emulsify the sauce. Remove and discard the parchment lid.

Meanwhile, spread the bread cubes on a baking sheet and toast in the oven for about 20 minutes, rotating pan about halfway through, until dry and pale gold. Transfer to a large bowl. Leave oven on.

Add leeks to the bread and toss well, then add chives and thyme.

Lightly whisk eggs in another large bowl. Whisk in the milk, cream, a generous pinch of salt, pepper to taste, and a pinch of nutmeg.

Add remaining custard, allowing some of the soaked cubes of bread to protrude. Sprinkle the remaining 1/4 cup cheese on top and sprinkle with salt.

Bake for 1 1/2 hours, or until the pudding feels set and the top is brown and bubbling.

From “At Hoc At Home” 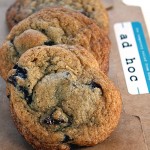 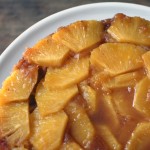 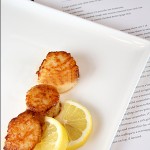