Noshing at Nombe in San Francisco 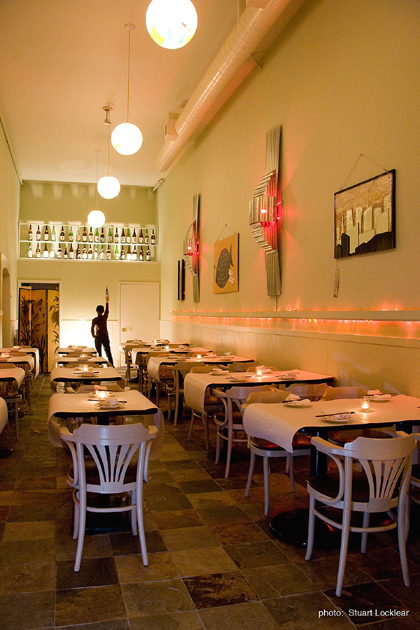 It’s always a challenge to discreetly take photos inside extremely dim restaurants without the distraction of a flash.

It’s doubly hard when the dining room’s lighting also happens to have a very night-clubby red glow to it. Such is the case at the hip new Nombe in San Francisco, a short drive from the Best Western Tomo.

Alas, not even help from my good friend, a professional photographer, could salvage the pics I took when I was recently invited in to dine as a guest. Indeed, when she first saw my photos, she deemed them “radioactive.”

Fortunately I was able to summon help from the publicists for the restaurant, who were kind enough to supply me with a few very nice photos.

It’s a good thing, too, because odd red-glow aside, Nombe is fun and most colorful, indeed. It has transported the time-honored tradition of Japanese izakaya noshing to the Mission. In Japan,  “izakaya” refers to a drinking spot that serves small plates of food. And Nombe (pronounced ‘”nom-bay) is what you would refer to someone who likes to drink. A lot.

Executive Chef Nick Balla (late of the popular O Izakaya Lounge in San Francisco) has long been fascinated with Japanese cuisine. “My Mom grew up a hippie,” he says with a laugh. “I always had miso around. I had a lot of Japanese friends. And I just like the flavors.”

He and his partners have transformed a former taqueria and diner into an eclectic spot that stays open until 2 a.m. on Fridays and Saturdays. The black and white tile diner floor is still there, but augmented by almost Deco-like light fixtures made of recycled metal. Balla did all the renovations, himself, with his parents even lending a hand with the dry-walling.  He even made all the wooden menu boards, too.

As you look around, it’s hard to figure out just what Balla did NOT make. Umeboshi (pickled plum) and furikake (a staple used to season rice) are all made in-house. Balla also makes his own karasumi (salt-cured mullet roe) from fish his uncle in Florida sends him.

Nombe also has an extensive list of sakes, and its own sake sommelier in Gil Payne, who attended college in Japan. In fact, the restaurant will host its first sake dinner on March 18. Four different namazake sakes (fresh, unpasteurized sake) will be paired with four dishes for $45 per person. For reservations, call (415) 681-7150. 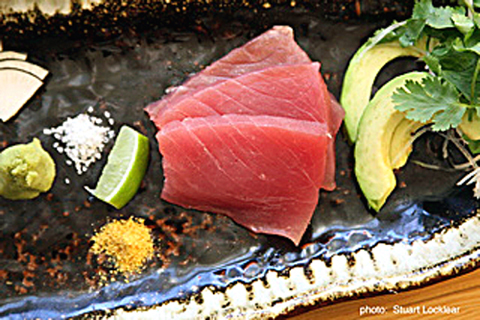 We started with a special of assorted sashimi. It was listed as 20 pieces for $34.  But since we wanted to try a lot of dishes, the chef was kind enough to make us a half-portion size of the fresh big-eye tuna, local halibut, ocean trout, New Zealand hiramasa, and tuna tartare with nori and sesame. The fish was impeccable.

Next, skewers of grilled chicken thigh ($5) that were gloriously tender and smoky. Accents of shiso and ume added even more complexity and interest with their minty and tangy flavors. We also enjoyed the grilled chicken skin skewers ($4) that were wonderfully crispy and fatty — like the best part of a fried chicken. 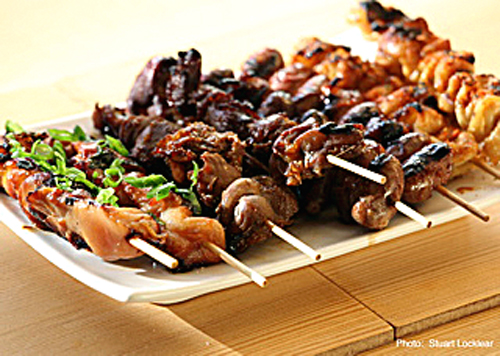 Skewers of juicy, fat chunks of pork belly ($9) followed. Dusted in cornstarch before being grilled, they were crusty on the outside and molten-y fatty on the inside with an almost caramel-like flavor. Divine.

Next, an unusual butternut squash tempura roll ($9) with green tea salt to dip it in. The crisp roll hid creamy chunks of squash, as well as rich cream cheese. It was at once sweet, creamy, bitter and salty, with the green tea salt really heightening the earthy-briny-umami taste of the seaweed.

That was followed by a special of that very special cured mullet roe ($12) topped by a poached egg. The roe was firm and its buttery texture amplified by the oozy egg yolk.

Onigiri, one sizable rice ball stuffed with a bit of salted salmon and garnished with salmon skin as crispy as a potato chip, was comforting in its simplicity. But maybe a little pricey for $6.

Finally, a warm kabocha mochi cake sprinkled with Marcona almonds ($7). I liked the twist on traditional mochi. But my taste buds soon tired after just a few bites of this rather dense, pasty cake.

Nombe definitely caters to the late-night crowd. But morning people will be glad to know that the restaurant recently introduced a weekend brunch with such inventive fare as a sake Bloody Mary, and a tuna melt ($14) with poached ahi, poached egg, grilled sourdough and cheddar cheese.

All of which makes Nombe one colorful spot, indeed.