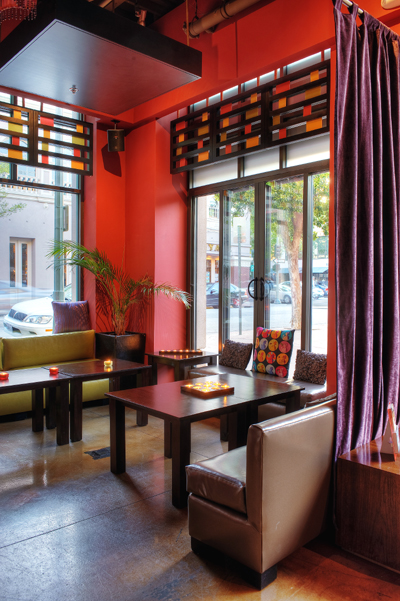 If you haven’t yet checked out Junnoon’s swank revamped cocktail lounge, now’s the time to do so at the downtown Palo Alto restaurant’s new extended “Happy Hour,” every Thursday, 5 p.m. to 7 p.m.

June 25-26, Marché in Menlo Park will spotlight Pacific seafood on its menu with proceeds to benefit the Gulf Coast cleanup.

The four-course menu will include the likes of “Confit of Half Moon Bay Albacore with Olive Oil Pudding and Kalamata Granité” and “Hawaiian Mero Bass and Local Abalone with Porcinis.”

Price is $80 per person with an additional $59 for wine pairings. Ten dollars from each dinner sold will be donated to the Louisiana Bayoukeepers, members of the Waterkeeper Alliance, which have been the first line of defense against this oil leak disaster. Donations will help pay for clean-up supplies, protective gear, emergency office space and food for volunteers.

The Asian Chefs Association, which will be cooking up a storm at the James Beard House in New York on Oct. 4, will be preparing a preview dinner June 27 at Chef Chu’s restaurant in Los Altos.

The five-course dinner will give you a taste of what the chefs have up their toques even if you can’t make it to New York for the real deal. Dishes include crab Napoleon with Kobe beef and foie gras butter sauce by Jackson Yu of Live Sushi Bar in San Francisco; and kaffir lime broiled scallop with asparagus, gobo and corn pudding by Scott Whitman of Sushi Ran in Sausalito.

Price is $100 per person. Reservations must be made in advance by calling (510) 883-9386 or emailing chau@chilipepperevents.com. Galaxy Granola of San Rafael, which touts its healthful granola as having about 70 percent less fat than its competitors, wants you to trade in your fatty foods for good-for-you ones.

The granola company, which bakes its product with fruit (such as applesauce) as opposed to oil, is hosting a “Fat Swap,’‘ 10 a.m. to 2 p.m. June 19 at the Whole Foods in downtown Palo Alto. Bring by your fatty foods (mayo, butter, potato chips, etc.) and be eligible to win a $250 gift certificate to Whole Foods; free Galaxy Granola and fresh fruit for three months; and T-shirts and free granola samples.

Additionally, there will be live music, as well as a healthy barbecue spread.

Executive Chef Roy Tang is back at Presidio Social Club in San Francisco. The chef, who opened the restaurant, also has brought back a Sunday favorite: the pig roast.

The June 20 pig roast will be preceded by a “Father’s Day Happy Hour,” 3 p.m. to 5 p.m., that features complimentary pork sliders. For those already smacking their lips, set your watches as the pig will emerge from the coals at 3 p.m. For $20 that day, you get pupu platters and two Mai Tais.

Following that inaugural event, the pig roasts will continue every Sunday with a happy hour, 4 p.m. to 6 p.m., again featuring pupu platters and two Mai Tais for a total of $20. Additionally, the roasted piggy will be featured in a la carte dishes those nights for $20 and under.-

Another meaty time can be had 5:30-7:30 p.m. June 24 at the “Sustainable Sausage and Beer Party” at under the North Arcade of the Ferry Building in San Francisco.

CUESA, the Center for Urban Education about Sustainable Agriculture, hosts this evening of locally made sausage and beer. Seven local chefs will be manning the grills, including Chris Cosentino of Incanto and Boccalone; Ryan Farr of 4505 Meats; and Antelmo Faria of Tacolicious.

A $30 ticket gets you a mini sausage from each chef and a taste of beer from each participating brewery.

If you can’t make it to that event, you still can enjoy more sausage fun, noon-1:30 p.m. June 26 at the farmers market at the Ferry Building.

Last year’s champ, Mark Sullivan of Spruce in San Francisco, will return to defend his crown in the “Sausage Grill-Off,” against Dave Bazirgan of Chez Papa Resto, Peter McNee of Poggio, Thomas Odermatt of Roli Roti, and Scott Youkilis of Hog & Rocks/Maverick.

Mini sausages from all the chefs will be available after the competition for a $2 donation to CUESA.

As the warm-up act to that competition, author Victoria Wise of “Sausage: Recipes for Making and Cooking with Homemade Sausage” (Ten Speed Press) will do a free sausage-cooking demo, 11 a.m.-11:45 a.m. in the CUESA kitchen.

San Francisco’s venerable Palio D’Asti rings in its 20th anniversary with a contest that runs through July.

Every time you come in for lunch or dinner, you can enter a drawing for such awesome prizes as a cocktail reception for 20, an “Iron Chef”-style mixology class for 12, a wine pairing dinner for six or a case of restaurant founder Gianni Franco’s Italian wine.

It’s anniversary time for Coco500 in San Francisco, too. In honor of  its fifth year, the restaurant will feature a special “Happy Hour,” 4 p.m. to 6 p.m. weekdays, where everything is $5.