Mystery Sweets and Winners of the Olive Oil Contest 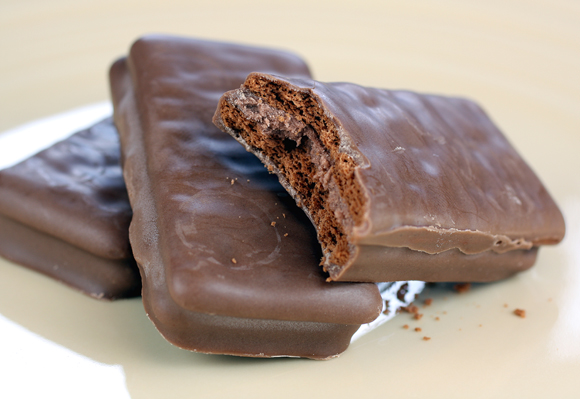 Do you know what that chocolate cookie is above?

How about that crunchy little one below?

Though both have quite storied pasts, they are both new to my taste buds, having been introduced to them on my recent trip to Australia, sponsored by Boundary Bend, Ltd.

The chocolate biscuit (cookie to you, Americans), composed of two layers of crispy chocolate malted cookies spread with light chocolate cream and then covered in yet more chocolate, is supposedly the very favorite of Australians. Any Aussies in the house? Is that true? Is this cookie akin to the Oreo of Australia?

Arnott’s bakery, established just north of Sydney in 1865, started making the cookies in 1964. They were apparently named after the winning horse in the 1958 Kentucky Derby, according to Wikipedia, after the owner of Arnott bakery attended that particular race.

Pepperidge Farm introduced the Aussie-made cookies to the United States a couple of years ago in Target stores. They are sold there only from October through March, though, no doubt because that’s summer-time in the Southern Hemisphere, when the temperatures soar and would wreck havoc on shipments of chocolate-coated treats. 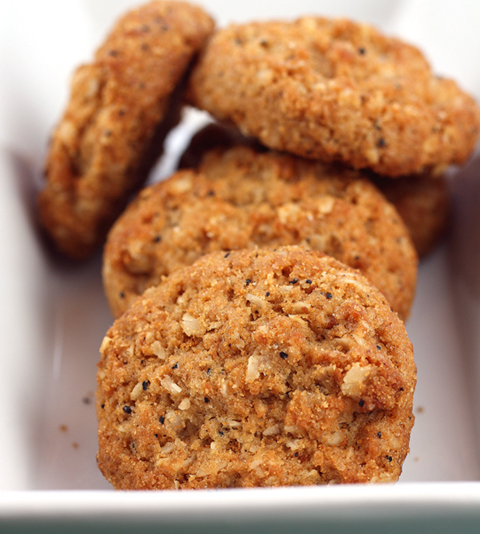 The second cookie originated around 1915 during World War I. Loaded with rolled oats, coconut and wattleseed (nutritious seeds with a vaguely hazelnut flavor that come from native trees in the Australian bush), but made without eggs or milk, the cookies not only kept well, but were an inexpensive source of added nutrition. That’s why wives and girlfriends would bake them during the war to send to soldiers.

The cookies were named after the landing of Australian and New Zealand Army Corps (ANZACs) in Gallipoli on the coast of Turkey, now known as Anzac Cove.

As you can probably guess now, those little round cookies, which taste a little like a granola bar, are called Anzac Biscuits, which are also still baked at home to this day.

And the chocolate ones are the famous Tim Tam cookies. 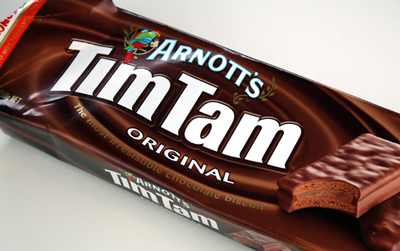 Of course, the true pleasure in traveling lies in meeting new people and seeing new sights. But there’s no denying how wonderful it is to discover some really good cookies like these along the way, too.

As you recall, in this contest, I asked you all to tell me what fascinated you the most about Australia, whether you’d been there or not.

Here were the winning answers, in no particular order:

1) Amelia, who wrote: “Well, I have never been there but have this mythical idealized imagery of it. I love the openness of the land and the people, the laid back spirit, the awesome Aussie wines, the “songlines” (reference: one of my favorite travel book by Bruce Chatwin), the biggest, most amazing coral reef (which I would love to scuba dive one day), Donna Hay’s food, and all my good friends from down-under…they are so relaxed to be around, it’s like an instant vacation of the mind!”

2) Aibrean, who wrote: “I’m an anthropology and journalism major, so although you already said it, the people fascinate me the most about Australia! I don’t know what it is about — perhaps the fact that they were so far removed from the government in England, but they seem so relaxed, down to earth, and welcoming. I’ll bet the amazing scenery also keeps them pretty happy too. I would love to go visit some day, but on a college student’s budget, winning some oil from Oz may be the closest I get for a while!”

3) AFoodObsession, who wrote: “Balmain Bugs..reason enough to travel the 21 hours from NY to Sydney again…sauteed in shallots and olive oil, with lime..overlooking Manly Beach on an Australian summers’ day in February a few years ago…besides the sunny disposition of the locals, it was an amazing travel/food experience…watching surfers at 6p.m…as the sun set, and finished the meal with a Pavlova…but the Balmain Bug, that local Sydney seafood delicacy, is my favorite Australian memory!

4) Kristine, who wrote: “Waking up in my hostel and saying to my friend, ‘We’re going to scuba dive the Great Barrier Reef today!’, hiking to the point where Steve Irwin died. Driving on the left side of the road and having a wallaby run across. Stopping to see wild koalas lounging in the tree, so close we thought they were animatronic. Sadly recounting that the only kangaroo I saw was dead on the side of the road. Saying “TA,” trying to fit in, but feeling ridiculous…even if it is custom there.My memories can be thought of as stereotypical — kangaroos, koalas, the Great Barrier Reef…but God gives everybody 24 hours in a day and I felt the way I experienced them were unique to me in ways that only I can remember.” 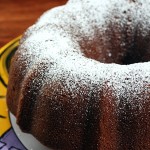 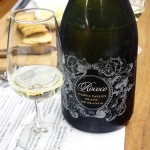