A Look at Locanda da Eva in Berkeley How many food bloggers dream of owning their own restaurant?

A show of hands, please.

The long-running restaurant site had been vacant for more than a year when Lauriston decided to take it over. He jokes that his writing background came in handy for crafting a Craig’s List ad that enticed his chef-partner, Huw Thornton, to come on board. Thornton was formerly executive sous chef at SPQR in San Francisco under then-head chef, Nate Appleman. He also worked at SPQR’s sister restaurant, A16, for two and a half years.

As you can guess, Locanda da Eva’s daily changing menu is Italian-focused with occasional excursions to other parts of the Mediterranean. On the menu, vegetarian dishes are noted, as are others that can be prepared vegetarian on request.

Last week, I had a chance to sample some dishes, when I was invited in as a guest of the restaurant.

For 37 years, the site had been home to the popular Mexican restaurant, Casa de Eva.  After the owners retired, Jim Maser of Cafe Fanny in Berkeley, opened Mazzini Trattoria in its spot. He installed a wood-burning pizza oven and had Berkeley Mills spiff up the interior with custom woodwork.

The interior still calls to mind a taqueria with its bare-bones tables. Mexican folk art-inspired, oil on wood paintings by Sonoma County artist, Laura Hoffman, grace the dining room walls. If you fall in love with any one of them, you’ll be glad to know they’re also for sale. Of course, my husband and I couldn’t pass up trying a pizza.

And of course, we couldn’t say ”no” to one topped with the porky goodness of house-made lardo.

The crisp, thin crust ($14) with blackened edges was covered with wilted kale, some of which had turned delightfully potato chip-like from the blistering heat of the oven. If you’ve never tasted lardo, now’s your chance. The cured pork fat is sliced as thin as can be and gets virtually melty when it comes in contact with the heat of the oven or the inside of your mouth, where it fills every crevice with profound, rich pork flavor. The kale adds a nice complement, with its slight vegetative bitterness.

Local calamari ($11) was featured in an appetizer with nutty garbanzo beans, slivers of avocado, powdered Italian peppers, leaves of peppery greens, and a lemon-herb vinaigrette. Try to grab a forkful that features a little bit of everything or else it won’t taste quite as complex. Crostini of chicken liver with guanciale mousse ($9) won’t win points on looks with the cement-hued spread. But the taste will win you over. Smooth, creamy and with that touch of minerality from the liver, it’s delicious with the added drizzle of saba, a vinegar made from the same grapes as balsamic, but isn’t aged or fermented.

My husband’s rigatoni with chicken and pork ragu ($17) surprised us both with its wine-based, rather than tomato-based sauce. Toothsome little cylinders of noodles were tossed with sharp mustard greens and piquant Grana Pandana in a lightened up meat sauce that was homey and comforting. My griddled local albacore ($19) brought a generous piece of fish that had a nice sear on top. It’s almost mackerel-light in flavor. A tangle of roasted Italian peppers added pleasant sweetness. It came with a choice of sides. Mine was the sturdy romano beans given more pow with red onions, mint and a shower of crunchy breadcrumbs. 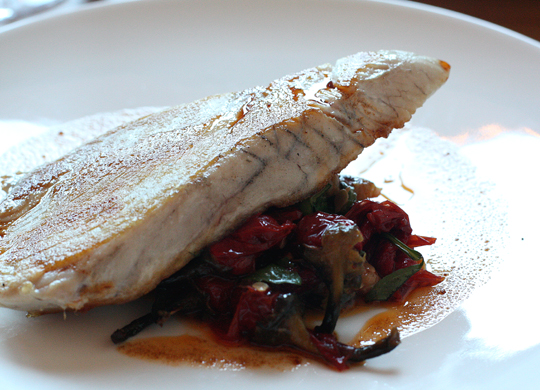 We ended with a unique looking version of a bittersweet chocolate-peach crostata with basil-flecked whipped cream ($8). Muffin-sized and -shaped with the texture of a heavenly morning bun with crisp, sugary edges, it was a satisfying dessert that would have made one decadent breakfast treat, too. The bittersweet chocolate, the flavor and texture of that found in a pain au chocolate, was divine with the caramelized slices of sweet fruit. Lauriston probably won’t be reviewing restaurants now that he has his own business. But you can still enjoy the fruits — and pizzas — of his labor, just in a different way now at his fine neighborhood joint. 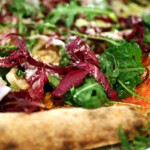