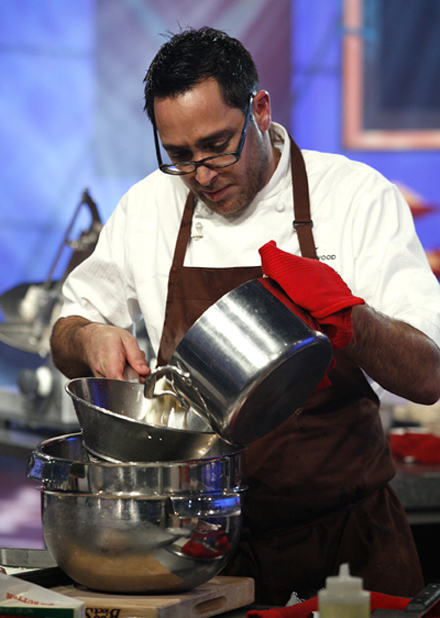 When I first started my Food Gal blog in 2008, Chef Christopher Kostow, who had just landed at the Restaurant at Meadowood resort in St. Helena as its executive chef, was gracious enough to be spotlighted in my first “Take Five Q&A.’’

In that interview, the Michelin two-star chef who celebrates his 34th birthday this week, famously said he’d never want to be on a show like “Top Chef’’ because he couldn’t fathom he’d gain anything from it. That may be so, but this Sunday, Sept. 5, you can tune in to watch Kostow tackle another cooking competition show instead –- “Iron Chef America’’ –- when he goes up against Iron Chef Cat Cora.

Yesterday, I chatted with him by phone about why he decided to make the leap into this reality TV cooking arena, and how he coped with his lifelong personal aversion to this particular “secret ingredient.’’

Q: So you remember what you said to me about ‘Top Chef,’ right? So, why go on ‘Iron Chef America’ then?

A: I still don’t have anything to gain from ‘Top Chef.’ But ‘Iron Chef’ is one day or just a few hours really. It’s good exposure, especially when you have a restaurant in Napa that’s off the beaten path. I didn’t miss any time in my kitchen, either, which was important to me.

Q: Are you a fan of these types of shows?

A: Not really. I don’t really watch much food TV. I don’t want to go home and watch people scrambling around, cooking food, because I see that when I’m at work.

I think TV is a double-edged sword. It has raised awareness among the populace about what we do. But there’s a false sense about it. People think we run around all day competing in the kitchen. In some ways, it demeans what we do. I take this all with a grain of salt. We’ve done a lot in this restaurant, but I find it amusing that this is the thing everyone wants to talk about. At the end of the day, that’s why chefs go on TV.

A: I went back and forth about it. I’m not a chef shut-in by any means. I like talking to people. I like being in the dining room. But I didn’t want to present my food in a style that wasn’t me. In the end, we presented things on the show in a manner that we were comfortable with.

A: It was the first time I met her. It was filmed a year ago. And then last December, she was part of our “Twelve Days of Christmas’’ (when 12 renowned chefs pair with 12 Napa Valley vintners for a series of holiday feasts). It was fun. I enjoyed meeting her and her team. 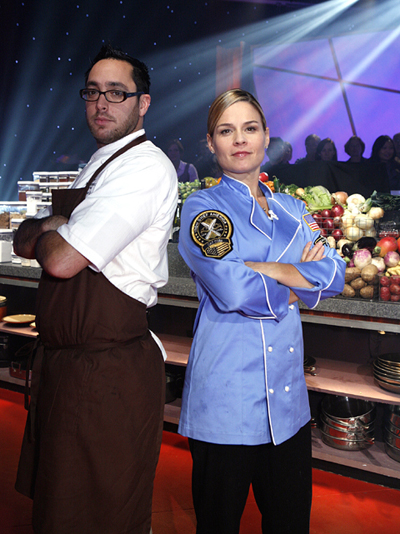 Q: What hint can you give us about the secret ingredient?

A: It was an ingredient I don’t like eating at all. I never have. But it’s very versatile. It’s often used in pastry or in a sweet realm. But we did some savory applications with it. I still don’t care for the ingredient. I haven’t touched it since.

Q: So, you won’t be featuring any of your ‘Iron Chef’ dishes on the menu at Meadowood?

A: No. The ingredient doesn’t really have a place here.

Q: Will you watch the show or have a viewing party?

A: I’ll actually be up in Portland then, visiting my girlfriend’s parents. But we’ll be doing a showing at the Cameo theater in St. Helena on Sept. 9.

A: You’re in a foreign environment. You don’t know where anything is. Someone has a camera in your face. A clock is going. People are talking to you. There are wires to trip over. That all makes things trickier for sure.

Q: Who were your assistants in the battle?

A: My sous chef at the time and my former sous chef from Chez TJ in Mountain View. That was the most enjoyable part — hanging out with my two former sous chefs, who are good friends. We went to Fette Sau in Brooklyn afterward. You are filming for a good long time. It’s tiring. Then, you go eat barbecue and drink whiskey. It’s pretty good.

Q: Where did you have your last great meal?

A: I really like what Matt Accarrino is doing at SPQR in San Francisco. I like his food a lot. It’s really tasty. He takes a lot of pride in what he does. And Soyoung Scanlan (cheesemaker of Andante Dairy) did a barbecue for some of us at her house. It was amazing.

Q: If you could invent your own cooking show, what would it be like?

A: I like this old PBS show. It had European chefs on it. They would just cook on it. It was like, ‘Here’s some guy and here’s how he makes his dish.’ I think that’s what people are going to want more of. Chefs have struggled in the wilderness for so long to get recognition. And now, we’re hawking everything. I think people will get tired of that.

Q: Will we see you again on any reality cooking shows?

A: Maybe as a judge. I’ll never say never. But I want to focus on what I’m doing here.

Q: Are you working on anything new at Meadowood?

A: We’re working on a new garden-farm project. We want to expand our program here on our grounds. We hope to do it next month. I can’t talk much about it, because it’s not all finalized yet. We might grow some esoteric ingredients. We don’t want to be self-contained and get everything from our garden. We already live in one of the greatest growing areas, so we don’t have to do it all ourselves. We want to involve local kids and education in it, too.

Q: Anything else new in your life?

A: I got a puppy. A German shepherd mix. I’m naming him ‘Iron Chef.’ 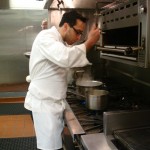 More: My 2008 Q&A with Christopher Kostow 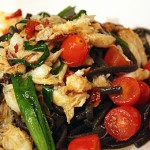 More: My Dinner at SPQR in San Francisco