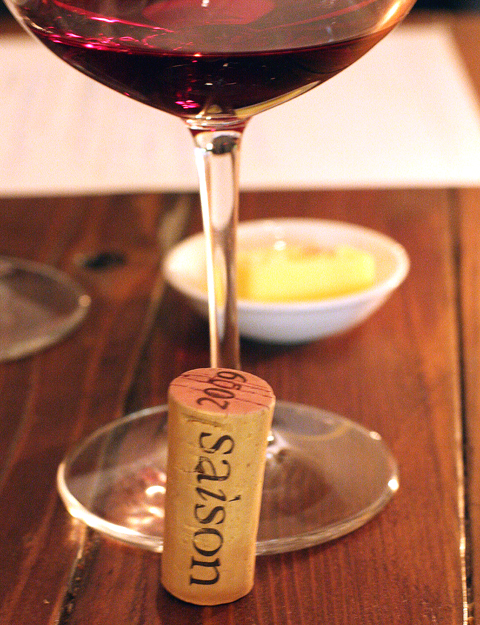 Last summer, much like so many budding tech impresarios of yesteryear,  Chef-Owner Joshua Skenes and sommelier whiz Mark Bright, cloistered themselves away to improvise on what would become a makeshift once-a-week restaurant. Their location wasn’t a garage, but what was once a historic stable that is now the Stable Cafe, which leased its kitchen and rear dining room to the dynamic duo.

From the spacious but far from state-of-the-art kitchen, Skenes turned out elegant, four-star, fine-dining fare served on the best china to jeans-clad diners who sat at bistro-style, slat chairs before cramped, bare wood tables.

The result this summer is version two of Saison — with a lot more waitstaff, a fancy Molteni stove in the kitchen, a large hearth on the redone patio for open-fire cooking, and actual upholstered, cushy banquettes in the dining room the shade of washed denim.

The restaurant has gone from pop-up to permanent. It now serves dinner five nights a week. 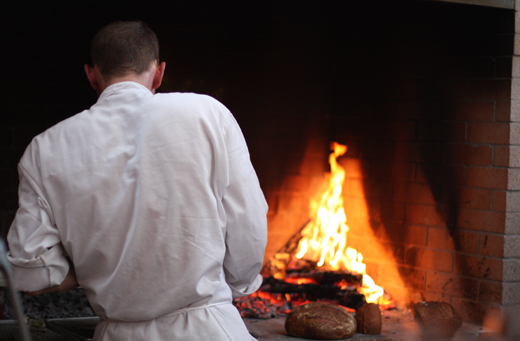 It’s a fitting stage for this young chef and young sommelier to show off their talents. Skenes earned rave reviews when he was at Chez TJ in Mountain View, then impressed the likes of Michael Mina so much that the San Francisco mega chef tapped Skenes to open his Stonehill Tavern restaurant in Monarch Beach, CA. Bright also has a Mina connection. At 17, he started working at Mina’s Aqua restaurant in the Bellagio in Las Vegas. On his 21st birthday, he became part of the Bellagio sommelier team, before being asked to become the opening sommelier at Restaurant Michael Mina in San Francisco.

My husband and I had a chance to check out the remodeled space last week, when Skenes invited us in as his guests to celebrate our anniversary, throwing in a few extra dishes for the occasion.

One eight-course menu is offered each night for $98; with an additional $78 for wine pairings. Big spenders can get a real bird’s eye view of the cooking by sitting at the chef’s counter at the back of the kitchen for a personalized 14- to 20-course dinner that runs $300 to $500 per person, depending upon ingredients used. 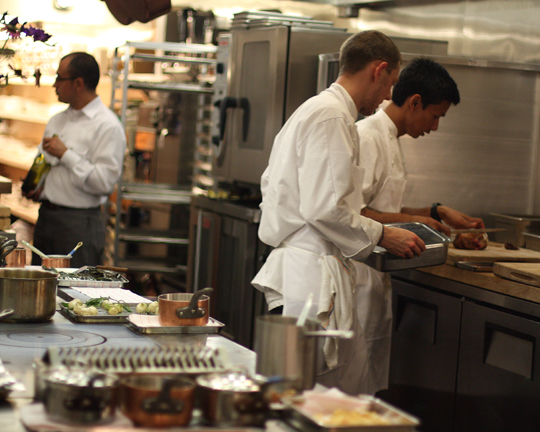 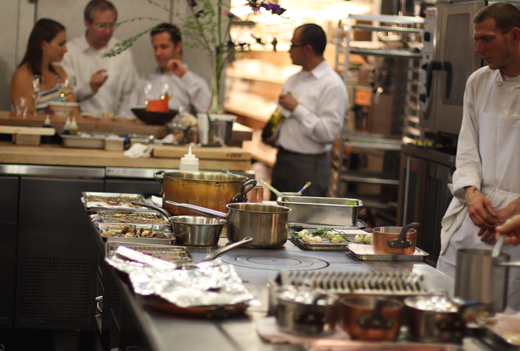 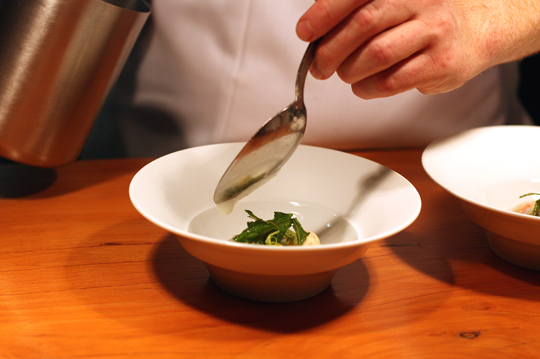 We sat in the dining room, where Bright was eager to have us try a surprise — his own wine, the first he’s ever made.

He proudly carried over a bottle of his 2009 Saison Pinot Noir, which he said only three other people have tried so far. From the label-less bottle, he poured two glasses of the garnet liquid, and explained why he wanted to tackle what is probably the most finicky varietal around for his debut vintage.

“It’s hard to start with it,” Bright said. “But all my winemaker friends said if you can conquer Pinot Noir, the rest will be easy.”

I’d say Bright is on his way. Although he felt the wine needed to settle down a little, I much enjoyed the earthy, leather, cranberry and cherry notes it already showed, like so many of my favorite Oregon Pinots. 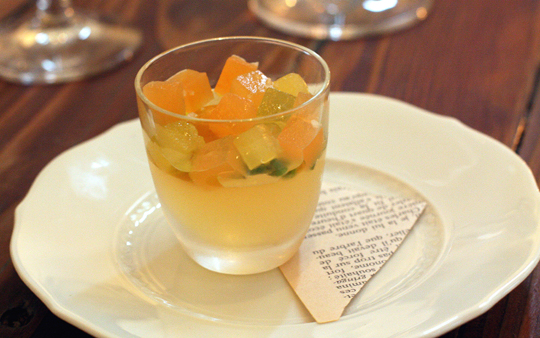 Dinner started with a dainty glass of orange tomatoes and sweet melon with Riesling vinegar gelee that rested artfully on a cut-corner from a French paperback. The flavors were clean and crisp, with thyme flowers that gave an herbal pow. 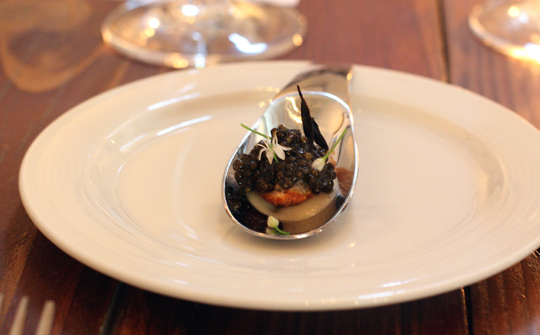 Next, a silver spoon nestling sweet corn pudding and briny caviar — a tiny, yet luxurious mouthful. Thick slices of Acme bread that had been warmed in the hearth arrived with house-churned butter with fleur de sel.

Even though it’s fall now, the next dish sent me happily back to spring again with crisp, raw or nearly so, beans, peas and tendrils that were doused at the table with thick, creamy pea puree. The sweetness of the peas was magical. 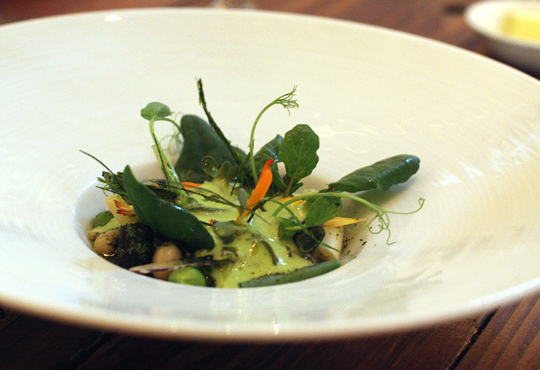 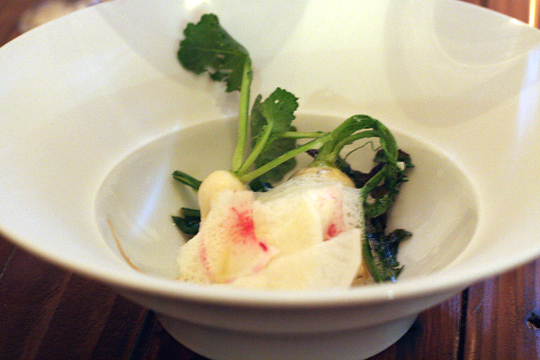 That was followed by a dish of tiny turnips, roasted in the embers, which heightened their sweetness and lent a lovely smokiness to complement the peppery bite of the turnip leaves and the savory quality of the dashi. 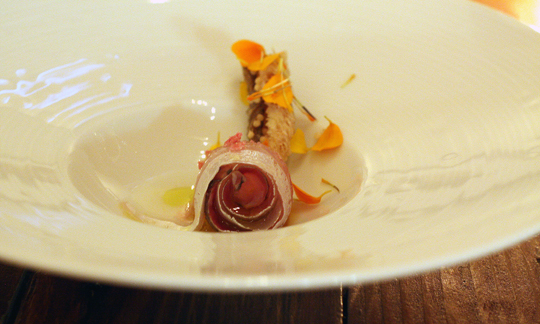 My husband couldn’t help but smile at the next dish. He knows I’m not always the biggest lover of mackerel because the oily fish can be so strong tasting. But I would have eaten seconds and thirds of Skene’s preparation if I could have. A sliver of mackerel was citrus cured, then rolled up with a drizzle of great olive oil. A sliver of skin had been fried so that it was as crisp as a potato chip. Silky and crunchy, all in two bites. 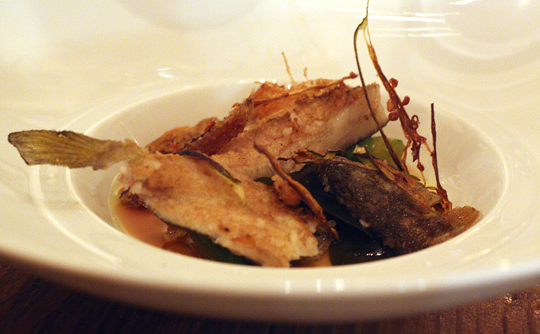 Ayu, Japanese sweetfish, is a relative of a smelt and about as small. It came to the table almost in its entirety, with the head and tiny bones fried to a crisp so that they were all edible. Garnished with seaweed and okra, the flesh was delicate and yes, imbued with a subtle sea sweetness.

With the “radishes and pig head,” dish we expected to be assaulted with jowly, piggy flesh. But the crispy radishes were the star of the plate, with itty-bitty crunchy flecks of pig’s head skin merely an accent to lend an illusive porkiness. 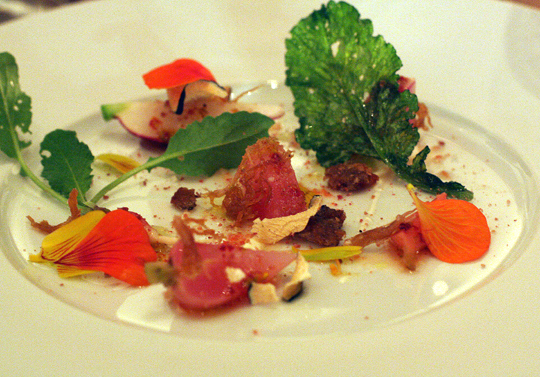 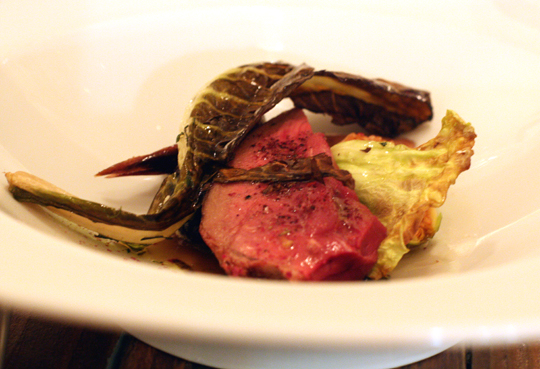 Four Story Hills squab, roasted in fig leaves till still rare, was served with a thick smear of mascarpone and jammy-sweet fresh figs. 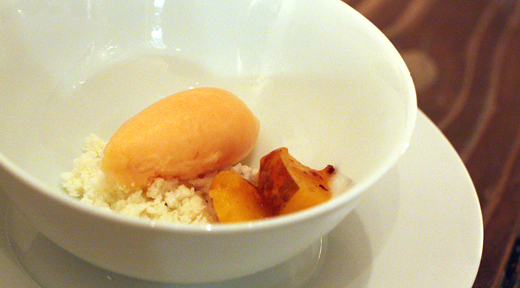 A duo of desserts was ushered in with peaches, which again had been roasted in the embers, then diced to accompany peach sorbet and icy granules of milk granite. It tasted like a peach creamsicle, only with far greater finesse. 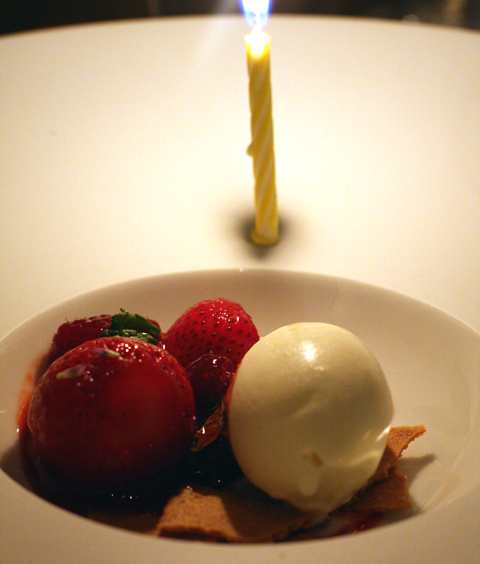 The finale was a refreshing tumble of summer berries with citrusy yuzu ice cream.

The restaurant may be a bit fancier looking now. But its rough-hewn, carefree, bootstraps charm is still evident amid cooking that continues to be top-notch and beautiful looking.

Saison 2.0 is one upgrade that lives up to the fervor . 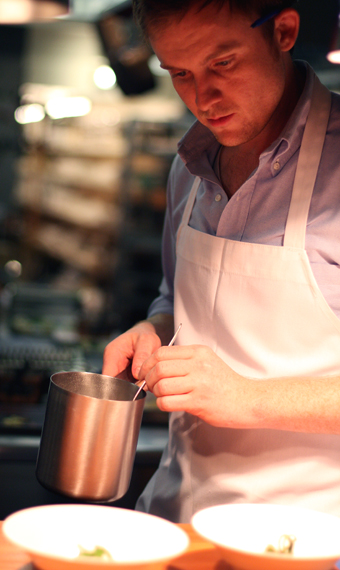 More: My First Dinner at Saison 1.0 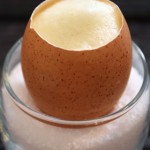