The Brilliance of Benu When a former chef de cuisine of the French Laundry leaves to open his own restaurant, it’s a big deal.

When his former mentor, Thomas Keller, thinks so highly of him as to invest in that new restaurant — the only one Keller has ever poured funds into that wasn’t one of his own — it’s a huge deal.

And when that not even year-old San Francisco restaurant is up for an award on Monday for “Best New Restaurant” in the country by the James Beard Foundation, it’s beyond the realm of  impressiveness.

Or maybe it’s just all according to plan in Chef-Owner Corey Lee’s world.

With Benu restaurant, Lee, who won his own James Beard award for “Rising Star Chef” during his nearly nine years at the French Laundry, set out to create an elegant, serene restaurant in a historic 1912 building that was once home to Hawthorne Lane restaurant, then Two restaurant.

From the start, he wanted to create something extraordinary. Award-winning New York architect Richard Bloch, who created the look of Masa in New York, was brought in to transform the space. And kitchen designer to the star chefs, Tim Harrison of Harrison, Koellner, LLC in Mill Valley, took charge of creating a brand new kitchen here from scratch, one that boasts a rare feature — a wall of windows to let natural light in. Lee was already familiar with Harrison’s work, as he also created the kitchens for both the French Laundry and Per Se. 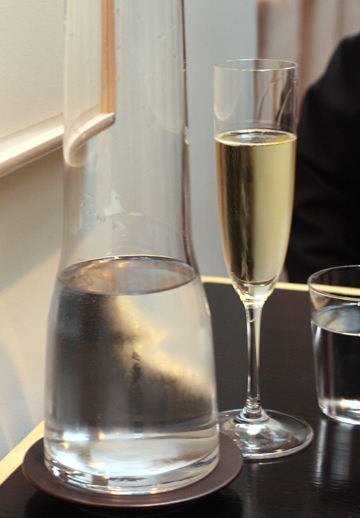 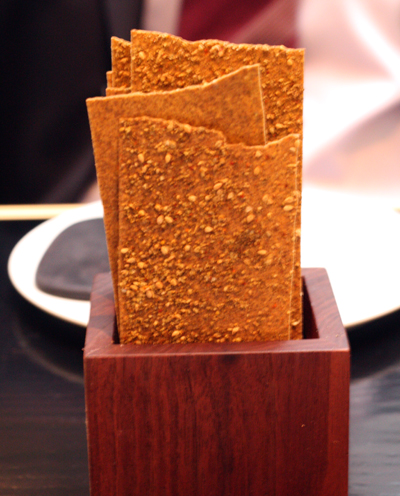 Recently, I treated my husband to dinner at Benu for his birthday. Choose either the tasting menu or a la carte options. Although I paid for the $160 per person tasting menu we each had, Lee, whom I interviewed extensively last year for a profile story in Food Arts magazine, was kind enough as to give us the wine pairings on the house, about $110 per person.

After visiting the site last spring, when it was a mere construction zone, it was amazing to see what it had become. On a rainy night, we drove past the large iron gates and into the Japanese-inspired garden courtyard with maple trees and flowering vines. As I got out of the car, a valet immediately approached with an open umbrella, which he handed to me. Then, he escorted my husband and me down the short path to the restaurant’s front door, where he let us in and retrieved the umbrella from me.  Talk about being taken care of right from the start.

The interior is all soothing grays and earth tones. A dramatic light well gives the main dining room a sense of airiness.

The tasting menu is composed of about 16 courses. That may seem like a lot, but they progress from precious, jewel-like, one-bite morsels to more substantial ones as the courses go on. Lee, who is Korean-American, may use a lot of molecular gastronomy and classic French techniques, but he also draws on his Asian roots, so that the dishes don’t rely on lots of butter or cream for flavor. Indeed, even after about 16 courses, you will leave very satiated, but quite comfortable.

Instead of the usual baguette or other artisan bread, dinner here starts with buckwheat lavash imbued with nori and sesame seeds. Paper-thin, they have the flavor of brown bread and the aroma of an umami bomb. 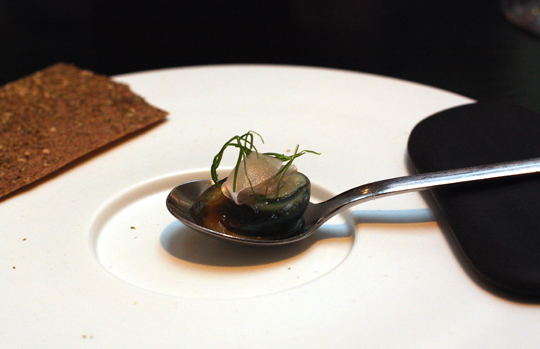 If you’ve ever eaten a Chinese thousand-year-old egg, you know it’s one of the funkiest things you’ll ever taste. Lee’s refined take on it comes in the form of a thousand-year-old quail egg. Draped with a little ginger and scallion, and nestled on a spoon, it’s far daintier and with a much more mild taste.

Housemade tofu was as creamy and silky as custard, floating in a delicately floral broth of chyrsanthemum and black moss. 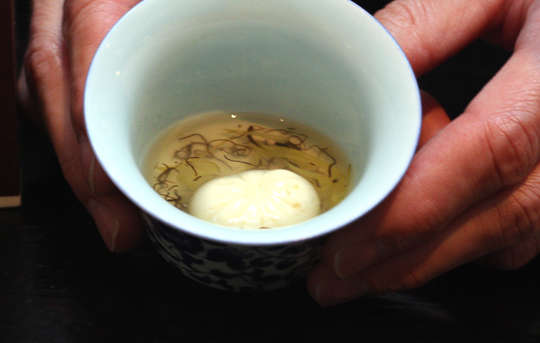 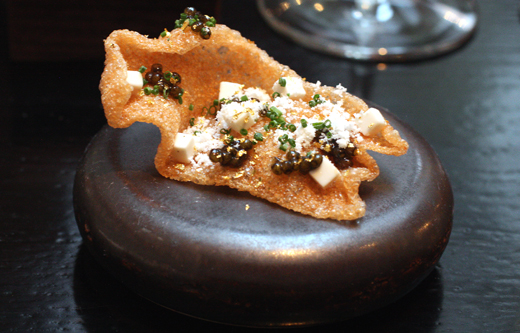 Next up, Lee’s version of a shrimp chip — only this one was a glam lobster cracker. Cracklingly crisp like a chiccarone, it provided a platform for tiny squares of bone marrow that burst with unctuousness with each bite. Another tiny morsel followed — bacon wrapped around egg yolk, then topped with caviar. It was like the most refined bacon and egg dish you could ever imagine — all in one bite.

The next morsel totally surprised. It was billed as a “brioche” even though what arrived was a miniature gelee cube topped with caviar. Yet take a bite and the gelee tastes exactly like bread. How cool is that?

A study of textures and temperatures, the next bowl arrived holding cold cubes of cooked potatoes, uni, potato foam and specks of black truffles. A warm vichyssoise was poured tableside to bring it all together. The next dish would make one of the greatest snack foods around. Eel fried up into a thin, crisp cigar that arrived on an ashtray-like dish with an indented groove designed to hold it perfectly. Alongside was lime creme fraiche for dipping. My husband and I could have wolfed down a dozen of these. Apparently, we’re not the only ones. Head Sommelier Yoon Ha told us an amusing story about a group of men who came in for an early dinner one night. They were headed to a game at AT&T Park afterward and joked they’d love a bag-full of the fried eel to take with them. But alas, since the kitchen only makes a certain amount of them each night, they had to settle for garlic fries at the stadium instead. 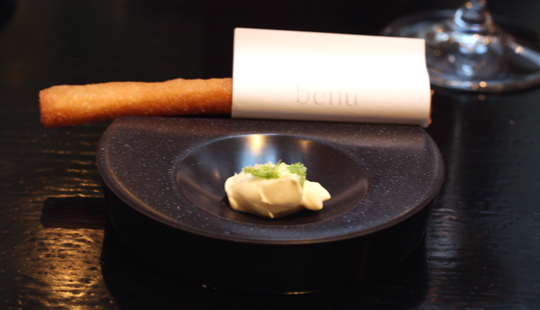 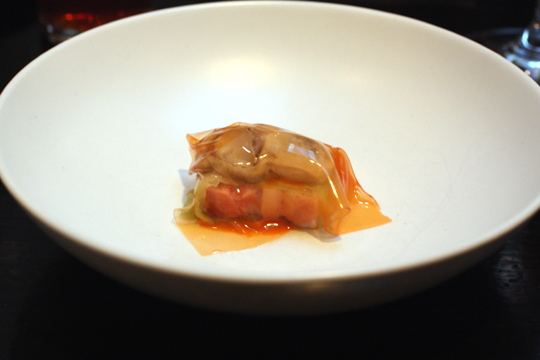 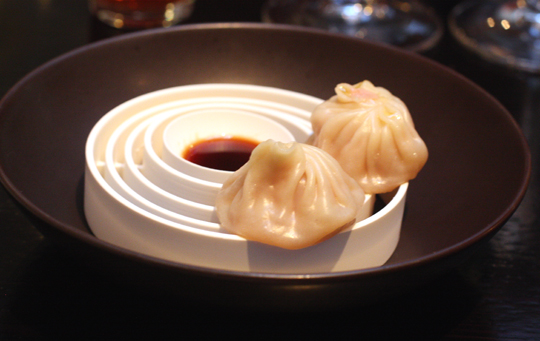 A plump oyster with pork belly arrived sealed in a gelatin membrane. It was a voluptuous duo with spice and smoke, almost mirroring the familiar flavors of kimchi.

Two dumplings arrived next, perched on an artful serving dish of concentric circles, with the center one holding a dipping sauce. The xiao long bao were stuffed with foie gras and broth. Though the wrappers were a little thick at the top, the broth inside was wonderfully rich and warming.

I admit that Japanese mountain yam, with its sticky, almost slimy texture, is usually not one of my favorite ingredients. But Lee’s subtle use of it and ability to transform it into a pleasing crisp dice with briny bottarga, citrusy yuzu foam and sorbet made from sake lees (the solids left over after filtering sake) made a believer out of me. 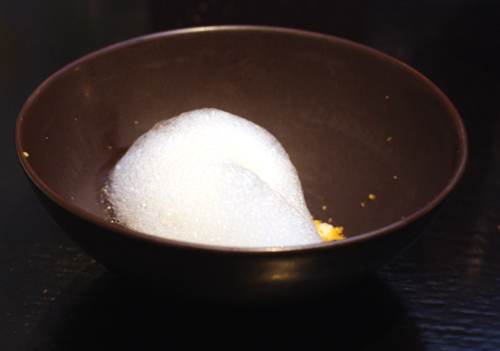 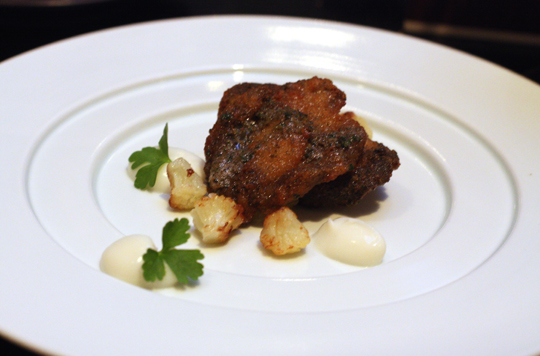 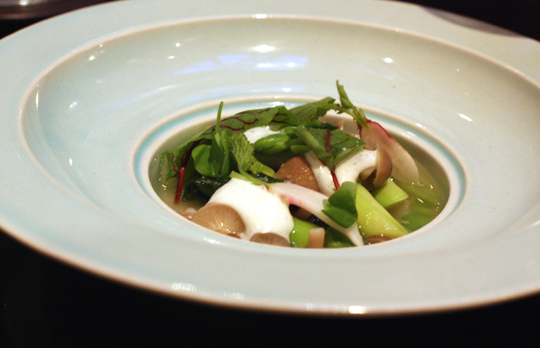 Perfect crisp slices of luxurious abalone arrived next. It was followed by a beautiful dish of spring vegetables that included asparagus, favas and radishes arrayed in a bowl of dashi with parmesan cream. The broth was so deceptive. It was thin and weightless, but packed a ton of savory-ocean flavors.

Next, the traditional foie gras torchon reinvented — this time with monkfish liver instead. Served with thick slabs of buttery brioche, the torchon was as smooth as panna cotta with the sweetness of apple and piquant mustard to round it out. 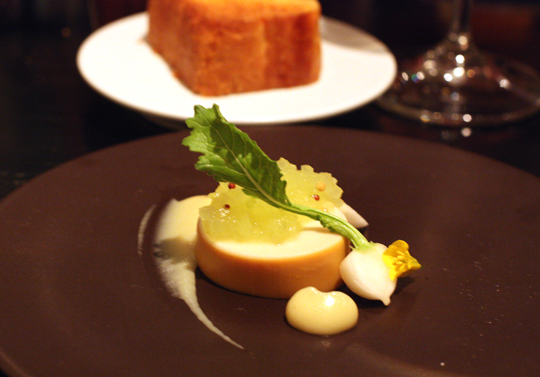 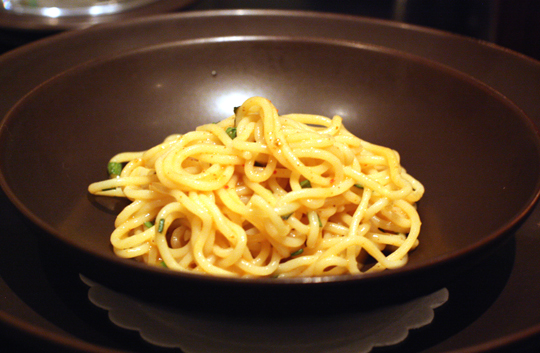 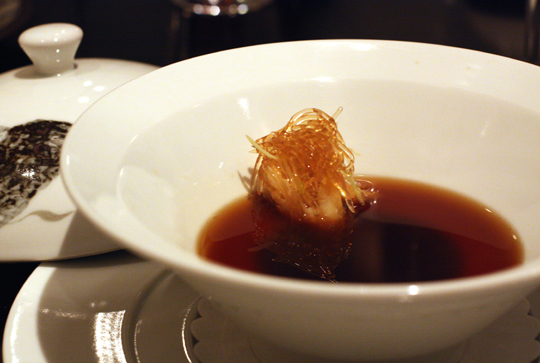 My husband joked that the next dish ought to have been called “the world’s fanciest chow mein.” But then, that’s almost what you have with these toothsome, fresh noodles made in-house, then tossed with pungent shrimp roe and chicken jus. Now, if only my neighborhood Chinese take-out joint could make a rendition half as wonderful.

Lee already has grown famous of one dish in particular at Benu, and rightly so. His faux “shark’s fin” soup evokes the pricey, Chinese-banquet staple. But it’s far more PC, as these slippery, elastic strands are not made from the actual fins of over-fished shark, but from seafood broth that’s been turned into a very thick liquid that’s then squirted into cold water to set it into the familiar fine threads. The soup is incredibly savory and complex. An earthy truffle custard the color of charcoal hidden on the bottom made it even more refined. 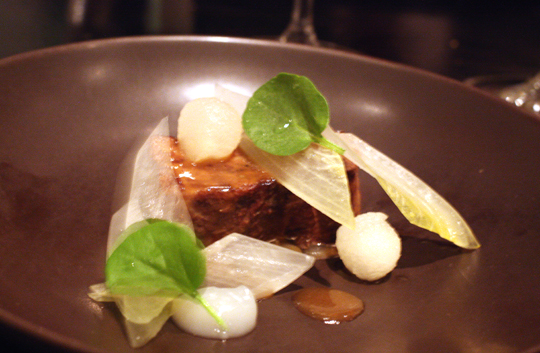 Braised beef was beyond meltingly tender. Little orbs of sweet pear added fruity sweetness, while compressed endive, that was soft but still crunchy like an onion, added texture.

To cleanse the palate, there was an intense cucumber sorbet with rhubarb. 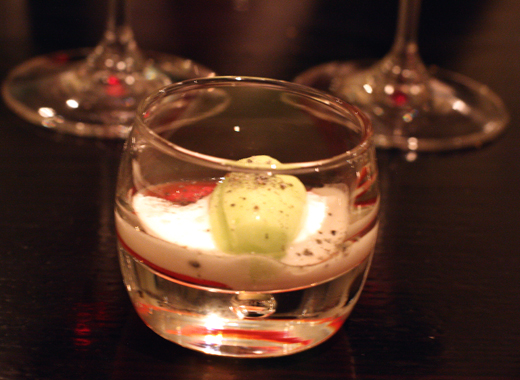 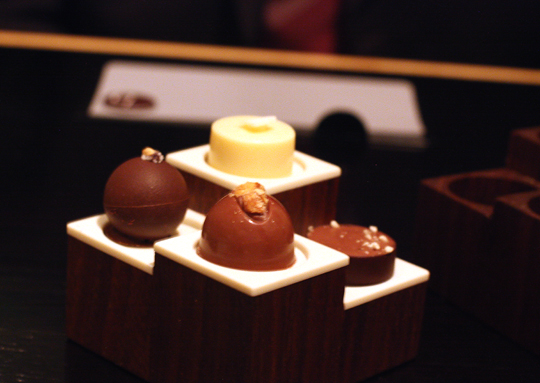 Dessert also was refreshing for its restrained sweetness. Banana ice cream arrived with ginger gelee and acorn pudding that was silky, nutty and hearty tasting.

Lastly, a square wooden box was delivered to the table. When the top was removed, it revealed itself like a Japanese tansu chest with stair-stepped compartments to showcase each chocolate on its own stage.

So many “next big things” fail to live up to their hype. But Benu is one that truly does. 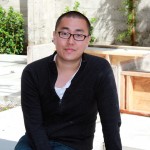 More: Some Before and After Photos of Benu During Construction