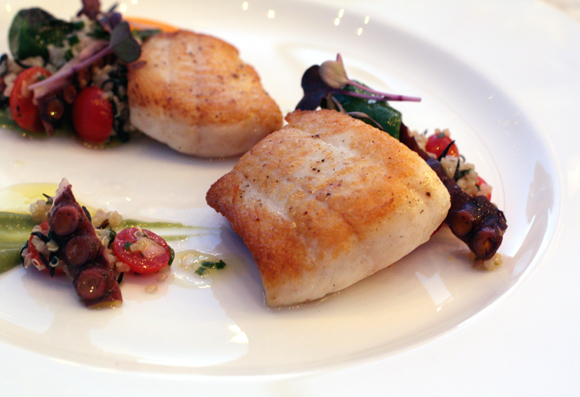 Thirty years ago, when most of the Napa Valley was still mostly farms and Michelin-worthy restaurants were practically non-existent, two men had the foresight to build a French-style, fine-dining restaurant on a magnificent hillside in Rutherford.

Robert Harmon, who had developed condo resorts in Hawaii and Lake Tahoe, teamed with legendary French restaurateur Claude Rouas, who owned L’Etoile in San Francisco, to create the restaurant at Auberge du Soleil. Four years later, the intimate 50-room inn was constructed. Now, the company, Auberge Resorts, operates a total of eight luxurious properties throughout the United States and Mexico.

The restaurant now boasts a Michelin star and quite the stellar list of chefs who have worked there, including the-late Masataka Kobayashi (founder of Masa’s in San Francisco), Albert Tordjman (owner of the quirky Flying Saucer in San Francisco), Richard Reddington (now owner-chef of Redd in Yountville), and Joseph Humphries (most recently, the head chef of Cavallo Point in Sausalito).

Chef Robert Curry, formerly executive chef of the restaurant at the Culinary Institute of America at Greystone in St. Helena, has headed the kitchen for six years now. 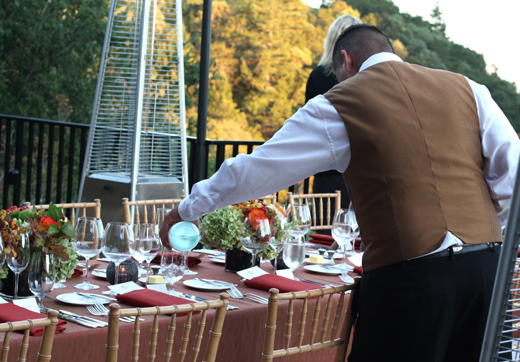 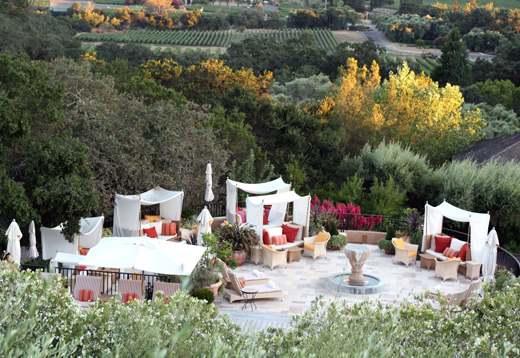 Last week, he created a special dinner to celebrate the restaurant’s monumental anniversary. The four-course meal, which featured dishes influenced by each of the past three decades, was a private affair, enjoyed by Robert Harmon, his son Mark (CEO of Auberge Resorts), and a small group of local food writers, including yours truly.

The dinner was held outdoors on the new deck overlooking the resort’s pool and surrounding vineyards.

The first course was butter-poached Maine lobster, as silky as can be. For more hedonism — and weren’t the ’80’s all about that? — there was a slab of seared foie gras. Mustard and pickled apples added a bracing touch to all that richness.

That was followed by petrale sole, roasted with thyme, and served with summer’s glorious heirloom tomatoes, Padron peppers and fragrant lemongrass vinaigrette. 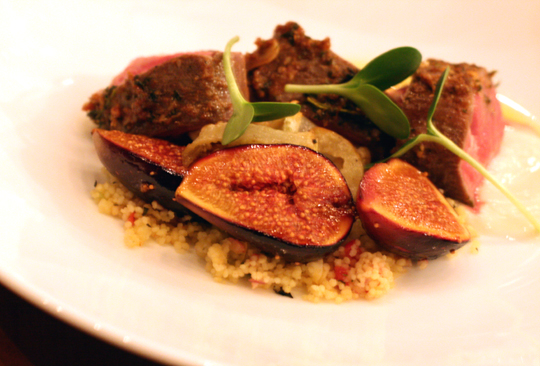 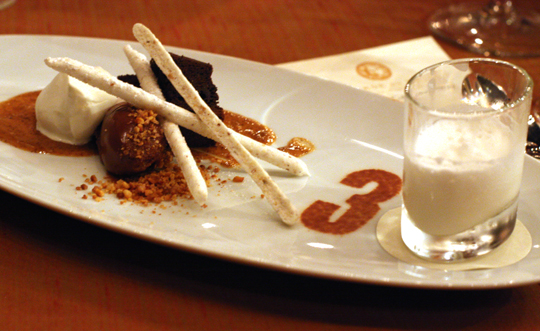 Dessert brought a deconstructed version of the resort’s famous “Auberge Torte au Chocolat,” made up of hazelnut dacquoise, chocolate cremeux, hazelnuts and dark chocolate ganache. Rather than a slice of torte, there were several separate components on the plate, which, when eaten together provided the same over-the-top decadence. A stencil of cocoa powder alongside a tiny glass of ice milk cleverly “spelled out” the number “30” on the plate.

Afterward, I retired to my room. Or shall I say, suite, which Auberge kindly provided gratis so I didn’t have to make the long drive back to the South Bay that night. The 1,254 square-foot abode was larger than most apartments I’d ever lived in. And did I mention, it came complete with three flat-screen TVs? 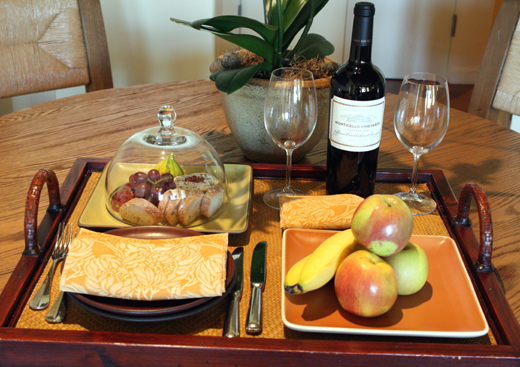 Auberge is known for its thoughtful touches, from my name adorning the mail box in front of the door to my private patio to a welcome treat of charcuterie, cheese, fresh fruit and wine already laid out on the dining table. 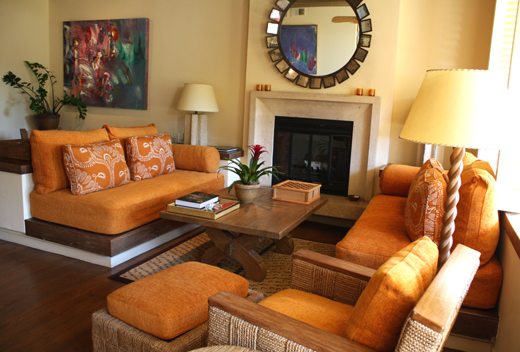 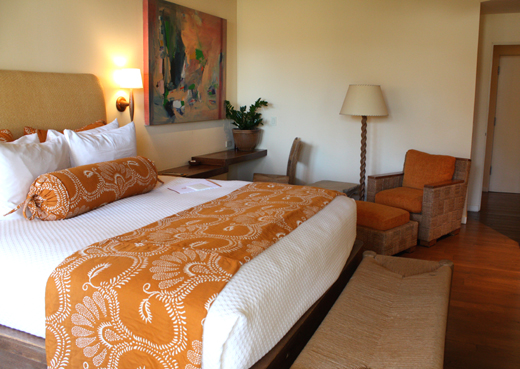 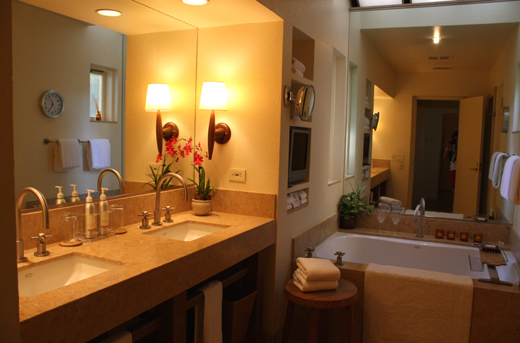 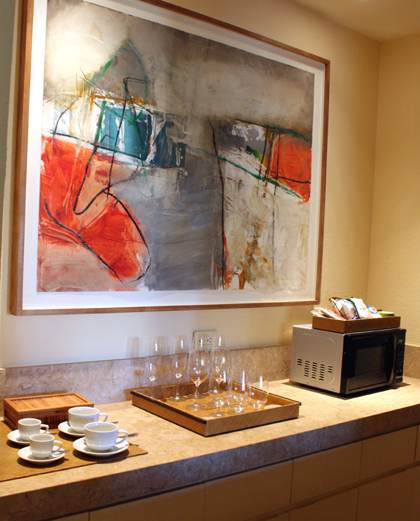 The suite featured a large, lounge-y sitting area with fireplace, a filled candy dish, and checkerboard set; a separate bedroom with crisp linens and a tropical ceiling fan; and a huge soaking tub in the bathroom surrounded by candles. Moreover, there was a separate butler’s pantry with gourmet snacks, plus a Sub-Zero refrigerator filled to the brim with all manner of beverages — all of which could be enjoyed without any added charges. Yes, Auberge does not believe in making one pay for anything from the mini bar.

At turn-down, soft robes are arrayed on your bed with matching slippers; along with a tray with chocolate-covered almonds, a lavender sachet, a carafe of filtered water, and towelettes that can be microwaved to warm them up for your added relaxation.

I could have stayed there forever. 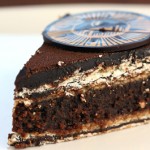 More: How to Enjoy Your Own Magnificent “Auberge Torte au Chocolat”