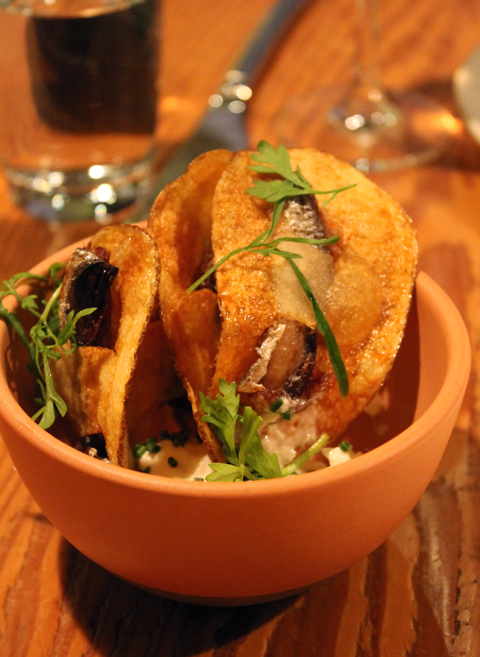 “I didn’t want to spend the rest of my life in New York,” Sarah Rich says. “I knew if we didn’t leave then, we’d never leave. So, I convinced him begrudgingly to give San Francisco a shot.”

The move proved beyond fruitful, and Bay Area diners are all the better for it.

Last summer, the couple opened their own restaurant, Rich Table in San Francisco’s Hayes Valley neighborhood, on Sara’s birthday (July 26). Diners have been celebrating ever since then by packing into the 60 seats here. 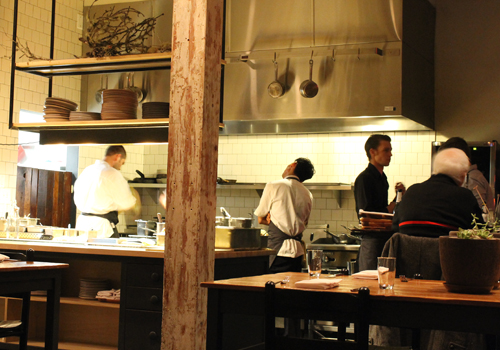 The couple set out to create a restaurant they would want to eat at on their days off — casual, comfortable, yet with food cooked with impeccable ingredients, thoughtfulness and exemplary technique.

Recently, I was invited in as a guest of the restaurant, with its bustling open kitchen, and rustic-chic reclaimed wood tables and walls.

Of course, my friend Ben of FocusSnapEat and I had to start with the now famous sardine chips ($7). Evan Rich learned to make them at Bouley. Now, a starter on the “Bites” side of the menu, they have now become a must-order at Rich Table.  They’re like over-sized potato chips fried with a sardine woven into each one. How cool is that? You get four to an order, standing up in a small bowl with a big dollop of horseradish cream on the bottom. It’s like the most creative chips and dip combo ever. 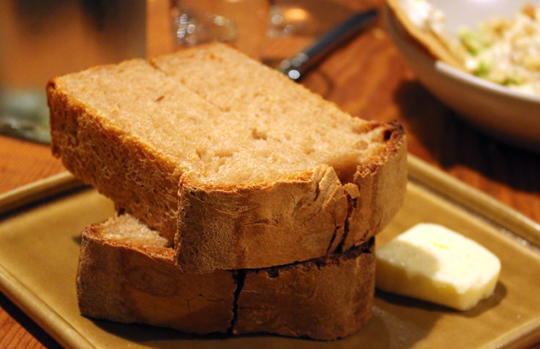 Bread is extra here. That’s because despite a tiny kitchen, they manage to bake their own in-house. It’s well worth getting, too. The sourdough levain ($4) comes with house-cultured butter. The bread is baked in a big loaf pan, so you get huge, thick slices just made for smearing the creamy butter all over. It’s heartier tasting than your traditional San Francisco sourdough loaf yet boasts the requisite fermented tang. It’s even good the next day, toasted for breakfast. The restaurant will happily pack up any extra slices you don’t finish for you to take home, too.

A Little Gem salad arrived at the table, crowned with an ample amount of Dungeness crab and a huge house-made saltine cracker ($13). The crab added a luxurious note to the crisp greens. You could break up the cracker to make like croutons or use it to scoop up the salad to eat with your fingers. 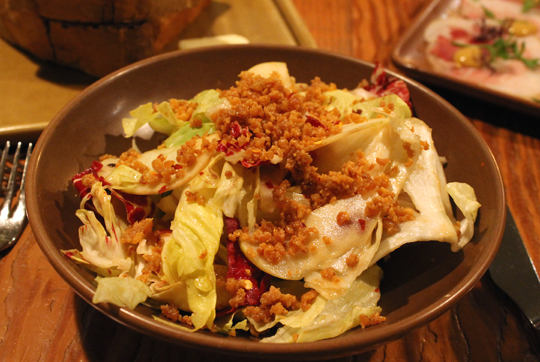 Another salad of chicories and apple ($11) sounded innocent enough — until you got to the crunchy crumbles of fried chicken skin on top. And believe me, you want to get some in every forkful because they are a delightful addition to just about anything.

The kitchen sent out a platter of coppa, made just days ago. Made from cured pork shoulder and cut paper-thin with a rim of lovely fat, it just melts in your mouth. Dabs of mustard and peppery micro herbs helped cut through the rich meatiness. Except for the spaghetti noodles that are imported from Italy, Rich Table makes all its pastas in-house, including tagliatelle with pork ragu, the surprising crunch of toasted almonds and juicy, crisp chunks of apples ($17). You already know how well pork takes to fruit, so imagine it all over wide, tender noodles. Sublime.

Even Brussels sprouts haters won’t be able to get enough of the garganelli ($18) tossed with the separated green leaves, as well as pork trotters, a fine dice of pears, and the wonderful blast of horseradish that revs up the sinuses but dissipates in time for you to enjoy another mouthful. The restaurant definitely has a way with incorporating fall-winter fruit into the pastas, adding a roundness to them. 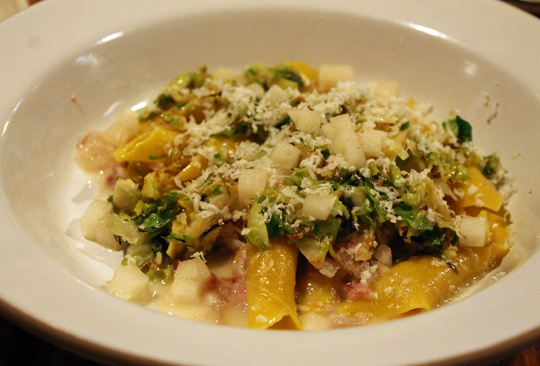 Rabbit ($24) gets all done up here, with the loin rolled up and sliced into neat, uniform medallions topped with the vegetable of the moment, lacinato kale. Dig in and you’ll also discover a golden, crisp patty of comforting levain stuffing.

Sara Rich, who has experience working in both the sweet and savory sides of the kitchen, does the desserts ($9 each), which are none-too-fussy.

The caramelized olive oil cake never leaves the menu because it’s just that popular. The moist cake is dipped into sugar then seared in a hot pan, leaving the edges sugary crisp like a creme brulee. At this time of year, it’s served with a tropical guava sorbet and fresh kiwi. The technique is a great one to use on your own cake wedges at home.

The caramel panna cotta comes in a deep bowl blanketed in coffee crumbles, which look like topsoil. The texture of the panna cotta is very soft, much more like pudding than the classic rendition. 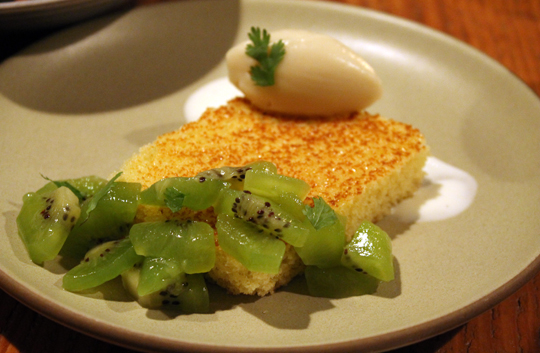 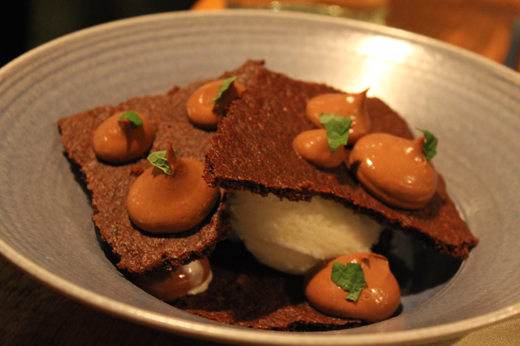 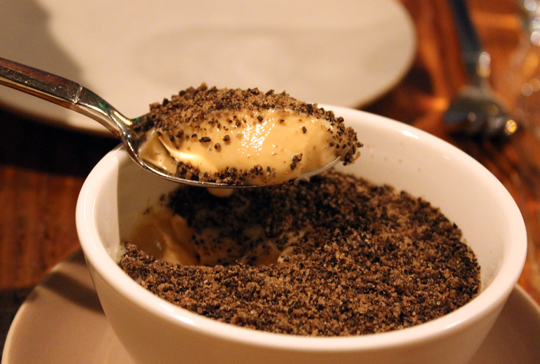 Rich Table is the kind of place you can come in jeans, put your elbows on the table and enjoy dishes that will satisfy without making you think too hard. It’s just what Sarah and Evan ordered. 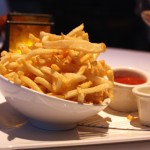 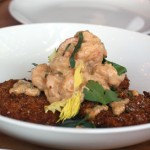 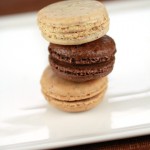