An Elegant Voyage Awaits at The Sea by Alexander’s Steakhouse If Tiffany’s recast itself as a restaurant, it would resemble The Sea by Alexander’s Steakhouse.

All vestiges of tiki-dom have been thoroughly excised from the former Trader Vic’s on El Camino Real in Palo Alto. In its place, the upscale The Sea launches itself in a shimmery, sophisticated palette of watery blues, grays and white. There’s a glass-fronted kitchen and one wall in the dining room with insets for vases of  striking white orchids.

As the name infers, The Sea is the newest concept by the owners of Alexander’s Steakhouse, with locations in Cupertino and San Francisco. Even before it opened, The Sea experienced some troubled waters, what with the abrupt letting go of Jeffrey Stout, the founding chef of Alexander’s and chief operating officer. But if my recent visit as a guest of the restaurant was any indication, The Sea seems to be navigating a smooth course in the hands of Executive Chef Yu Min Lin, whose impressive credits include a stint as chef de cuisine at Providence in Los Angeles, as well as stages at the French Laundry in Yountville and Manresa in Los Gatos. He’s also a trained sushi chef. This is a restaurant that definitely pays attention to the details. You are provided hot towels at the start to pamper your hands. The table is de-crumbed after every course. The bread is made in-house and there are several to choose from. Coffee service at the end of the meal comes on its own compact tray, complete with a chocolate bonbon. 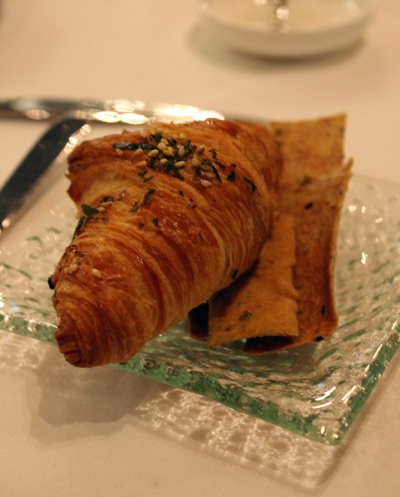 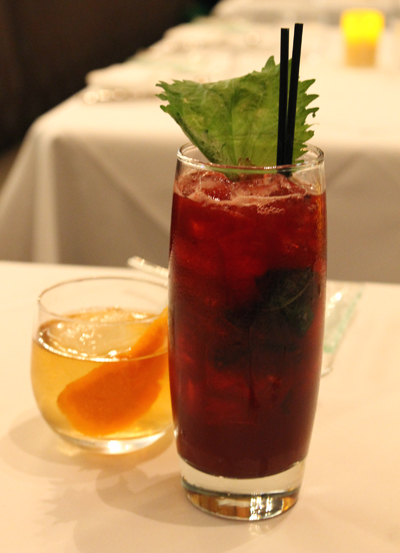 Those who have dined at Alexander’s Steakhouse will find a few familiar items on the menu, including the wildly popular hamachi shots ($12) and the top of  the line A5-grade Wagyu steak.

That evening, the amuse was a morsel of Spanish sardine brightened with Meyer lemon and gelee made from the grassy Japanese shisshito pepper. My friend Donna started with the Dungeness crab salad ($20). Large chunks of crab are arranged over sticky purple rice that’s actually made into sort of a large sushi roll with more crab in its center. Blood orange and ginger creme fraiche play off the incredible sweetness of the crab. The “It” ingredient of the moment, chia seeds, make an appearance as a garnish, too. 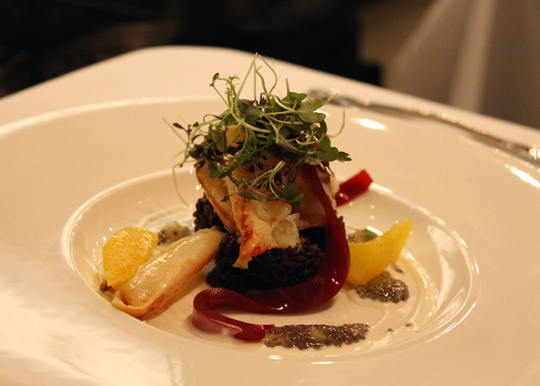 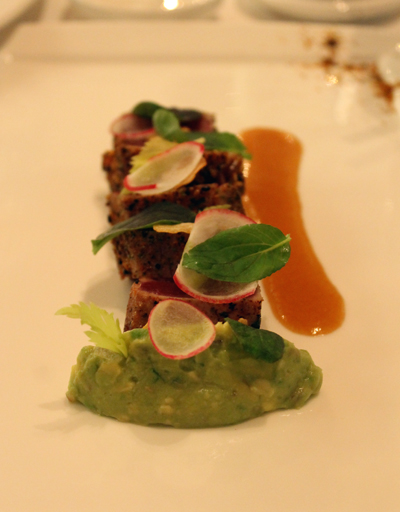 My tuna tatake ($18) — wild from Hawaii — was the best seared tuna dish I’d had since I last traveled to the islands there. The freshness of the tuna was so apparent. The flesh was firm, bright and sweet. A quenelle of mashed avocado added lushness while garlic chips gave a nice crunch to each bite.

Mero ($40), Hawaii’s answer to Chilean sea bass, was silky, flaky and crowned with sauteed broccolini. Port wine sauce ringed the dish to give a lovely fruitiness. 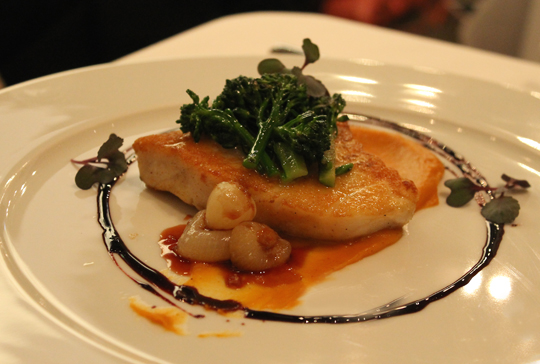 I opted for a special — live scallops ($42) flown in overnight from Maine. Three very large ones were sauteed with a perfect golden crust and served with puddles of nutty parsnip puree and wine reduction, as well as a small bed of barley risotto. The accompaniments were all in restrained amounts, all the better to let the glorious, plump scallops be the true hero of the dish. 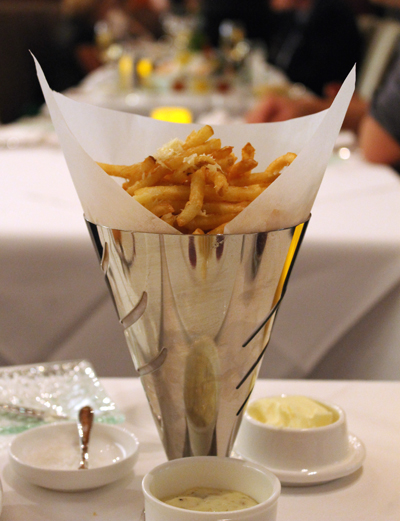 As a side, we couldn’t resist ordering the truffle fries dusted with parmesan. Dunk the skinny fries into the accompanying truffle aioli and just try to not eat every last one, though it’s a good bet that you will.

Desserts are by Pastry Chef Dan Huynh. Souffles ($20) take 15 minutes to bake, but they’re worth the time if you have it. The one offered that evening was a cloud-like chocolate. If you’re an avowed chocoholic, though, don’t expect a deep, dark chocolate bomb. Rather, this one is much more delicate in tasting with the chocolate playing second fiddle to the peppermint elements on the plate, namely two good-sized chocolate macarons filled with mint ice cream. They’re intensely minty so once you eat them, you don’t really taste the chocolate anymore. 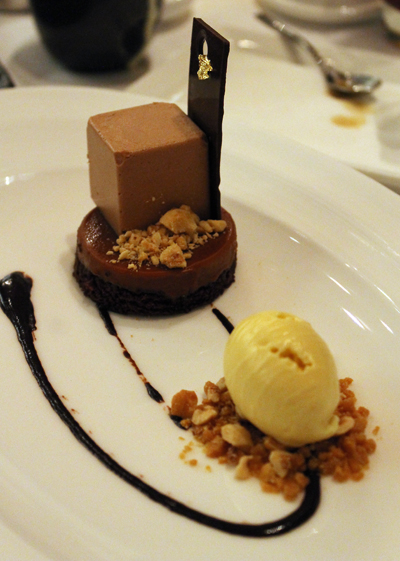 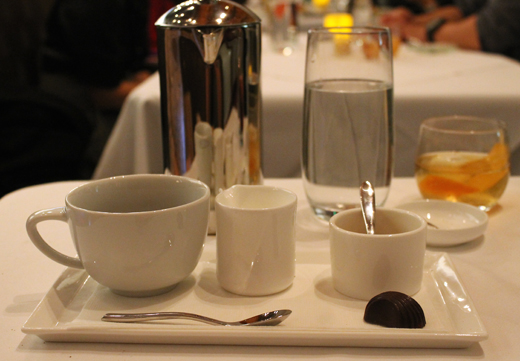 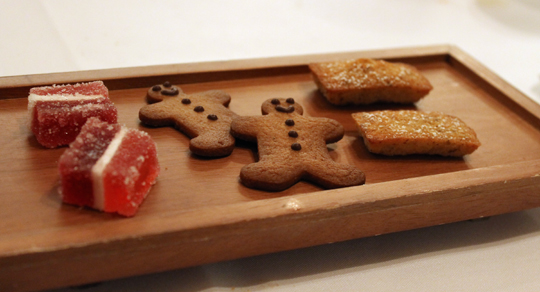 Pandora ($12) is an intriguing dessert composed of an airy chocolate mousse cube, hazelnut, praline and a scoop of caramelized miso ice cream. The miso is fairly faint tasting. If you didn’t know it was there, you might not detect it, save for a hint of savoriness on the finish. That characteristic, though, made the rich ice cream actually balance the sweet nuggets of toffee crumble on the plate. 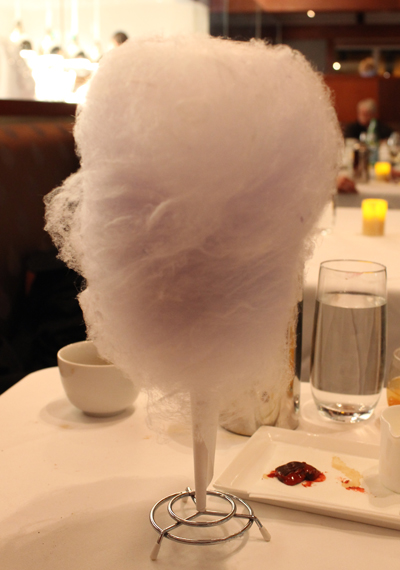 It’s been a tradition at Alexander’s and it continues here, along with the bar that has been set for fine-dining with flair and fun. 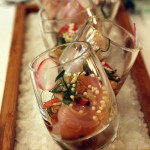 More: My Dinner at Alexander’s in San Francisco