William Werner of Craftsman and Wolves at his demo at SF Chefs.

Not all the action of SF Chefs was going on underneath the tent on Union Square in San Francisco.

One of my favorite parts of the three-day food-wine-cocktail extravaganza was “Industry Day,” when food professionals got to sit in on panel discussions and cooking demos featuring some of the Bay Area’s most talented chefs.

*William Werner of Craftsman and Wolves of San Francisco showed how he makes his best-selling “Rebel Within.” The savory cake studded with Boccalone sausage hides an oozy egg inside. But did you know that was an accident? Werner admitted he originally intended to put a hard-boiled egg inside, but took the pan out too early. Just goes to show the most successful creations often are “mistakes.” Werner’s famed “Rebel Within” is breakfast all in one. 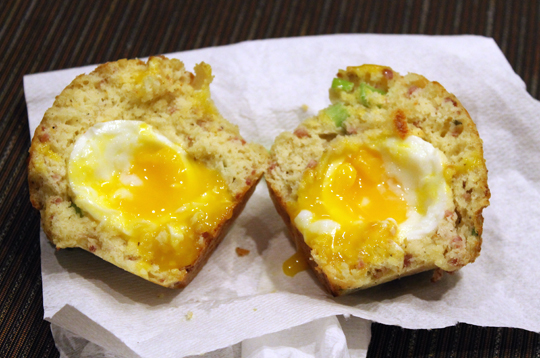 The lovely runny egg hidden inside.

*Evan Rich of Rich Table in San Francisco demonstrated his famed sardine chips. He is rather astounded how popular they’ve become. It’s the only item on the menu that has never been taken off. His kitchen turns out 600 of these crisp potato chips that have a whole sardine woven through. He’s around sardines so much, he joked, that he can’t even bring himself to order the fish if he sees it on someone else’s menu when he’s dining out.

*Dominique Crenn of Atelier Crenn of San Francisco put together a gorgeous dish called “Flavors of Brittany.” It reminds her of that part of France, which she visited often as a child. Only in her hands, it’s a technical marvel of bone marrow “gnocchi,” pork belly, plankton gel, sea grapes and tomato foam. It looks like a piece of art — not surprising from a chef who actually writes a poem with every menu she creates. 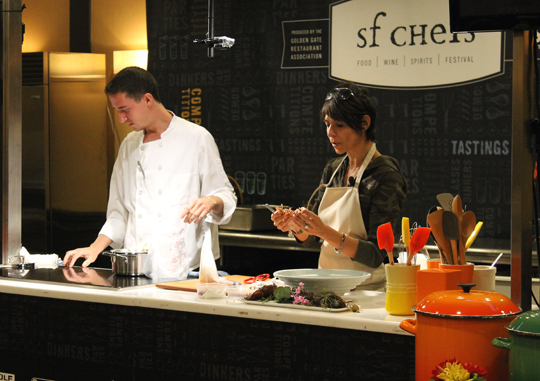 Dominique Crenn of Atelier Crenn putting together her imaginative dish. 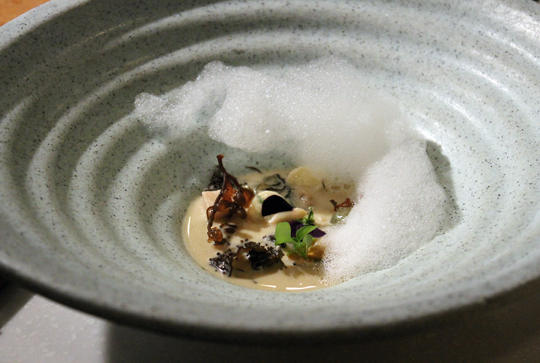 Crenn’s dish was inspired by the sea and seafood of Brittany.

*Brad Farmerie of Public in New York and The Thomas in Napa created a dramatic sashimi dish with the assistance of New Zealand Chef Al Brown of Depot restaurant. The king salmon they used is farm-raised in New Zealand. The Ora salmon has already been served at such Bay Area restaurants as Waterbar and Boulevard. They are raised in the waters off Marlborough Sound. 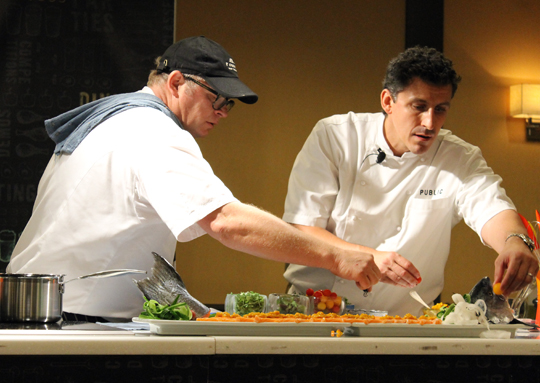 Chefs Al Brown and Brad Farmerie putting the garnishes on their dramatic plate. 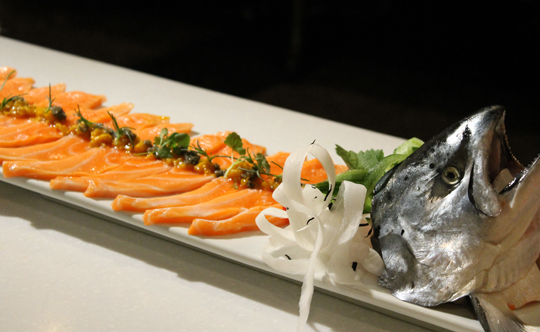 How’s that for a plate of fish?

*Friends and colleagues, chefs Daniel Patterson of Coi in San Francisco and Sean Brock of Husk and McCrady’s, both in South Carolina, teamed up for a demo that featured some eye-opening dishes, including Brock’s carrots roasted in hot sand, which intensified their sweet, earthy flavors in a most startling way. 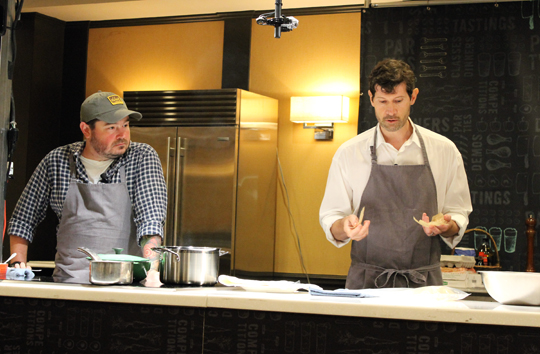 Chefs Sean Brock and Daniel Patterson discuss how water — how much of it or how little of it — affects the nature of cooking. 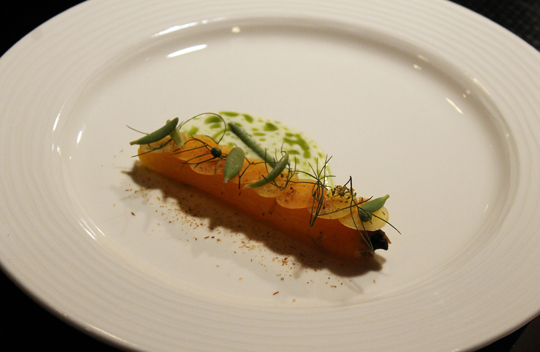 Such as in Brock’s dish, where the water content of a carrot is lessened from being cooked in hot sand, thereby concentrating its flavor.

Inspired, Patterson tried to do an impromptu version with a live spot prawn cooked in hot sand. After carefully removing the prawn and shelling it, he shared a morsel with Brock and declared, “It tastes like spot prawn — with a few grains of sand.” Laughing, he added, “OK, the comedy portion is done now.”

When you put a couple chefs of this caliber together, you just never know what’s going to happen. 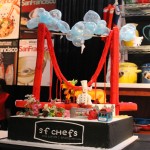