A Preview of Pabu in San Francisco The first course in the kaiseki Pabu preview dinner.

Pabu, the much-anticipated collaboration between chefs Michael Mina and Ken Tominaga, isn’t even expected to open until at least June of this year in San Francisco’s Financial District.

But last Wednesday, in an effort to build a little more buzz around the new project — as if it needs any more — Mina held a preview dinner at his Michael Mina restaurant in San Francisco, effectively turning over his flagship for one night to Tominaga to serve a kaiseki dinner showcasing dishes that will be on the menu at Pabu.

The dinner, $130 per person with optional $65 beverage pairing, sold out quickly. I was fortunate to be invited as a guest of the restaurant to experience the special menu.

This will be the second Pabu by Mina and Tominaga, chef-owner of the acclaimed Hana Japanese Restaurant in Rohnert Park, a favorite haunt of Bay Area chefs in need of a stellar sushi fix. 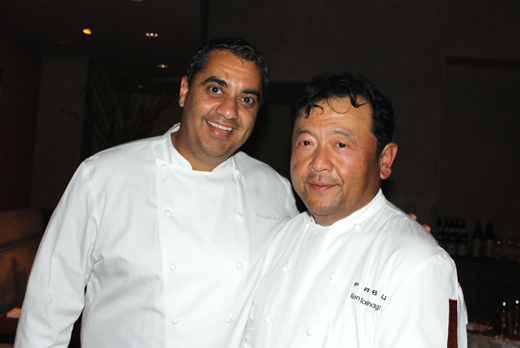 The first Pabu is in the Four Seasons Hotel Baltimore. Like that one, the Pabu that will open in the LEED-certified 101 California building will serve contemporary izakaya food, and feature a sushi bar and robata grill. Unlike the Baltimore locale, though, it will also include shabu shabu. What’s more, there will be a separate concept, Ramen Market, which not only will spotlight those brothy noodle bowls, but Japanese breakfast favorites. The glass atrium and outdoor spaces also will allow Mina and Tominaga to build a vegetable and herb garden to grow products for use in the restaurants.

The dinner began with zensai or hors d’oeuvre, a trifecta of small bites on one plate: fresh water eel with Japanese cucumber and pickles; Hawaiian ahi poke cut so fine as to take on a sublime smooth, paste-like texture; and an appropriately named “Happy Spoon” filled with oyster, tobiko, uni, salmon roe and ponzu creme fraiche. It was served with Tsujizenbei Junmai Daiginjo, a drier, less fruity daiginjo that is so favored by Tominago that he bought up all 100 bottles the Japanese brewery makes annually.

Next, the suimono or soup course, an extremely mild, light broth with one large shrimp-scallop dumpling in the center of the bowl. Maybe it’s because I’m of Chinese heritage and used to dumplings that are a little more toothsome in texture, but I found this one quite soft, bordering on mushy. Interestingly enough, it was served with Masumi Okuden Kantsukuri, a premium sake that had been warmed to 100 degrees. Hana Sake sommelier Stuart Morris was on hand to dispel the myth that all good sake should be served cold. Morris, a former sous chef at the now-shuttered Go Fish in St. Helena, is one of a handful of Americans to hold the title of KikiSakeShi, akin to a Master Sommelier of wine but of sake in this case. Indeed, he was right. Why serve a cold sake with a warm soup? The gentle heat actually brings out a fullness in the sake, revealing its earthy depth. 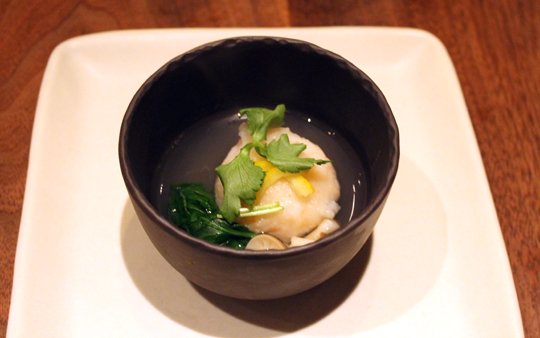 Mukouzuke is the chef’s selection of sashimi and what an assortment it was. It included mackerel that was rich and lush; and plump Bigeye tuna — all served on a bed of crushed ice with a dab of fresh wasabi.

Yakimono or the grilled preparation followed. Not just any grilled protein but the king of beef, top-grade “A-5” Miyazaki Wagyu beef. There were just a few small slices, but with beef this marbled, that’s all you need. Seared on the outside and rare inside, it was like beef butter. 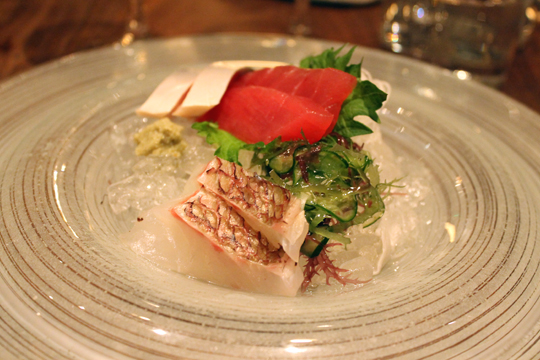 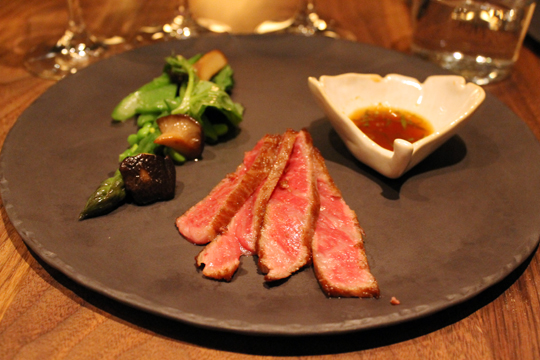 Next, an interesting interpretation of nabemono or “cooking pot.” What looked like a reinforced coffee filter was set atop a flame brought to your table. It held cellophane noodles, cubes of tofu and mushrooms. From an iron teapot, the server poured a clear broth into the basket, instructing you not to drink every last drop of it, lest you dry out the paper holder and set it on fire. So, gingerly, we took a few spoonfuls of the mild broth, afraid of dipping into it too much. Alongside was a plate of raw scallop, hamachi and snow crab leg with a dish of sesame ponzu sauce. You’re instructed to eat the seafood raw or to drag it ever so briefly through the hot broth to warm it gently. We managed to finish it all — without the need of a fire extinguisher coming to our rescue. 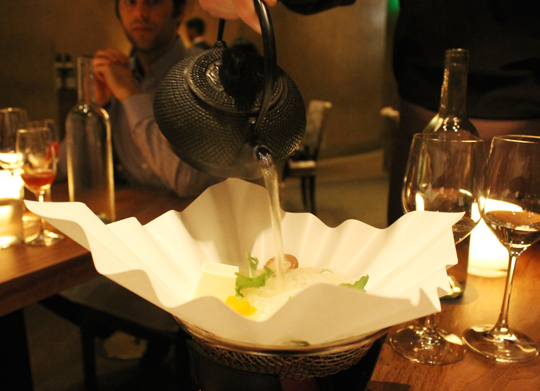 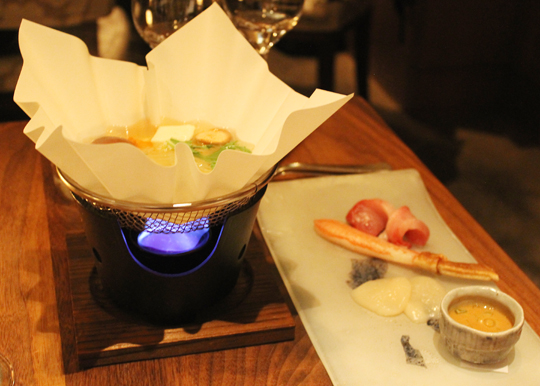 The complete makings for shabu shabu.

More raw fish followed in the gohan mono or traditional chirashi dish with octopus, snapper, salmon, pickled shiitakes and bluefin toro, all arranged precisely over seasoned rice that was cooked so perfectly that each grain remained distinct and separate rather than sticking to one another in one big mass. Yes, bluefin is endangered. But I ate it because it was there on the plate. And there’s no denying the appeal of the fattiest part of this prized tuna, which just melts in your mouth and lingers on the palate. A tiny yuzu posset cleansed the palate with the pudding’s bright tang. 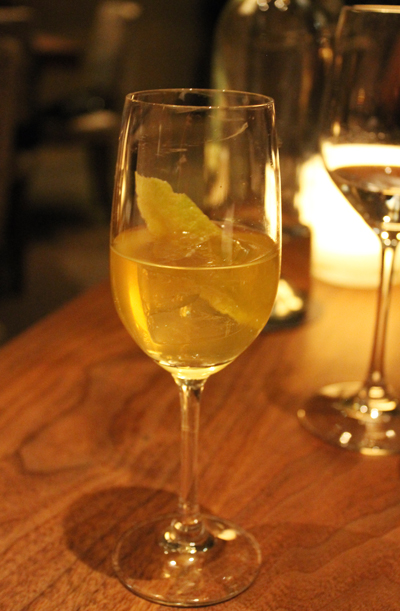 Words for us all to remember: “Patience Young Grasshopper.” Not your usual sundae.

Second, soy-glazed mochi on sticks with a cravable sweet-salty soy glaze, and slivers of mochi floating in a brown sugar syrup with powdered chestnut.

And third, a “Lemon Flower Sundae” made up of a sake foam, hibiscus gel and a foundation of matcha shortbread. Creamy and crunchy in tandem, it was just sweet enough.

Mina and Tominaga definitely succeeded with this dinner. If I wasn’t already looking forward to the opening of Pabu, I surely am now. 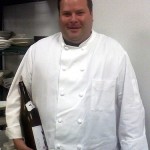