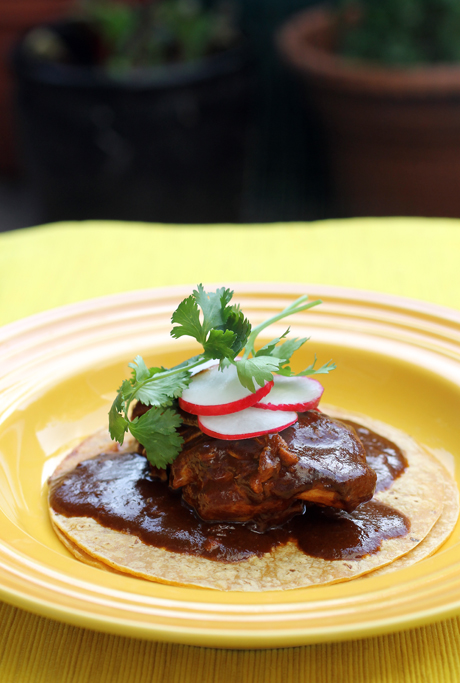 Tacolicious makes it easy to enjoy Mexican mole at home.

A cookbook debuting in September.

And a new line of sauces and salsas now selling exclusively at Williams-Sonoma.

San Francisco’s  Tacolicious is fast on its way to becoming its own mini empire. The restaurant was established by Owner Joe Hargrave in 2009, who is married to San Francisco magazine editor, Sara Deseran, who, not coincidentally, is the author of the upcoming cookbook, “Tacolicious” (Ten Speed Press).

I had a chance to try samples of the new line of salsas and cooking sauces. Proceeds from the sale of the products go to the Tacolicious School Project, which supports neighborhood public schools in San Francisco. 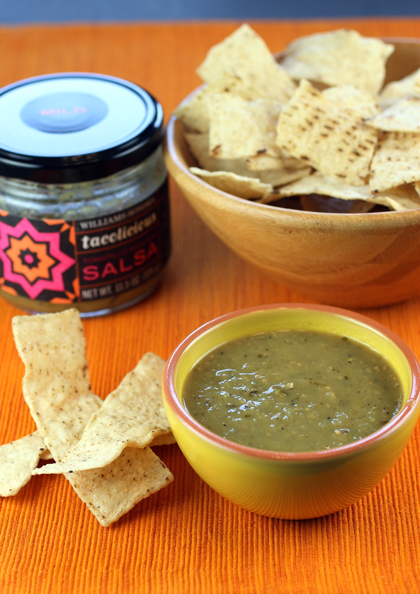 Break out the chips.

For instance, for the mole, the label instructed to add it to 3 pounds of seared boneless, skinless chicken thighs, then cook in a Dutch oven for 1 hour at 350 degrees. I did just that and was rewarded with an earthy, nutty, complex braise that I served over warmed corn tortillas. With a mix of Pasilla, Guajillo, Mulato and Chipotle chiles, as well as pumpkin seeds, toasted almonds, garlic, cinnamon and Mexican chocolate, it’s a sauce with a plenty of depth. The chocolate especially gives it a slight richness. Mole is one of the most laborious sauces to make, so a ready-made jar makes it all the easier to enjoy it more often and on the spur of the moment.

The Guajillo braising sauce sports a medium amount of spiciness from red chiles and a wonderful smokiness. A slight hoppy bitterness is evident from the bock beer. The label suggests using it on 3 pounds of boneless short ribs (I used boneless beef stew meat instead), then cooking it in a Dutch oven for two hours. The instructions also indicated to add a cup of water to the pan. However, you’ll probably need to add at  least 2 cups of water. With a longer cooking time, the sauce will cook down to almost nothing in the pot otherwise. 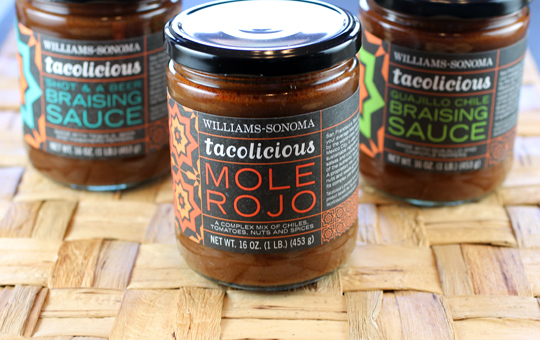 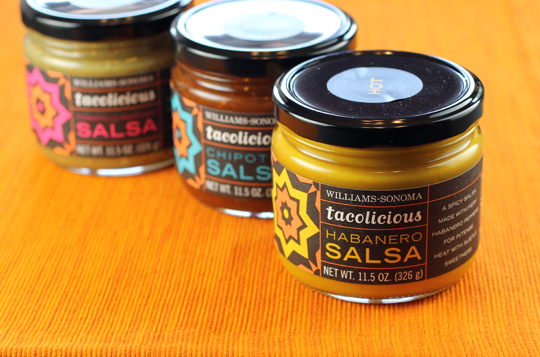 A trio of salsas from Tacolicious.

The mild avocado tomatillo one is really perky and tangy with just a tickle of gentle heat. The chipotle one is medium-hot with pronounced smokiness and meatiness from paprika and smoked peppers. The mustard-hued habanero is only for those who really like fire. My husband gingerly dipped the edge of a tortilla chip into it, chewed and declared, “OK, that is not enjoyable.” I did the same and came away forced to concede a one chip-maximum with that one. The Tacolicious folks, though, explain that the salsas are not necessarily meant to be eaten with chips that way, but instead drizzled into tacos or over grilled fish or meats.

If Tacolicious hasn’t yet conquered a neighborhood near you, its new line of salsas and sauces is one way to bring its bold flavors home.