Black Perigord truffles. The darker one has been peeled already, hence its more pronounced color.

They were destined to be the highlight of dinners, cooking demos and special restaurant offerings during last weekend’s Napa Truffle Festival.

And they all came from Italy.

For the past five years that this festival has been held, all the truffles used have been picked in Italy and flown in three days later to Napa.

But some day soon — possibly as early as this coming winter — black Perigord truffles may be harvested right here in Wine Country.

That’s because a burgeoning industry is taking root in Napa and Sonoma counties, as vintners and other property owners are gambling on growing truffles.

The American Truffle Company, which organizes the festival, has partnered with these interested folks to sell and plant filbert and oak trees that have been inoculated with the truffle fungus. Chef Ken Frank holding a plate of black truffle risotto with quail that was made in a demo by Chef Roberto Donna. Close-up of the risotto.

Once the trees are planted, it takes about five years for truffles to form. This winter, the trees of vintner Robert Sinskey, the first local client that signed on with the American Truffle Company, will be reaching that mark. His may become the first Perigords to be harvested in Sonoma County. Already this year, teams of truffle-hunting dogs have shown a much greater interest in his 1 1/2-acre orchard than ever before, Sinskey says, indicating truffles may indeed be forming under his trees.

Festival-goers had a chance to see Sinskey’s orchard for themselves, as part of a demonstration to show how truffle-trained dogs go about their work. I was fortunate to be a guest at the festival, my first time to the event. A truffle dog set to go to work, complete with a GoPro camera. 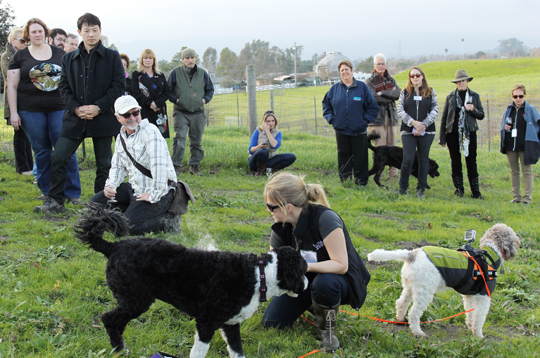 As Alana McGee, founder of Toil & Truffle Dog Company, explained, any dog can be trained to ferret out truffles, which grow underground. Although, pigs were used historically in Italy and France to do the job, dogs are the preferred choice now. That’s because most families already have dogs, which are also easier to control than pigs. Plus, if you’re spotted going for a walk with your pig in Europe, it’s a dead giveaway as to what you’re actually doing. With a dog by your side instead, it’s much more innocent looking. 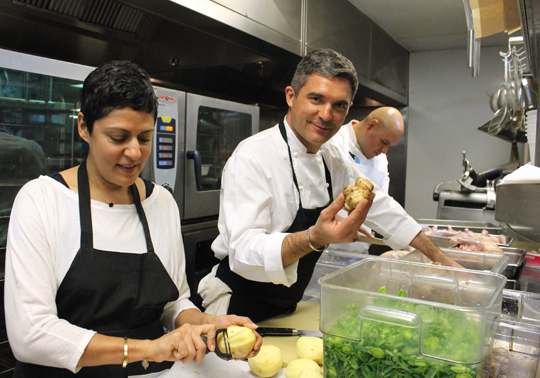 Chef Tony Esnault (center) holds up a sunchoke for his soup to be served at Peju Winery.

Chef Roberta Donna of Al Dente Ristorante in Washington, DC was one of the guest chefs cooking at the festival. Born in the Piedmont region of Italy, famed for the even more exorbitant and rare white truffle, Donna remembers just how fiercely competitive truffle hunting can be. It was only done at night, he said, so that nobody could spot your secret location, especially because truffles will grow back in the same spot year after year.

“If I see you go to some place in the forest at 7 p.m. on Jan. 23 to pick truffles, I could write that down and go to that same spot next year on that same day but four hours earlier,” he says. “I remember growing up and you’d go to bars at night and see all these guys drinking and playing cards. Then, all of a sudden at 10 p.m., they would say, ‘Oh, I have to go see my wife.’ They’d leave, then they’d come back an hour later to keep playing cards. You knew what they were doing. They were not going to see their wives.” 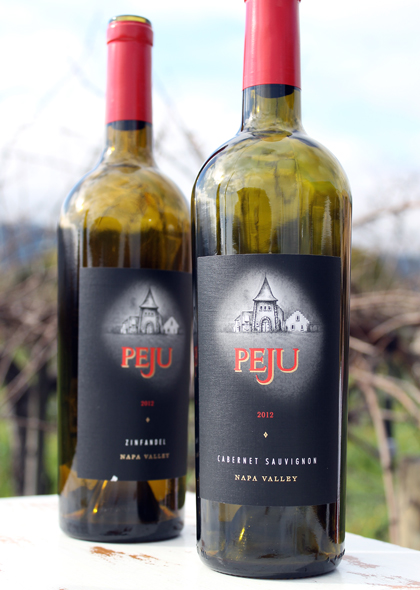 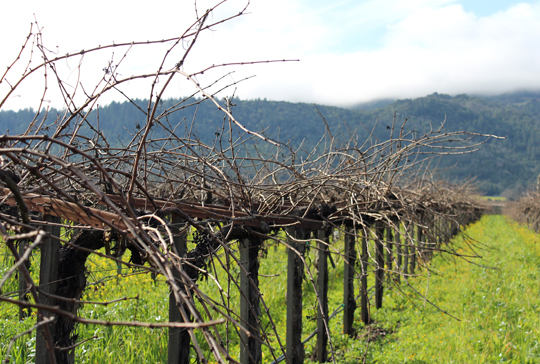 Even though he is excited that Napa and Sonoma are trying to grow truffles, like a loyal Italian, he is skeptical that they will ever be on par with what is produced in his native country.

“We will still have the best in Italy,” he says. “I just think so.” 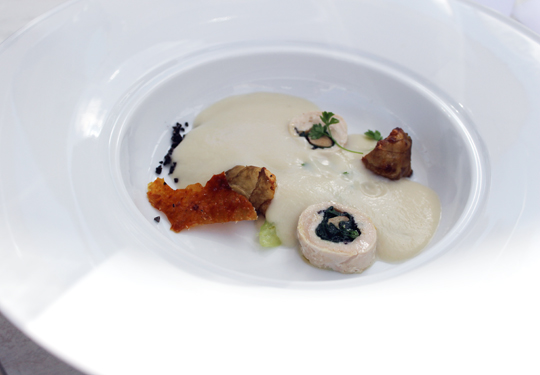 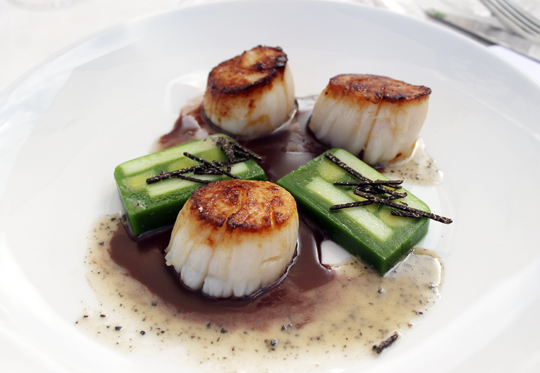 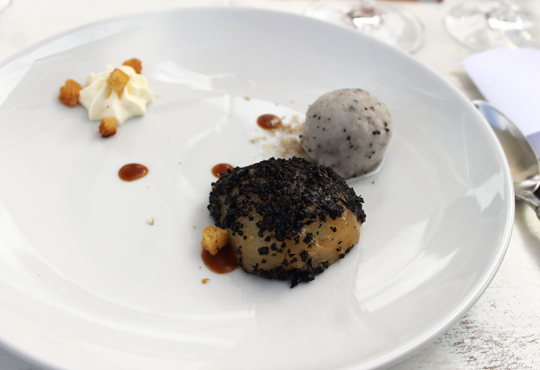 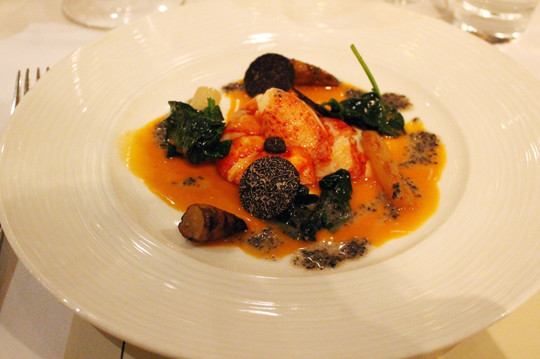 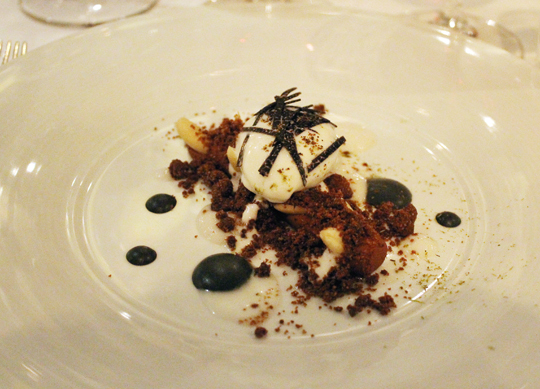 They worked alongside La Toque’s Frank, creating lunches at Peju and St. Supery wineries, as well as a lavish five-course dinner at La Toque. Every course at those meals — including desserts — featured a copious amount of heady black truffles. 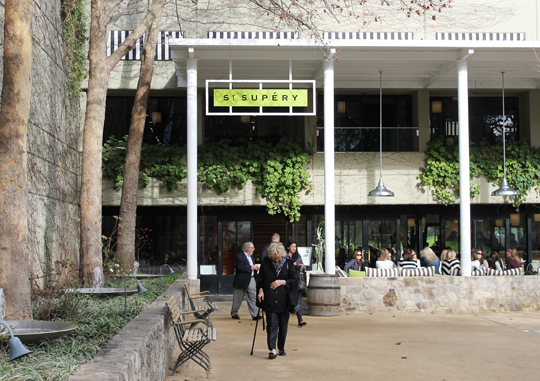 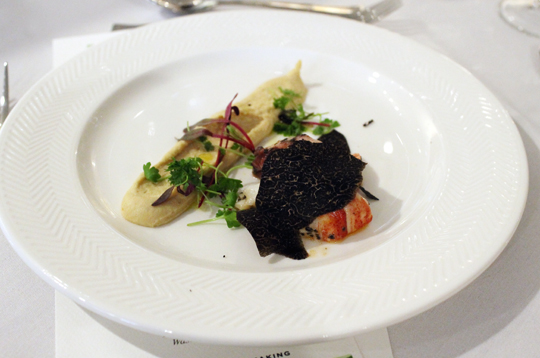 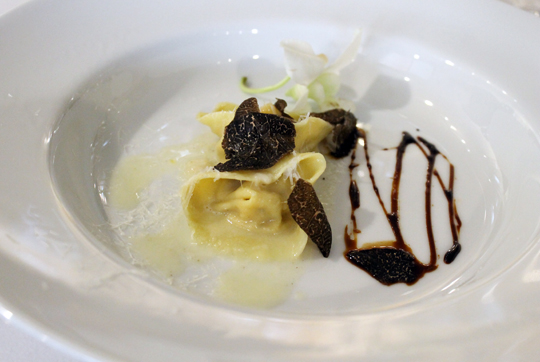 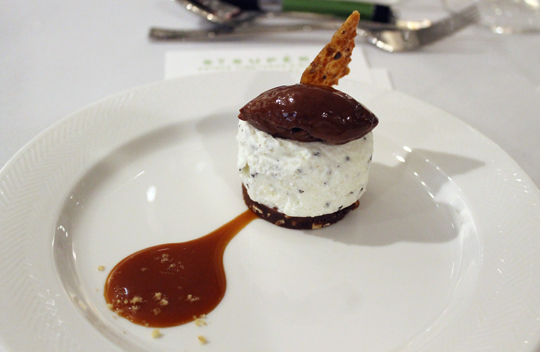 So much so, that it almost feels like withdrawal to go back to eating normally now. 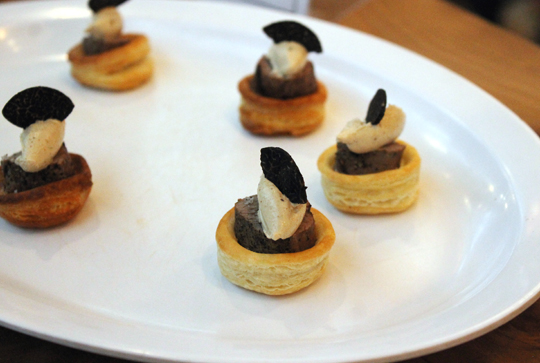 For more on how Napa and Sonoma are trying to grow truffles, see my story in the San Francisco Chronicle.