Bone marrow from the wood-fired oven at Arcadia.

San Jose’s tallest hotel, the downtown Marriott, is starting the new year with a real bang.

The 13-year-old hotel that boasts 26 floors just completed a massive $10 million-plus renovation, remodeling guest rooms and conference areas, installing routers in every room for high speed Internet access (yes, you can even stream Netflix now), adding food and beverage service in the lobby, and mobile check-in.

OK, Yu might not be brand new (he started 10 months ago), but with the completion of all the construction, the hotel’s Arcadia restaurant is finally ready to really show off its chef de cuisine. 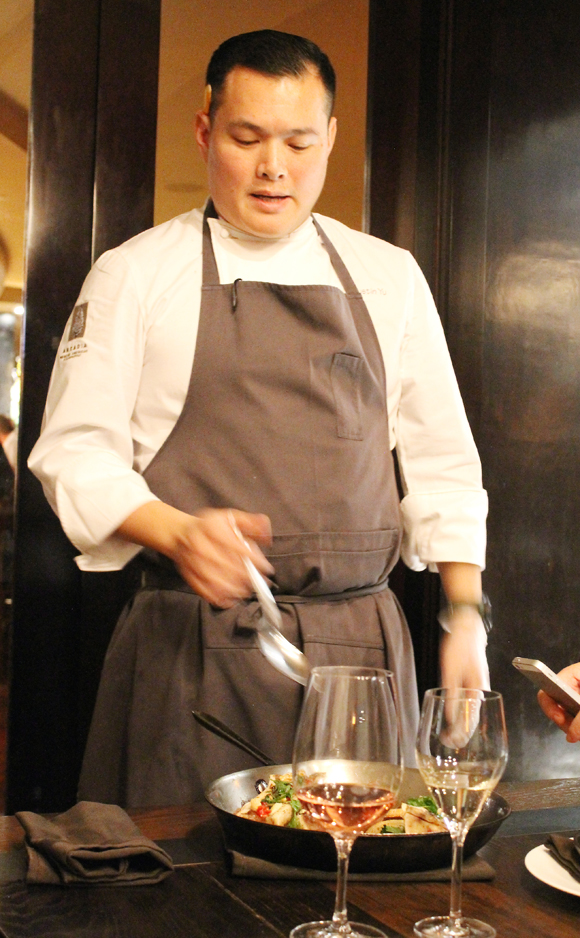 Arcadia, a Michael Mina restaurant, has always floated a little under the radar. But with Yu, it has someone who really has the energy and skills to take the reins full throttle.

Although the restaurant is inside of a hotel connected to the San Jose Convention Center, only about 25 percent of the diners are actually hotel guests. The rest are locals, dining either for business or pleasure.

I had a chance a couple weeks ago to try Yu’s food at this modern steakhouse when I was invited to a media dinner served in the private wine room.

Arcadia has begun beefing up its cocktail program, most notably with 21-day, barrel-aged cocktails, including a lovely White Manhattan made with white bourbon. 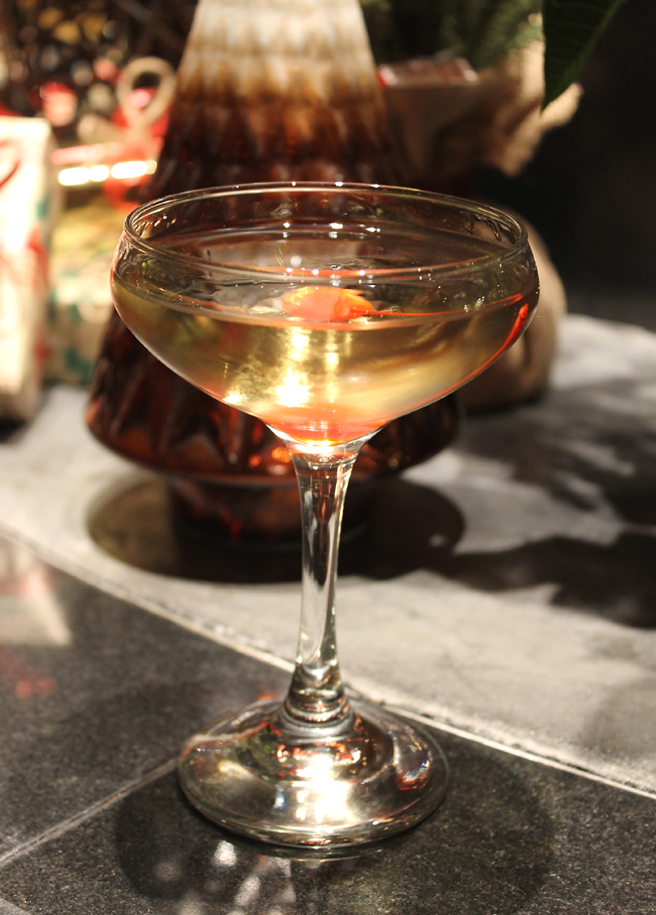 The evening started as it always does at any Michael Mina restaurant — with the temptation of golden duck-fat french fries with dipping sauces.

Then, came an amuse of cured steelhead trout with ricotta, and freshly grated zest from a Kaffir lime sourced from Yu’s own tree in his Milpitas backyard. Next came platters of oysters on the half shell ($18) with Bombay Sapphire cocktail sauce, and a brimming shellfish platter ($48) of cracked crab, Alaskan crab legs, jumbo shrimp, and more oysters.

And one can never pass up the signature ahi tartare, that’s been a mainstay at Mina restaurants for years. Full of texture and flavor, the tuna is mixed table-side with finely diced Asian pear, mint, chile and sesame oil. Chestnut soup was poured table-side. And it was a stunner. Thick, luxurious, and oh-so velvety, it was toasty with the gentle sweetness of the chestnuts. Mushrooms, salsify and a bit of indulgent foie gras garnished the deep bowl. This is the soup you wish you could have every Christmas.

A plump, seared scallop was dressed with brown butter made all the new with a dash of curry and crab butter. Persimmons — again from Yu’s plentiful backyard — added fruitiness without too much sweetness. 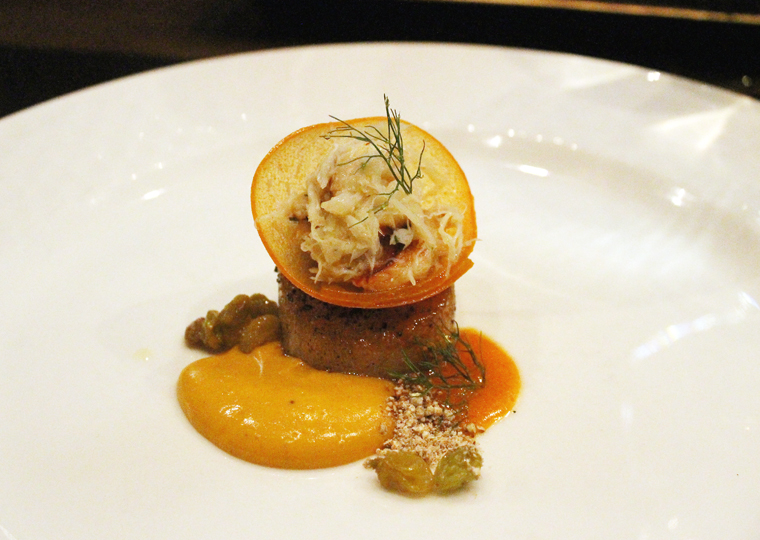 Caramelized scallop with Yu’s own persimmons. A taste of rib eye.

Yu came to the table with a sizzling cast-iron pan of bone marrow ($12), just pulled from the wood-fired oven. House-made giardiniera was spooned over. I just with there had been a little more of the pickled Italian veggies, as they were so delicious and such a nice foil to the unctuous richness of the marrow and the crostini on the bottom that had soaked up all that fatty goodness.

The 18-ounce Black Angus bone-in rib eye ($52) is the restaurant’s top seller. Yu gave us a taste of that with slices of rib eye attractively arranged with onions three ways: confit, pickled and in soubise, a creamy bechamel sauce. Juicy, and loaded with that unmistakable beefy minerality, it’s a carnivore’s delight.

In a nice gesture, cups of hot brown rice-barley tea were delivered with snappy gingersnaps because as Yu explains, “In his house, each meal finishes with tea.” Hot tea to cleanse the palate.

That may have seen austere, but what came next was definitely not — a huge individual platter for each person, filled with three scoops of ice cream and three small wedges of dessert.

There was creme fraiche ice cream to go with a light, bright tasting carrot cake (such a treat compared to so many carrot cakes with dense, gummy textures); olive oil gelato with sea salt (my favorite) to pair with pumpkin tart; and Nutella ice cream to enjoy with a decadent caramel-chocolate, layered candy bar-like cake. 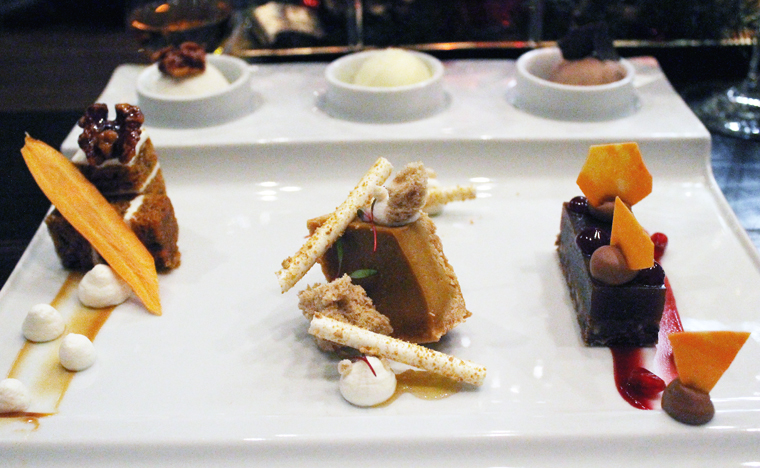 Yes, this is one serving.

The word, “Arcadia,” means “a place of simple pleasure and quiet.” This bustling steakhouse isn’t exactly a hushed environment. But it definitely provides plenty of pleasures.