One of Amanda Freitag’s favorite dishes growing up — her father’s beef stew.

In the winter, there are few things as comforting as tucking into a big bowl of beef stew and creamy mashed potatoes.

It’s a stick-to-your-ribs — and everywhere else — kind of dish that fortifies on a long, dark night like nothing else.

So when I spied “Pop’s Beer-Braised Bold Beef Stew,” I was game to give it a go, not only because of the two bottles of dark beer in it, but also the half bottle of red wine. How good does that sound, right?

The recipe is from “The Chef Next Door: A Pro Chef’s Recipes For Fun, Fearless Home Cooking” (William Morrow) by Amanda Freitag with writer Carrie King. You probably know celebrated New York Chef Freitag from her many TV appearances as a judge on the Food Network’s “Chopped” and a competitor on “Iron Chef America.”

As the name implies, this cookbook is not composed of complicated restaurant dishes, but recipes really meant to be made and enjoyed at home. Think “Cornmeal-Crusted Chicken Thighs with Jamaican Spice” and “Lamb Burgers with Fresh Mint Yogurt.” There are a few recipes with more unusual combos, such as “Crispy Spaetzle with Roasted Sunchokes,” to add more interest.

This stew simmers on the stove-top for hours until the beef becomes incredibly tender. At first, I was taken aback by the amount of beer, wine, and stock called for. The recipe says when you add the stock, it should cover the beef cubes. But my beef seemed more to be drowning in it.

Even after cooking for the allotted time, the sauce was thin and there was just too much of it. As a result, the stew may have been called “bold beef stew,” but it tasted rather bland in the end.

Still, I think this is a promising stew, and what I would do to change it is cut back on the amount of stock. In the original recipe, it calls for four cups. I rewrote the recipe to cut it back to 2 cups. You might even decrease it more than just so the liquid barely covers the top of the meat. I think this will result in a more concentrated braising liquid, and thus, a tastier stew overall.

What I didn’t change in any way was the “Smashed Yukon Gold Potatoes.” This tastes like a heavenly baked potato with sour cream and onions, but in a rustic mashed form. There’s no butter in it at all, but it tastes creamy and rich. You can use sour cream or Greek yogurt. I opted for the latter, which provided a nice tang. Do yourself a favor and go for the full-fat yogurt, too. It’s simply more flavorful and with a more luxurious texture, which you want in these potatoes.

These potatoes go with so many other things, too, including pork chops, roast chicken, and grilled salmon. Even after stew season is over, these potatoes will continue to find a happy place on your plate.

In a medium bowl, combine flour, 1/4 teaspoon of the salt, and 1/2 teaspoon of the pepper and use a fork to mix well. Add the beef cubes and coat evenly with the seasoned flour. Transfer to a mesh strainer and shake off any excess flour.

Place a Dutch oven or a large heavy-bottom pot over medium-high heat and add the butter. As soon as the butter melts and starts to foam, add the beef cubes in batches, in one even layer. Really let the beef brown on one side — 3 to 4 minutes — then turn the meat with tongs and brown it well on the other sides.

Transfer the beef to a plate, leaving the butter and the flour solids in the pan. Continue browning the rest of the beef.

Add the onions and diced carrots to the pot and saute over medium heat until they begin to caramelize, about 5 minutes.

Return the browned beef cubes to the liquid and cover with the stock. Bring to a simmer, then turn down the heat to low and season with the remaining 1/2 teaspoon pepper. Cover and cook on low heat until the meat is fork-tender, about 2 hours, stirring occasionally to prevent it from scorching on the bottom.

Add the baby carrots and cover. Cook for another 30 minutes, or until they’re tender. Taste and adjust the seasoning or add a bit more water if it has become too thick.

Place the potatoes in a large stockpot and add enough water to cover and the 2 tablespoons salt. Bring the water to a boil over high heat and cook the potatoes until fork-tender, about 25 minutes. Drain the potatoes.

Return the potatoes to the still-warm pot and add the stock. Using the back of a wooden or metal spoon, roughly smash the potatoes to expose the flesh. Add the scallions and season the potatoes with the remaining 1/4 teaspoon salt and pepper to taste. Add the sour cream or Greek yogurt and stir to incorporate it completely.

Transfer the potatoes to a serving dish and crack some additional pepper over the top before serving.

Adapted from “The Chef Next Door” by Amanda Freitag 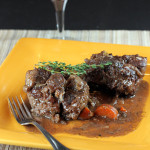 And: Braised Oxtail Stew From Spain 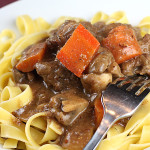 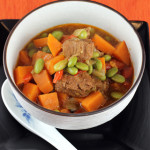 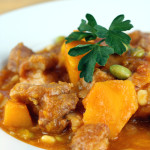