Foodie Gifts — For Friends, Family or Yourself True, it’s easy enough to whisk together your own salad dressing at home if you have a good variety of oils, vinegars and seasonings.

But Farmhouse Lab of Marin does it one better by packaging its consciously-sourced dressings in cute little mason jars that make the perfect host or hostess gift.

The dressings use raw honey or raw coconut nectar for sweetness, as well as vinegars and oils, and mustards from artisan producers for flavor.

The Sunny Avocado is buttery with a slight vegetative note to it, as well as the zing of apple cider vinegar. The Berry Olive is fruity sweet-tart with pomegranate vinegar and raw blackberry honey. The Green Pumpkin is nutty and rich with a dash of mustard. The Red Sunflower is also quite nutty with a subtle spiciness from red pepper chili. They come in a handy four-pack. (photo by Carolyn Jung)

A four-pack (one of each variety) is $67.99. You can give the entire pack to someone or break it up and gift one or two to someone while keeping the rest for yourself. Best yet, through the end of this year, 10 percent of proceeds from each four-pack to SF Fights Fire, a grass-roots chefs effort to provide food and services to North Bay Fire Rescue Centers in the aftermath of the Wine Country fires. Just enter the code at check-out: Enter Code: SFFF.

I will go on record as saying that it’s a good bet that I will likely never cook anything from the new “Moto: the Cookbook” (Little, Brown and Company, $50) by Homaro Cantu. Yet when a review copy arrived in my mail, I couldn’t stop reading it or stop staring at the photos of its phantasmagorical dishes or being in awe at the mind that came up with it all. 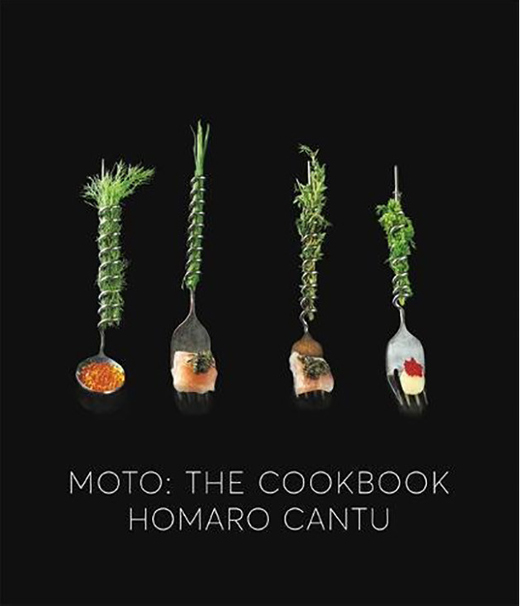 Cantu, a former sous chef at Charlie Trotter’s, was the visionary behind the ground-breaking Moto in Chicago, which opened in 2004. Sadly, he took his own life in 2015. The restaurant continued on without him for almost a year before his widow sold it to the Alinea Group.

But not before it made an indelible mark on the food industry.

No doubt, even if like me you never had the pleasure of experiencing the restaurant, you heard about its molecular gastronomic feats. Menus printed on edible paper that — yes — guests were encouraged to eat. A dessert of “spaghetti” made from liquid nitrogen-frozen white truffle ice cream extruded from a garlic press, then garnished with grated white chocolate to mimic Parmesan. A Cuban pork sandwich made to resemble a Cuban cigar that’s served in a real ashtray. And Birthday Cake with Ice Cream, in which a real birthday cake is baked, then dehydrated to turn into flour to make a new birthday cake.

You will be scratching your head at the audacity of these dishes while being in complete awe of the man, the daring do of his team, and his unfettered imagination.

A great gift for those who not only appreciate forward-thinking, chef-driven food, but the intricacies and skills behind it.

Spirit Works Distillery is the only producer of Sloe Gin in the United States.

Husband and wife Timo and Ashby Marshall make this unusual liqueur by steeping sloe berries — a tiny relative of the plum — in their signature gin until it takes on a festive deep ruby color.

I had a chance to try a sample, my first time tasting this liqueur, which originated in the United Kingdom, where rural families would traditionally gather the wild berries to macerate. The beautiful and delicious Sloe Gin. (photo by Carolyn Jung)

I like gin to begin with. But if you are usually put off by the heady botanical flavor, Sloe Gin will surprise you with its greater fruit-forwardness. It is full of raspberry-cherry-plum flavors, as well as orange notes and just a smidge of anise. It’s ever so sweet but balanced with enough acidity.

With its lovely color, it’s especially made for serving at this time of year in all manner of cocktails, even in as something as simple as Sloe Gin mixed with fizzy water or sparkling wine.

Traditionally, it is served straight in small glasses as a digestif after a meal. And that’s really the best way to appreciate its nuanced flavor.

The Sloe Gin is 27 percent alcohol. A 750ml bottle is $47. Purchase it at Spirit Works tasting room in Sebastopol or at select online retailers.

Buy a bottle for yourself to share with friends and family at your holiday cocktail or dinner parties. Or give one to your favorite spirits aficionado.

Feast of the Seven Cultures

The new Acacia House at Las Alcobas resort in St. Helena is hosting Feast of the Seven Cultures, Dec. 18 through Dec. 24, which it hopes to make an annual holiday event.

Head Chef Chris Cosentino has invited six guest chefs for this series of seven special dinners (he’ll be cooking the seventh one). Each one-night-only tasting menu will be based on a different country to spotlight the seven wine regions that the restaurant takes inspiration from. Chef Chris Cosentino in the kitchen at Acacia House. (photo by Carolyn Jung)

The line-up is as follows:

The dinners are $190 per person, with optional beverage pairing of $95. A portion of proceeds from the dinners will go to the Napa Valley Disaster Relief Fund.

Tickets to the dinners are available via Tock.

Makes for a delicious way to treat yourself. Or your parents, siblings or besties.

After 30 years, Team USA emerged triumphant this year, capturing the country’s first gold trophy in the Olympics of the culinary world, the Bocuse d’Or.

But what really laid the foundation for that was the 2015 finish in which Team USA made it to the podium for the very first time, receiving silver.

“Chasing Bocuse: Amercia’s Journey to the Culinary Stage” (Prestel, $49.95) is by Chef Philip Tessier, who led that 2015 second-place finish with teammate Commis Skylar Stover. Tessier was also the coach for Chef Mathew Peters and Commis Harrison Turone, the team that succeeded his and garnered gold. 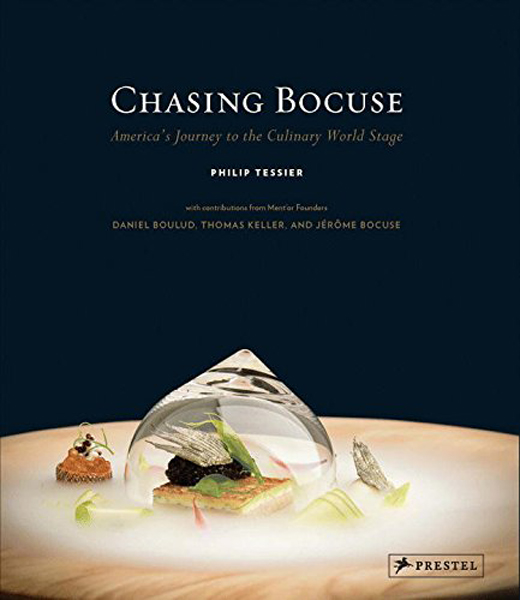 This gorgeous coffee-table book takes you through paces of this legendary competition in which teams have less than six hours to complete two extremely elaborate food presentations before a live audience. Tessier offers up just what a mental and physical challenge it can be.

The book includes contributions from chefs Thomas Keller and Daniel Boulud, who were instrumental in mounting increasingly stronger and better trained teams, which led to the United State’s rapid ascent in the past few years.

Forget the likes of “Cutthroat Kitchen” or “Cupcake Wars.” This is what really competition at the highest levels looks like.

A book for anyone who appreciates the art of perfection in cooking.