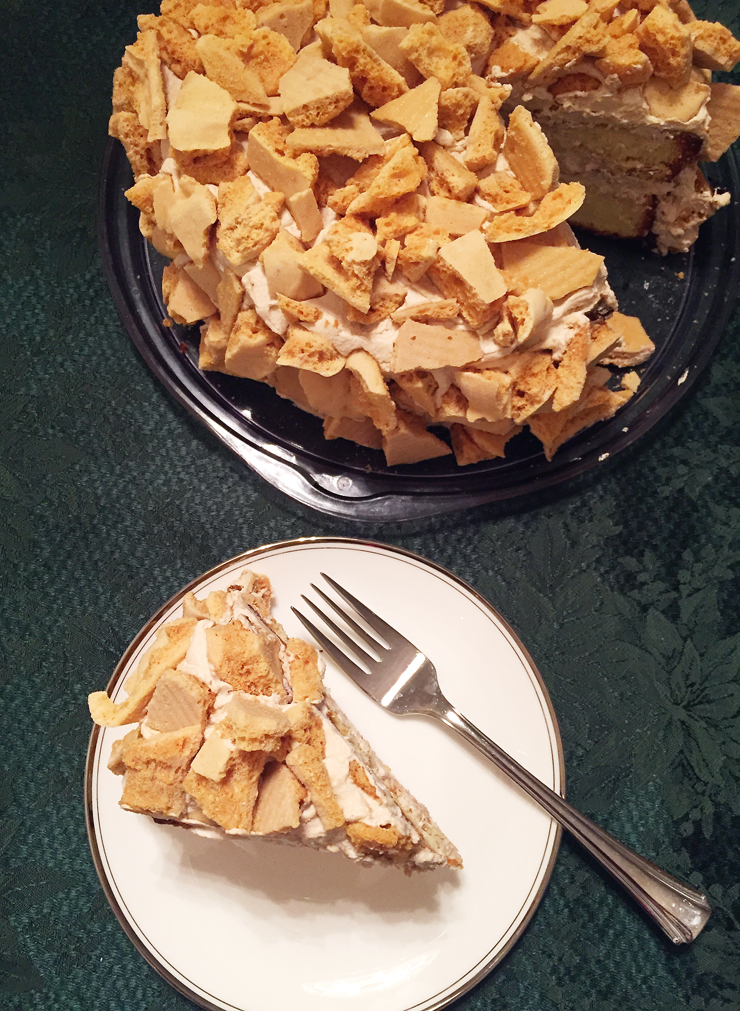 Blum’s is no more, unfortunately. But my Dad was thrilled to discover years ago that Yasukochi’s Sweet Stop in San Francisco’s Japantown baked a similar cake. He’d buy it now and again to surprise us with.

On a trip to Southern California, I was even more ecstatic to discover the version by Valerie Confections in Los Angeles.

You will tell yourself you can’t possibly eat such a big slice. But you will devour it.

This may be heresy, but I think it’s even better than the original Blum’s one. That’s because the toffee is slightly different. While the Blum’s cake was covered with small flat, hard sugary shards, Valerie’s is shrouded in big, airy, thick, crunchy honeycomb toffee. What’s more, this honeycomb toffee holds up better, so that if you have leftover cake the next day, it’s nearly as good as the first day.

I know, because I made the cake.

Yes, I made Valerie’s version of it, using her recipe.

The cake may look fancy and intimidating, but it’s really not that taxing. You can make the coffee crunch toffee the day before, and store it in a sealed container and hit will hold its crispness. The toffee is essentially a caramel flavored with brewed coffee to which you add baking soda at the last second. That’s when things get really exciting. It will foam up and double in volume. So, you have to work quickly to dump it out into a greased pan. Once completely cooled, you break it up into shards for the cake. You may end up with some leftover coffee crunch. Eat it by the handful like candy or sprinkle it on ice cream if you like. 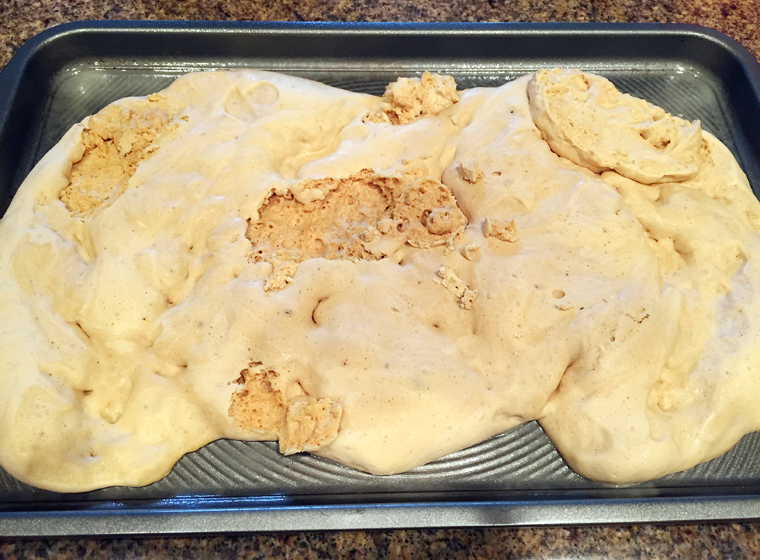 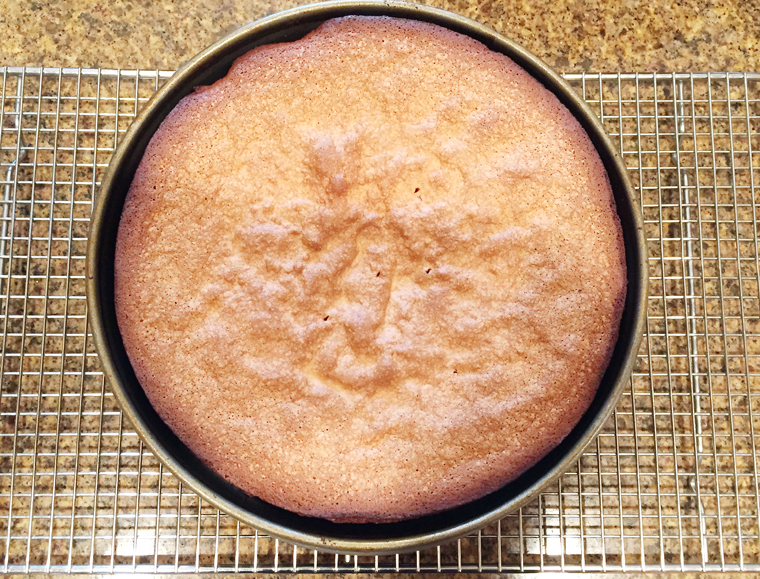 The chiffon cake out of the oven.

The chiffon cake batter must be baked in a springform-like cake pan. I’ve seen people write online that they have used a regular cake pan, filling it to the brim. But just be warned that the batter will rise even to the top of the taller springform pan as it bakes, before settling down, so you want to use a pan with depth or else you risk spillover.

I found that the bottom of my cake browned more than I like, while the top was fine. The next time I make this cake, I will line the springform pan with a greased circle of parchment paper to add a little more protection. I adapted the original recipe to include that recommendation.

The cake is airy and light — a perfect match for the heavenly coffee whipped cream it’s covered with.

You apply the honeycomb toffee pieces all over the cake right before serving. That way they stay as crisp as they can. I baked the cake and frosted it, and transported it to my in-laws house for Christmas, toting the toffee in a separate container.

When it was all garnished, and brought to the table, it was a true sight to behold. It’s so unusual looking with its big, bold, craggy toffee armor, that it’s quite unforgettable.

None of my in-laws, who grew up in Sacramento, were familiar with the lore and love of this cake. But after one slice they were smitten.

You will be, too. It’s a taste memory that can’t help but live on oh-so sweetly. 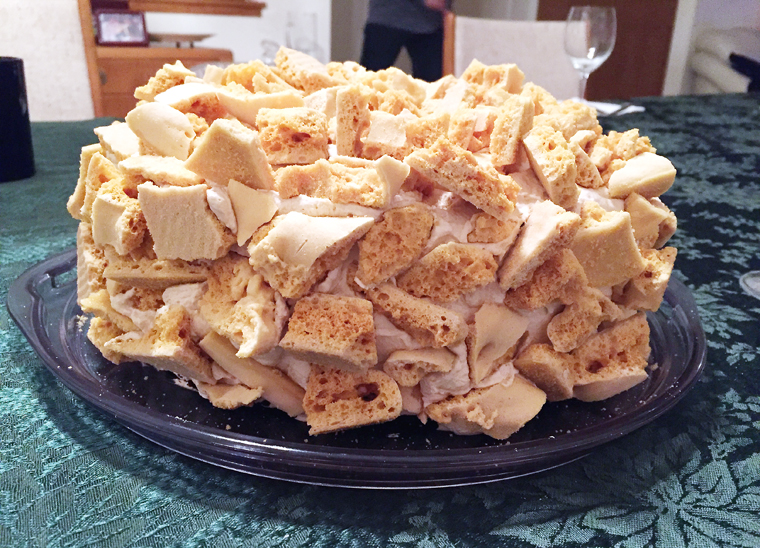 One of the best cakes you’ll ever enjoy. 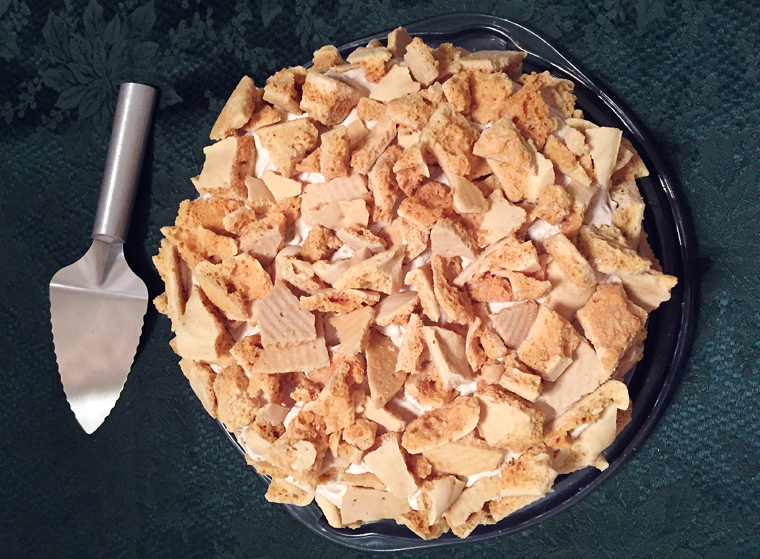 Sift together the flour, 3/4 cup of the sugar, and the salt into a medium bowl.

In the bowl of a stand mixer fitted with the whisk attachment (or in a large bowl, using a handheld mixer), whip the yolks and 1/4 cup sugar on medium speed until thick and pale yellow, about 4 minutes. Gradually add the water, oil, and vanilla, mixing well. If using a stand mixer, transfer the mixture to a large bowl and wash and dry the mixer bowl and whisk (or wash the beaters).

Using a rubber spatula, fold the yolk mixture into the egg whites. Gradually fold in the dry ingredients, approximately 1 cup at a time, until fully incorporated.

Pour the batter into the prepared cake pan and smooth the top with a spatula. Bake the cake for 55 minutes to 1 hour, until it is golden brown and a toothpick inserted in the center comes out clean.

Let the cake cool completely on a cooling rack, about 45 minutes (removing the cake when it is still warm will cause it to deflate and likely tear).

To Make the Coffee Crunch: Attach a candy thermometer to the side of a 4- to 6-quart heavy pot. Add the sugar, coffee, and corn syrup to the pot and cook over medium-high heat, stirring occasionally with a heatproof silicone spatula until the mixture reaches 270°F, about 10 minutes.

Meanwhile, heavily coat a 13-by-18-by-1-inch baking sheet with nonstick baking spray. Measure the baking soda into a ramekin or cup and place near the stovetop, along with a large whisk.

Using a cleaver or other heavy knife, chop the crunch into quarter-sized pieces. (The crunch can be made ahead and stored in an airtight container at room temperature for up to 2 weeks.)

To Make the Coffee Whipped Cream: Combine the heavy cream, sugar, vanilla, and coffee in a large bowl and whip with a handheld mixer until medium peaks form.

To Assemble: Place the cake on a turntable or cake stand and, using a long serrated knife, slice the cake horizontally in half. Remove the top half and place cut side up on a plate. Cover both halves with whipped cream, using approximately 1/2 cup per side. Scatter 1 cup of the crunch evenly to cover the bottom half. Place the top half, cream side down, on the top of the crunch layer and press gently to even the layers. Frost the sides and top of the cake with the remaining whipped cream. Refrigerate until ready to serve.

When you are ready to serve the cake, cover the sides and top with the remaining crunch (if you apply the crunch in advance, it will start to melt and lose its bite).

This cake is best enjoyed the day it is assembled. Store it in a cake box or under a cake dome in the refrigerator. 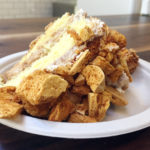 More: A Visit to Valerie Confections