Sunset Dining At The Claremont’s Limewood A perfect dish of wild salmon at Limewood. (Photo by Carolyn Jung)

With so many independent restaurants to choose from in the East Bay, why drive to one in the Oakland hills in a fancy hotel?

Because at sunset the view is killer.

And it’s a chance to experience history.

Limewood Bar & Restaurant is located inside the majestic Claremont Club & Spa, a 103-year-old historic landmark spanning 22 acres of greenery on the Oakland-Berkeley border.

You can’t miss the sprawling, castle-like structure when you glance toward the hills. It’s as imposing as it is impressive.

Even if you’re not splurging on a night’s stay at the luxury hotel, you can still enjoy a meal at the restaurant with its open kitchen, clubby atmosphere and bank of large windows.

The historic Claremont Club & Spa. (Photo courtesy of the Claremont)

A few weeks ago, while on business in the East Bay, I dined solo here, paying my own tab at the end, though, the chef brought out an extra dish for me to try.

Sit back with a Basil Smash ($16), a refreshing blend of Hangar One vodka, Saint Germain, basil, fresh blackberries, and lime that was like a sip of the garden. Basil and berries make up this lovely cocktail. (Photo by Carolyn Jung)

Hamachi Crudo ($17) had an influence of Southeast Asia with its nuoc cham that added a vibrant salinity to the yuzu aioli accenting the slices of raw fish. A touch of crunch was provided by puffed wild rice.

Beet salads may be a dime a dozen these days, but the Roasted & Marinated Baby Beet Salad ($15) with whipped goat cheese got a nice jolt of muskiness from truffle vinaigrette. Puffed quinoa took the place of croutons. Instead of the sweetness of the beets taking over everything, there was a nice pronounced earthiness at the forefront. 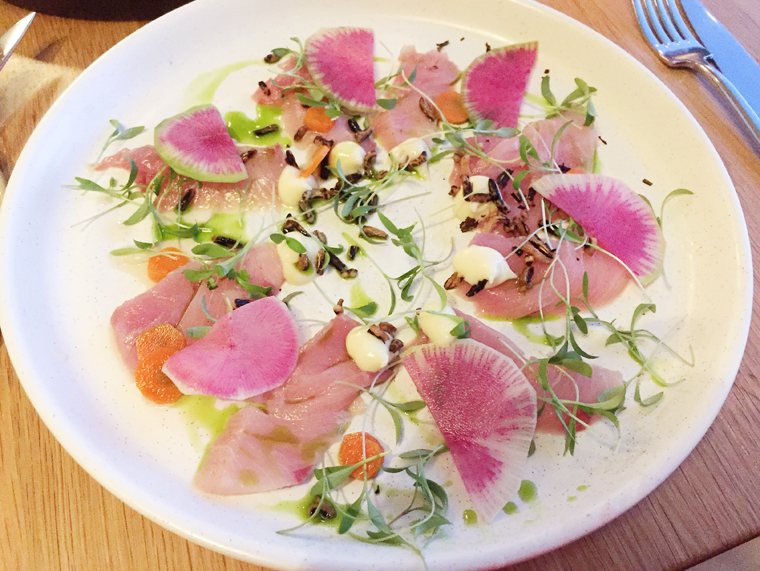 The skin on the Wild King Salmon ($33) was text-book perfect, as crisp as a potato chip. The surprise of endive marmalade was a nice accompaniment that added a bitter-sweet jamminess.

At this time of year, who can pass up Spiced Pumpkin Toffee Pudding ($10) for a sweet finale? Not I. The moist cake, like a British steamed pudding, embodied autumn’s warm baking spices of cinnamon, cloves and allspice. The naval orange and mascarpone ice cream tasted just like a beloved creamsicle. 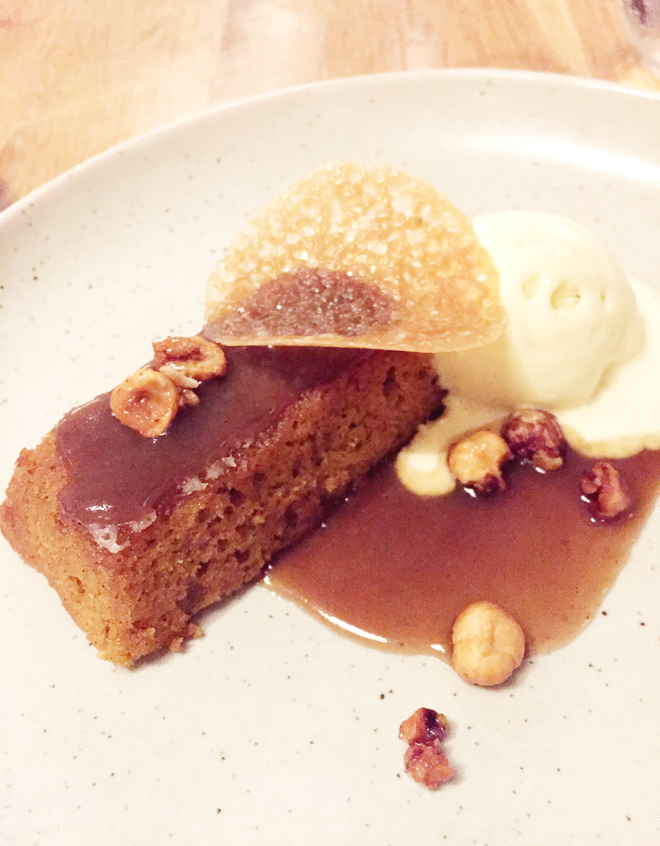 Pumpkin toffee pudding to dig into. (Photo by Carolyn Jung)

Best yet, unlike so many swank hotel restaurants in San Francisco, valet parking at this Berkeley institution is a mere $5.