Sushi Sundays at The Sea by Alexander’s Steakhouse The Sunday Sushi platter (doubled in size here to serve two) at The Sea by Alexander’s Steakhouse.

At least now at The Sea by Alexander’s Steakhouse in Palo Alto.

The upscale seafood-focused restaurant with the chic, Tiffany-like blue dining room can be a spendy experience, often more suited to a special occasion or a business account meal.

But on Sunday nights from now through Sept. 1, the restaurant is featuring a chef’s choice sushi platter for a reasonable $35 per person. Recently, I had a chance to try the new sushi special when I was invited in as a guest of the restaurant.

Sunday evenings are definitely a quieter time for the restaurant. Only a few people nursed drinks at the bar, while in the dining room, a few tables definitely seemed like they were celebrating a noteworthy moment. The seafood theme carries over into the decor.

We left ourselves in the hands of the kitchen and Executive Chef Yu Min Lin, who created a truncated tasting menu for us with the sushi platter included.

What would a meal at The Sea (or any of Alexander’s properties for that matter) be without starting with the signature hamachi shots ($28 for six)? My husband and I each received one shot glass, filled with fresh hamachi cubes layered with avocado, ginger, jalapeno, and truffled ponzu. There’s a reason why this has been on the menu since Alexander’s opened its first steakhouse. Not only is it a fun appetizer, but the flavors — spicy, peppery and umami-forward — just wake up the palate big-time. 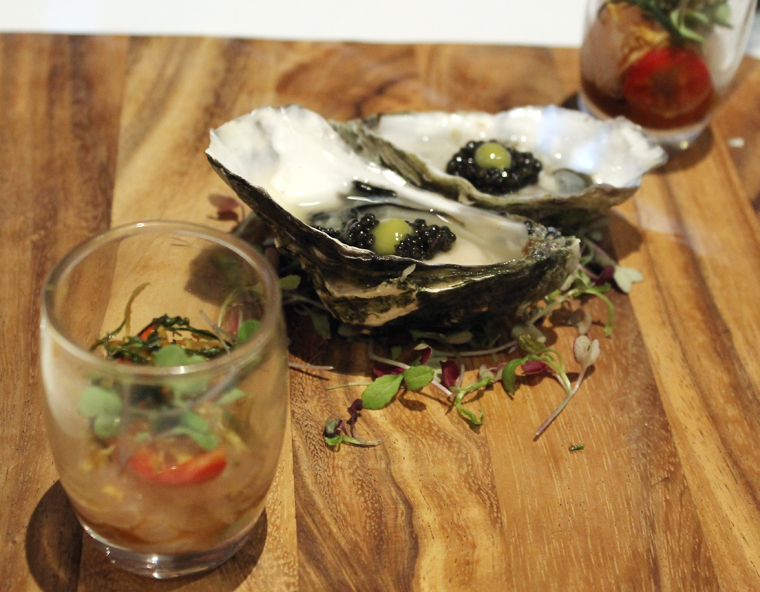 Hamachi shots and oysters on the half shell with caviar. You have to have extreme willpower not to go crazy over the bread service here.

Two oysters on the half shell came alongside, dotted with small black pearls of white sturgeon caviar and yuzu gel that added a nice hit of floral citrus to the salinity of the bivalves.

The bread service is out of this world. Our server noted that some diners come to the restaurant just for this. It’s hard to resist when another server comes to the table bearing a basket of warm cheddar-lobster-chive biscuits and mini sesame croissants. They burst with heavenly butter flavor. The croissant is beyond flaky. With the biscuit, you taste the cheddar predominantly while it’s warm. It’s only when it cools off that you notice the lobster taste, too.

The sushi platter, normally about 8 selections per person, was double its normal size, since it was made for two people. It’s a massive square platter with square divots in it to hold pieces of tuna roll, hamachi, torched salmon, tuna, octopus, veggie roll with asparagus, crab roll, and tempura shrimp roll. Soy sauce, ponzu sauce, and a mix of pickled cucumber, daikon, and intense ginger occupied the other compartments of the platter.

For $35 at a restaurant of this caliber, you don’t come in expecting all-you-can-eat or a faux wooden boat loaded with sushi. This is a modest amount, but done artfully and skillfully, using top-quality seafood. You don’t shovel this down, but eat each one slowly — with lucite chopsticks — to appreciate every piece. I was especially impressed with the nigiri sushi. At most other places, the fish slices are about the same size as that of the rice ball underneath. Not here. The slices of fish are cut generously, so they completely obscure the rice, draping over it like fine fabric. Wagyu and lobster for a posh surf-and-turf.

A Maryland soft shell crab ($29) was fried until deeply golden with a thin, airy batter as fragile as a potato chip, then split for us to share. A roasted tomato sauce garnished it, along with fresh roasted corn kernels, alfalfa sprouts and shiso.

The main course was Wagyu Tajima tenderloin (from the actual tasting menu), so full of fatty juices that it just coated your entire mouth when you took a bite. A sweet chunk of smoky lobster crowned it. Spring fava beans were tucked into a creamy risotto, and shatteringly crisp kale leaves completed it.

Ice cream, cake and meringue in a fantasy-like tableau. 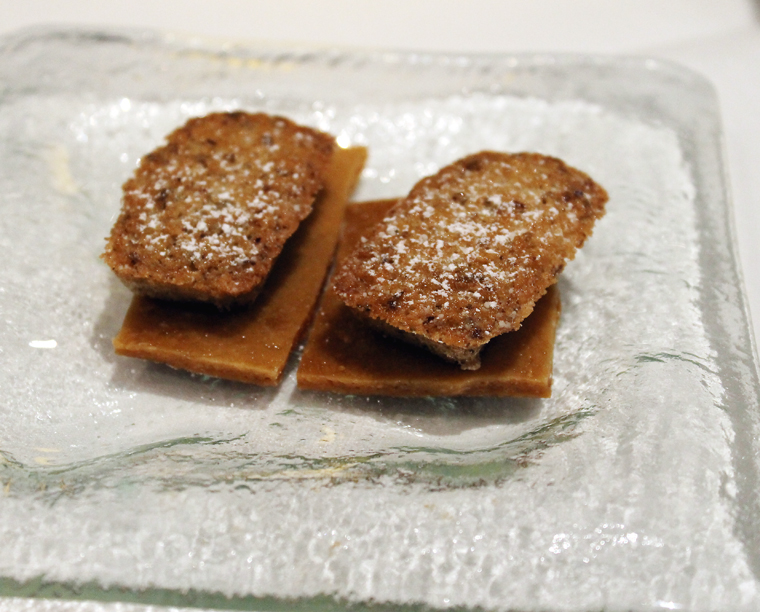 Dessert was like a tableau from “Alice in Wonderland” — soil made from crumbled devil’s food cake crumbs that hid a fluffy strawberry mousse underneath, with a bumpy dark rock alongside that was really a chocolate-shelled ball of cookies & cream ice cream bon bon, and a cute-as-a-button meringue mushroom standing at attention. It’s a light dessert with lots of varied flavors and textures.

Mignardises arrived next in the form of coconut brittle with a big toasty taste, and hazelnut financiers that were so nutty tasting. 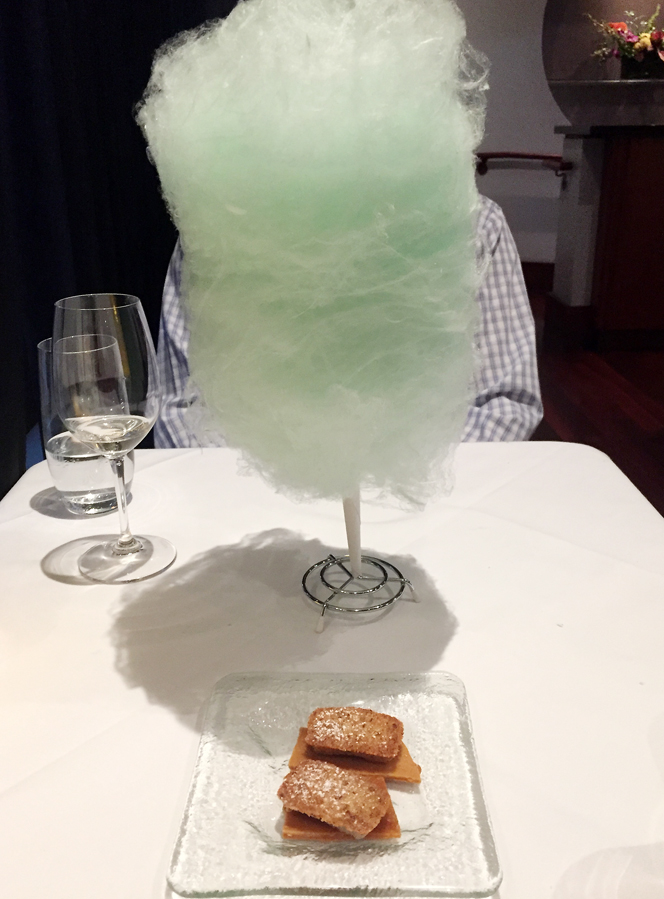 My husband doing his impersonation of a Rene Magritte painting — only with cotton candy instead.

If you’ve ever dined at an Alexander’s restaurant, you know what the true finale will be, though: a bouffant cone of cotton candy as big as your head. This night, the flavor was lime. Tinged a pale green, it reminded me of drinking lime Kool-Aid as a kid. Yes, it’s pure sugar. But it brings such a smile that you’ll find yourself tearing off wispy piece after wispy piece until there is no more. 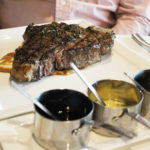 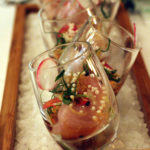 And: Dinner at Alexander’s Steakhouse in San Francisco 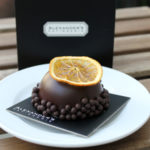 Plus: Goodies from Alexander’s Patisserie