Let me just say right off: I am not fond of pumpkin pie.

I know this makes no sense, but I thoroughly love pumpkin bread, pumpkin muffins, pumpkin ice cream, and pumpkin cheesecake. Just not pie.

Don’t get me wrong, I love pie in general. But there’s just something that turns me off about pumpkin pie. Too much of a one-dimensional flabby texture? Perhaps. All I know is that if pumpkin pie is the only option for dessert, I’d rather go without. And for a dessert lover like me, that’s saying a lot.

Yet I love the drama and festiveness of a big, beautiful dessert decked out in the color of fall. So that’s why I was thrilled to find this extraordinary cheesecake recipe by renowned New York Pastry Chef Pichet Ong, a University of California at Berkeley grad, who has worked at Chez Panisse in Berkeley and La Folie in San Francisco, as well as Jean Georges, and Spice Market, both New York restaurants owned by celebrated Chef Jean-Georges Vongerichten. Ong now is chef and owner of P*ONG, a cutting-edge dessert spot in New York City, where his creations fuse both the sweet and the savory. 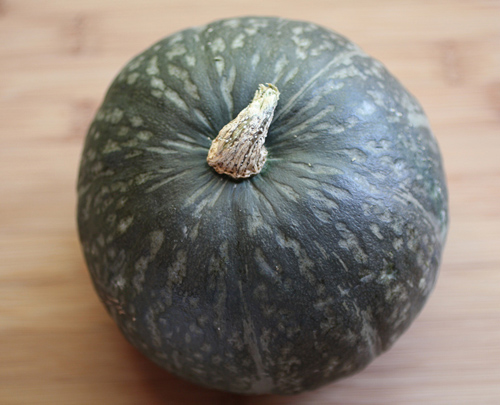 His recipe for Kabocha Squash Cheesecake with Walnut Crust comes from his cookbook, “The Sweet Spot” (William Morrow). No pumpkin here; only kabocha squash. Also known as Japanese pumpkin, it’s probably most familiar to you as a component in assorted Japanese tempura. I don’t know about you, but the orange curve of golden-battered squash in the mound of fried veggies and shrimp is the tempura piece I covet most.

I love its natural honeyed, nutty sweetness, and its fluffy, starchy texture that’s like roasted chestnuts or a roasted russet potato.

Mixed with cream cheese, cinnamon, ginger, nutmeg, and eggs, the unique flavor of kabocha still shines through. Unlike other cheesecakes, this one has a modest amount of cream cheese, too — only 8 ounces. It makes for a cheesecake that’s not so over-the-top rich, a cheesecake you can still easily finish a slice of, even after having your fill of turkey and fixings.

Even better, bake the cheesecake the day before Thanksgiving, and let it cool and firm up in the fridge overnight. That leaves your oven free for other things on the actual holiday.

Serve the cheesecake with the accompanying recipe for Sweetened Condensed Milk Chantilly, or dollops of lightly-sweetened, thick whipped cream.

One bite may just make you forget all about pumpkin pie.

(makes one 9-inch cheesecake, about 10 servings)

To make filling: Prepare a steamer by filling a large round casserole with water to a depth of 3 inches; the casserole should be able to hold the squash comfortably and have a tightly fitting lid. Put a steamer rack or enough crumpled heavy-duty aluminum foil to support the squash on the bottom; the rack or foil should be just above the waterline.

Set over medium heat and bring to a steady simmer. Put whole squash on rack, cover pot, and steam until a knife pierces the flesh easily, about 1 hour.

Remove from heat, uncover the pot, and cool squash in steamer until cool enough to handle.

Spread walnuts on a rimmed baking sheet and toast, shaking pan occasionally, until fragrant, about 15 minutes. Cool completely. Turn oven down to 300 degrees.

Put walnuts and ¼ cup of brown sugar in bowl of a food processor and pulse until walnuts are coarsely ground. (You can also crush the walnuts by hand, gently pounding them with a heavy skillet or rolling pin.) Transfer walnuts to a mixing bowl and add graham cracker crumbs, lime zest, cinnamon, ginger, salt, and remaining ¼ cup brown sugar. Mix well, then add melted butter and mix with your hands until everything is evenly moistened. Transfer mixture to prepared pan and press into an even layer on the bottom.

When squash is cool enough to handle, remove it from steamer, cut in half, and scoop out and discard seeds and strings. Scoop out 2 ½ cups of squash flesh into a small bowl. Reserve any remaining squash for another use.

Transfer filling to the cooled crust. Bake until center is set but still slightly jiggly, about 1 hour. Cool completely. Refrigerate six hours or overnight, then unmold.