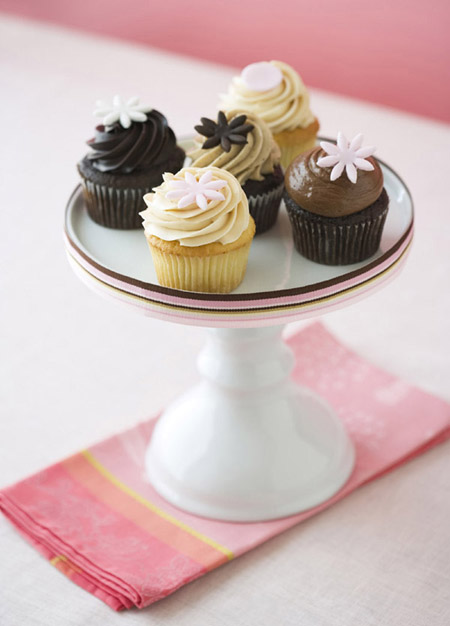 Cupcake mania, which hit New York first (“Sex and The City,” anyone?), then spread to Chicago, Los Angeles, and San Francisco, is finally making its way to the South Bay/Peninsula.

Talk about taking your sweet time.

While those metropolitan areas long have boasted stand-alone bakeries specializing in nothing but cupcakes, we who have been frosting-starved in the South Bay/Peninsula finally will get our baked-good due when Kara’s Cupcakes is expected to open two locations in September: one in San Jose’s Santana Row (next to Pluto’s), and the other in Palo Alto’s Town & Country Village. Because the Santana Row location will be tiny — just 300 square feet — it’ll have a smaller selection, but promises to showcase the bakery’s most popular flavors.

Kara Lind, who worked in marketing for Conde Nast, found her true passion when she attended Tante Marie Cooking School’s baking program in San Francisco. Her first Kara’s Cupcakes bakery opened in 2006 on Scott Street in San Francisco. Since then, she’s added a second location in San Francisco, this one at historic Ghirardeli Square.

The cupcakes are made daily with such premium ingredients as Scharffen Berger chocolate, Clover Dairy products, and Flying Goat organic coffee. Regular cupcakes, $3 each, come in flavors such as Buttery Buttermilk, Chocolate Velvet, and Kara’s Karrot. Filled cupcakes, $3.25 each, come in such decadent concoctions as the “Fleur de Sel” (a chocolate cupcake with caramel filling, ganache frosting, and sea salt).

What does Lind find so irresistible about cupcakes?

“They are just filled with so much happiness,” she says. “They are like a little piece of joy.”

Who can argue with that?