Take Five With Legendary Chef Bradley Ogden, Who Dishes On His Newest Project 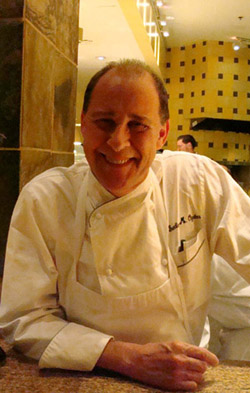 Celebrated chef and restaurateur for 35 years, Bradley Ogden has overseen such acclaimed restaurants as Campton Place in San Francisco, the Lark Creek Inn in Larkspur, Parcel 104 in Santa Clara, and his eponymous Bradley Ogden in Las Vegas.

His latest project may catch you by surprise. It’s in — of all places — Solvang. Yes, the noted chef is about to put his stamp on a new, upscale restaurant in the land of windmills and Danish bakeries. Founder of the Lark Creek Restaurant Group (where he’s still a major shareholder and a board member), and in charge of the culinary programs at Parcel 104 and Bradley Ogden restaurants, Ogden let us in on the scoop about his new venture.

Q: Why in the world Solvang?

A: (laughs) It’s a consulting job at the old Royal Scandinavian Inn. The Chumash tribe bought it. They own a casino 4 miles away, but it’s not connected to this project.

It’ll be a boutique hotel with more than 100 rooms. Yes, we have to keep the country-like façade, but the inside will be gutted and the look will be contemporary and warm. I’m redoing the restaurant there. Hopefully, it’ll open in early December. Nope, there’s no name for it yet.

Q: How expensive of a project is this?

A: It’s probably at $12-$20 million project with the hotel and restaurant.

A: It will be about 80 seats with a glassed-in kitchen. When you walk in, there will be French doors that will open up to the lounge-bar area that will have water features, landscaping, and fireplaces. The design will be sort of a light California-Hawaiian decor.

You have one of the biggest agricultural areas in the world here, so sustainable agriculture will be a big part of the menu. It will be influenced by local fishermen and local growers. The wine list will be 90 percent American, up and down coast of California, with a heavy emphasis on the Santa Ynez, Paso Robles, and San Luis Obispo area.

It will be an upscale, contemporary American restaurant with prices in the $30 and under range.

Q: And who is the target clientele?

A: Locals, which is the mainstay of any restaurant. And we hope to draw in tourists.

Q: Is it easier or harder to open a restaurant these days?

A: It’s harder now. It doesn’t get any easier even when you know what conceptually works and doesn’t work. We’re in an economy that’s fluctuating, but it’s nothing that we haven’t been through before. People don’t have a lot of money to spend. They may stay closer to home. But they’ll always eat out. It’s cheaper to dine out than eat in.

Q: You mean, when you shop at Whole Foods?

Q: What do you think of all those reality-TV cooking shows? Do you watch them? Shun them? You know, your whole crew at Parcel 104 is addicted to “Top Chef.”

A: Oh, I know! I watch “Top Chef” occasionally, when there’s nothing else to watch.

Everyone in god’s green earth wants to be a chef now. They have no idea. They just see stardom, cookbooks, restaurants. But there’s only a small percentage who get to that level. They look at it more from the show of it, than the heart, soul and passion of it. Most don’t realize how much work you have to put into it to make it a reality. They all want to get to finish line before they start.

Q: Almost all your sons have followed you into the business?

A: My son, Bryan, 30, is in charge of the Vegas restaurant. And he’s going to open his own restaurant in Los Angeles called Apple. The owners are from Manhattan, that’s why the name. My oldest son, Chad, 32, has been in Tokyo, and Hong Kong. He’s now the chef of an American restaurant concept for MGM in Macau. And my baby, Cory, 28, is in medical school.

Q: So he’s the only one who didn’t go the cooking route?

Q: No plans to retire soon?

Q:  So you’re living the good life in the Santa Ynez area now. So fess up, are you chowing down all the time on Danish cookies and pastries?

A: (laughs) No, I’m not. I’m watching my trim, boyish figure. I do love a good custard-filled donut, don’t get me wrong. I found a great little donut shop nearby, the Donut Hut in Buellton. But I try not to go there too often.