A Peek Inside the See’s Candy Factory 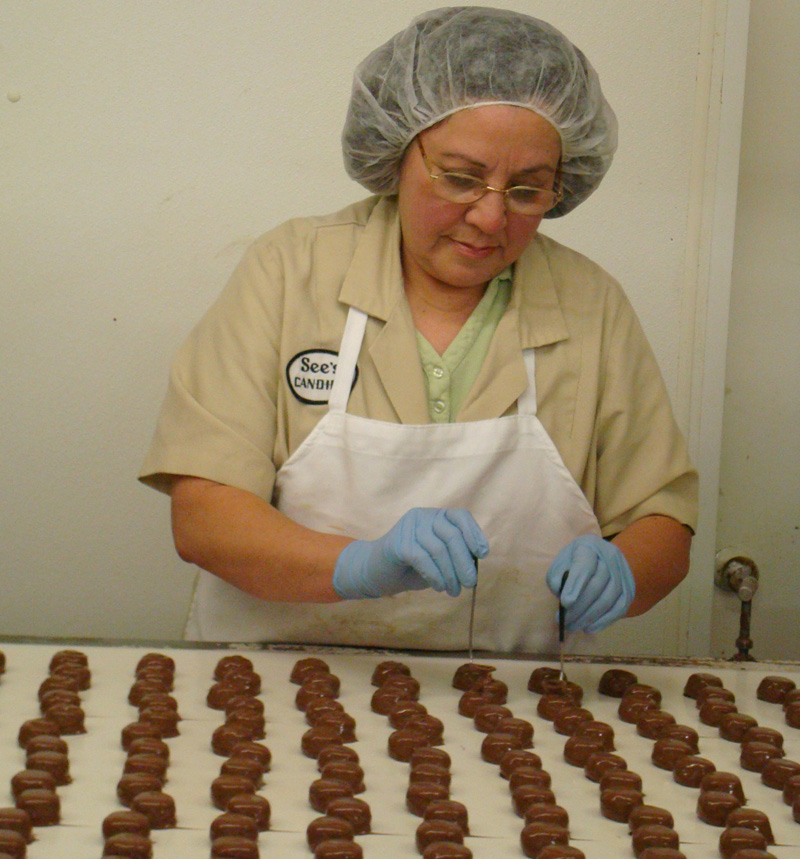 I’m a “nuts and chews” gal. Always have been. Always will be.

Like so many of you out there, See’s Candy has been a constant in my life, through so many Valentine’s Day, Father’s Day, Mother’s Day, and Christmas celebrations. The familiar white box, with its old-fashioned cameo photo of founder Mary See, was a sweet staple in my family’s house.

As a child, I sometimes got scolded by my Dad for pinching the corners of all the candies in the box to see what fillings they held inside. As an adult, I was in awe of my friend Lori, who had the uncanny ability to discern what each piece of candy was, just by looking at it.

With my long ties to the candy, it’s no surprise that I jumped at the chance when recently invited to tour See’s three-story factory in South San Francisco. (Sorry, you sweet tooths out there: See’s doesn’t offer regular tours; they are by invitation only.)

The aroma of sugar, chocolate and butter hits you the moment you walk into the quaint lobby, with its frosted Deco light fixtures and spic-and-span, black-and-white checkerboard floor. Lest you get famished while you wait for your tour guide, there is a domed glass serving dish in the waiting area that holds candy samples you can help yourself to. 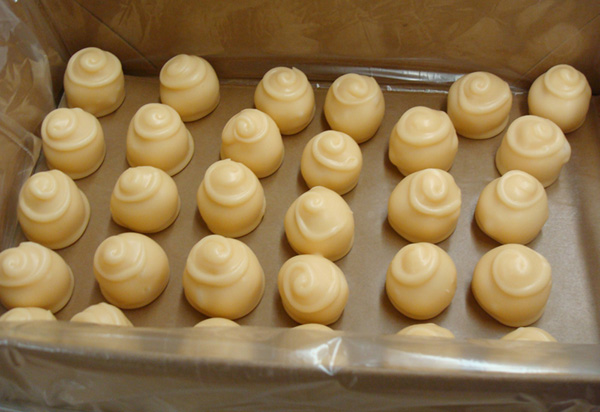 This is one of two See’s factories. The other, about the same size, is in Los Angeles. This is the busy time for the candy company, as 350 employees in the San Francisco factory alone gear up to turn out chocolate Santas, and other Christmas treats. The candy with the longest shelf-life is made first (lollypops, which are good for 100 days); the ones with the shortest shelf-life are made last (cream-centered bonbons, which keep for only 15 days).

All seven production lines operate during the fall/winter holiday season. On a given day, the San Francisco locale churns out anywhere from 42,000 to 72,000 pounds of candy a day.

See’s has more than 200 retail stores now, as far east as Chicago; as well as airport kiosks and temporary holiday storefronts.

The See family no longer owns the company, which it began in 1921 in Los Angeles. In 1972, they sold it to investment manager Berkshire Hathaway, Inc. Nope; you won’t find Berkshire Hathaway CEO Warren Buffet wandering around here, nibbling on molasses chips and divinity. But he does have a fondness for the candy, says my guide, Production Manager Robert McIntyre. Indeed, you will find See’s Candy at Berkshire Hathaway shareholders meetings, usually peanut brittle — Buffet’s favorite — in boxes with his likeness on the cover.

Despite no longer being family-owned, See’s has managed to retain its venerable quality. Computers operate much of the equipment now, but the bonbons are still dipped by hand. A high-tech chemistry lab on site tests for potential bacteria in every batch of candy before it is released for sale. At the same time, some of the candy, such as the fudge, is still made using Mary See’s original recipes.

Why has See’s Candy endured in popularity all these years, even when so many gourmet chocolates now have popped up on the market?

“It’s consistency. It’s quality. And it’s a certain mystic,” McIntyre says. “We don’t change our stores. They are old-fashioned. You grow up with See’s, and when you’re an adult, it’s still the same. The candy is also a reasonable price (a 1-pound box is $15). You get value in what you’re purchasing.” 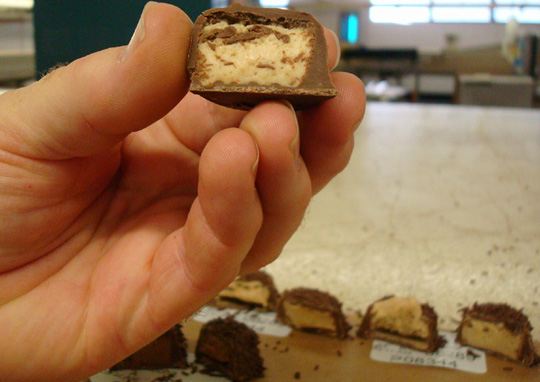 See’s also has a liberal return policy. You can demolish half a box of candy, and still return it for a full refund, no questions asked, McIntyre says.

And let’s not forget one of the most endearing traditions that has existed from Day One: With every purchase in the store, you get a piece of candy to nibble on at no charge. Ahh, if only everything we bought came with a freebie like that. As we walked around the factory, I couldn’t help but picture that indelible scene from “I Love Lucy,” with Lucy and Ethel stuffing their faces with chocolate, trying to cover up the fact that they were falling farther and farther behind while manning a conveyer-belt of candy.

I reaped the rewards, but didn’t have to go to work like that duo did. Instead, as we walked around, McIntyre kept encouraging me to sample any candy being made. (Hey, it’s tough work, but someone has to do it.)

McIntyre admitted he can’t resist whenever employees are churning out Café Au Lait truffles. I can see why. As I pulled one out of a just-packed box and bit into it, the coffee-cream center was still so fluffy, and the cup-of-Joe flavor really resonated. 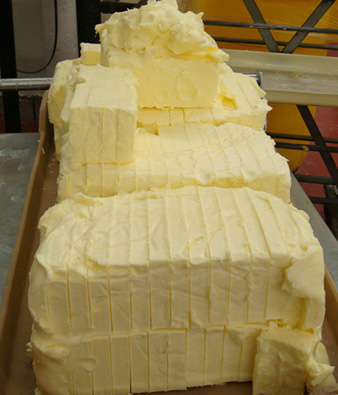 A special propriety blend of chocolate is made by Burlingame’s Guittard especially for See’s. All the nuts are carefully sorted to make sure no shells are lurking. Any sub par candies that stick together (called “Twins”) go to the employee store, where they can be purchased at a heavy discount. Any candies that fall on the floor during the production process? They go to a co-op of Central Valley farmers, who feed them to their pigs. Talk about porking out!

If a supplier runs out of a particular ingredient, See’s won’t make the particular candy rather than substitute something else. A certain type of date from the Middle East no longer was available when farmers there stopped growing them. So See’s stopped making its date-nut candies rather than switch to a different variety.

“Our consumers all have their favorite pieces of candy,” McIntrye says. “They can tell if something has been modified or changed. And they get upset.” 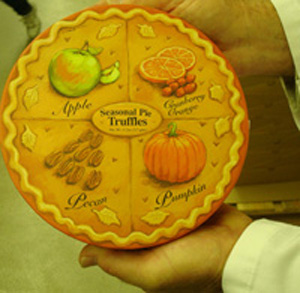 It can take only about four months from idea to production to create a new candy, using existing equipment. New for Thanksgiving this year is the “Pie Pack,” a round pie-shaped box filled with pie-flavored truffles: pumpkin pie, apple pie, pecan pie, and cranberry-orange pie.

The most popular candies are the milk Bordeaux, king caramel, and the nuts & chews assortment.

Not all candies are winners, though. The gourmet truffles, which were introduced one Christmas season, didn’t last beyond that. Perhaps a little too posh for See’s customers who prefer no-nonsense, fuss-free sweets?

After all, it’s really that satisfying taste of nostalgia that we enjoy most in See’s candy. And it’s what keeps us coming back for more. I don’t know anyone — no matter how old they are now, or how finicky their tastes have become, or how far away they live from California now — who doesn’t just want to dive in when that familiar box is opened up. 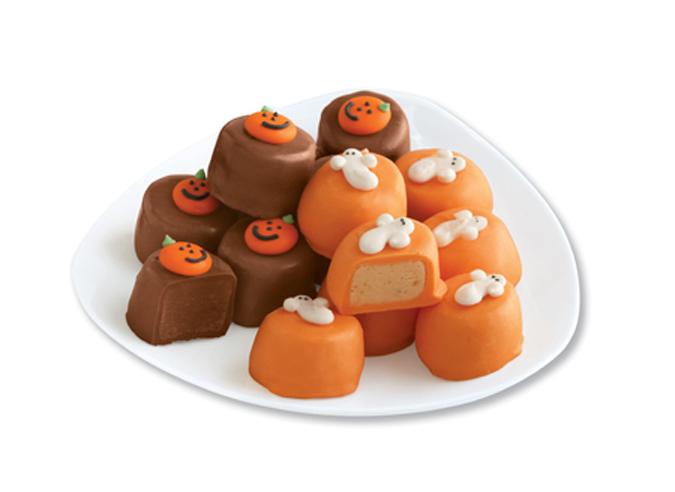 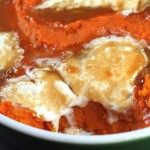