Sweet Breams Are Made of This… Who am I to disagree

Travel the world and seven seas

Everybody’s looking for something…

as cute and precious as these.

With apologies to the Eurythmics, I just couldn’t get that song out of my head when I visited this unusual Japanese bakery in San Mateo, Sweet Breams. It specializes in taiyaki — tiny, filled waffles shaped like fish that are made to order.

When I taught a class recently at nearby Draeger’s, Cooking School Editor Cynthia Liu told me I had to stop by Sweet Breams. Good thing I listened.

Owner Tara Wong, who lived in Tokyo for a spell, got hooked on these adorable snacks as a child when she’d visit May’s Coffee Shop in San Francisco’s Japantown, where they also are made.

Traditional taiyaki are about 5-inches long. Wong thought there would be an even greater appetite for smaller ones. Hers are about 2 inches long, and made with waffle irons imported from Japan. There are four waffle irons. Each is named after one of the Beatles. And yes, she laughs, “Paul” is the most consistent one.

She opened her shop about six months ago, and word is already spreading about it. Folks have come from as far as Sacramento to get their fix of the dainty, crispy, warm treats made from a smooth batter of both all-purpose and cake flours.

A tiny bit of batter is squirted into the small mold, then a dab of filling added in the center, before another squirt of batter is added on top. The two sides of the waffle iron are closed together as the waffle cooks over a flame. When the iron is opened up, what emerges is a golden-brown, fish-shaped goodie that does indeed taste like a munchkin waffle with a dab of gooey filling inside.

Wong offers the traditional azuki bean filling, as well as more contemporary ones such as vanilla, chocolate, and Nutella, which really rocks. There’s also a “Catch of the Week,” a special flavor. The taiyaki are sold in “half schools” (6 for $3.25) and “schools” (12 for $5.50).

The sense of humor continues throughout the menu. Wong also offers a “Batsu!” option. If you want, you can order a half school or school and get an extra one filled with wasabi. Yes, that would be undiluted, full-strength wasabi, too. In a Japanese-version of Russian Roulette, you and your friends take turns choosing a taiyaki to eat. The person who gets the wasabi one loses the game, and well, probably his or her taste buds, too. 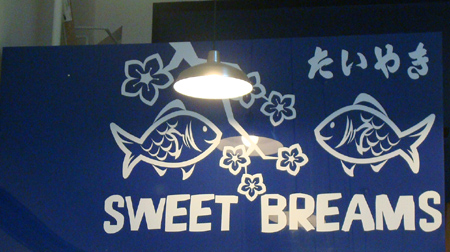 There’s also a secret menu for insiders. (Psssst, it’s actually on the Web site, too.) For instance, you can ask for “chum.” It’s the extra bits of cooked batter that fall off the mold that you can nibble on.

Terri Dien, Draeger’s senior chef instructor, also started creating cupcakes there a few weeks ago, smeared with aqua frosting to mimic water, and crowned with a taiyaki on top.