Warning: Now For Something A Little Different Hopefully, these pics of chapulines don’t scare anyone off.

Because that would be a shame.

Pan-fried grasshoppers seasoned with lime, salt, and red chile might be what gets people buzzing about the new Mezcal restaurant, 25 W. San Fernando in downtown San Jose. But what will keep them coming back are the luscious moles served here with style and graciousness.

The airy restaurant with an industrial chic vibe specializes in Oaxacan cuisine.  It was opened a month ago by Oaxacan native, Adolfo Gomez, who was formerly operations manager at the Silicon Valley Capital Club.

After you are seated, servers bring warm, fresh-fried chips but not salsa to your table. Instead, you get a small sampler of three moles — negro, coloradito and estofado — to satisfy your curious taste buds right off the bat. They’re all wonderful, particulary the inky, rich negro with its flavors of bittersweet chocolate, cinnamon and chiles.

Our server said the grasshopper appetizer is ordered by almost every table. So, naturally, when I went there for lunch today, I had to order them, too. It didn’t hurt that I was dining with three guys, all former colleagues, who were more than game to eat bugs with me.

By the way, I should acknowledge that I am a veteran insect eater.

You see, when you’re a food writer and your editor suggests you get a visiting insect specialist who cooks with bugs to make you something to try, well, you can’t say “no.” Not really.

So years ago, I wrote a story in the San Jose Mercury News, about the time I ate bees. Luckily, they were in a cake. And even more fortunately, they were pulverized into the batter, so you really wouldn’t have known they were there.

As for the taste? I couldn’t distinguish bee notes, necessarily. To me, it just tasted like one of those vegan-type cakes, where the taste is a bit bland and the texture too gummy.

So today, it was on to grasshoppers. Imported ones from Oaxaca, to be exact. About three dozen or more tiny ones arrived in a bowl along with tortilla chips and guacamole. I tried one grasshopper solo first. The tang from the lime juice really came through, with just a whisper of spice. Beyond that, it was all in the texture — crunchy, papery, a little like the crispiest bits of a phyllo pastry.

Barry tried one, and called it a day, while Ken, De, and I probably ate six each with dollops of guacamole. The leftovers got wrapped up and delivered to Brandon, back at the office on deadline to write a story. He later emailed me, pronouncing them “great!” 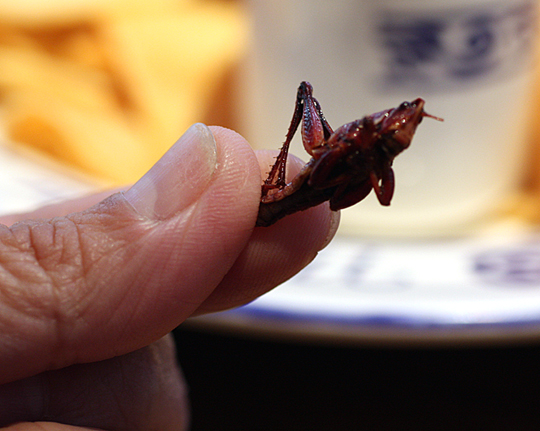 Which just goes to show you never know sometimes what you will like eating. Insects may not be a food of choice for us, but for many destitute communities, it’s a valued and easy source of protein. For us, it may be a mere novelty. But it’s one that’s surely eye-opening, thought-provoking, and palate-awakening.