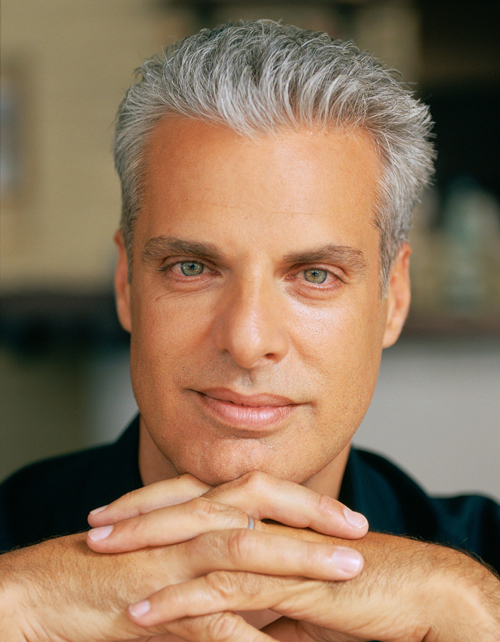 You may know Eric Ripert as executive chef of Le Bernardin, one of the few restaurants in New York City to have garnered a four-star rating from the New York Times.

You also may know him from his stints as a guest judge on Bravo TV’s “Top Chef.” You probably recognize him, too, from his appearances on the Travel Channel’s “No Reservations,” with his buddy, the irrepressible Anthony Bourdain.

What you may not know is that this suave, 43-year-old Frenchman has a wicked sense of humor that easily catches you off guard, and that he carries a most interesting collection of items in his pockets every day.

Born in Antibes, France and reared in Andorra, a small country between France and Spain, Ripert left home at age 15 to attend culinary school.  Two years later, he moved to Paris to cook at the famed La Tour d’Argent. That was followed by stints with Joel Robuchon in Paris, then Jean-Louis Palladin at the Watergate Hotel in Washington, D.C., before he moved to New York to work as sous-chef to David Bouley.

Not long after, he became chef de cuisine at Le Bernardin. When the restaurant’s founding chef died unexpectedly, Ripert took over the helm at the tender age of 29. He’s been there ever since, upholding the same high standards.

Ripert’s newest book, “On the Line” (Artisan), is not your standard cookbook. Written with Christine Muhlke, a New York Times editor, it tells the behind-the-scenes story of the restaurant, through evocative text, glorious photos, and signature recipes. It’s a fascinating read.

It explains in detail how the kitchen at this venerable restaurant works, who the players are, and what their tasks are. It’s filled with intriguing facts and lists, including what the employees eat for staff meals (burgers and fries to lobster pasta); the number of pounds of fresh black truffles the restaurant uses each week when in season (6); the average number of minutes it takes to cook a dish (5); and the restaurant’s monthly flower bill ($12,000). 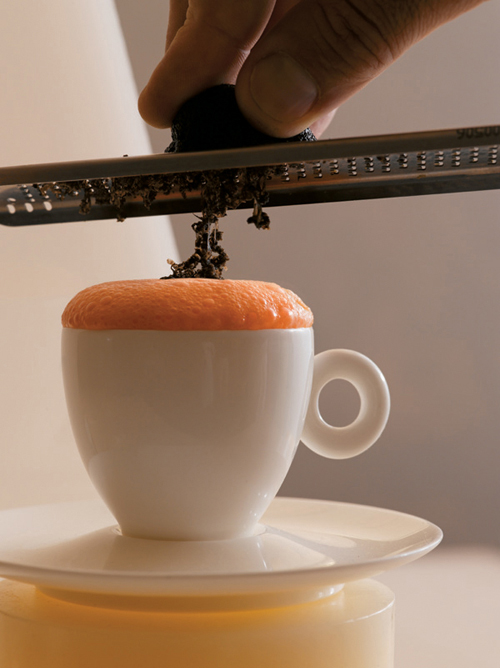 Throughout 2009, Le Bernardin will be helping to alleviate hunger by working with City Harvest, an organization dedicated to feeding New York City’s hungry, and which Ripert sits on the board of. During this year, City Harvest will receive $1 for every guest that dines at Le Bernardin. An additional $1 donation will be given to the organization for every guest who buys a copy of “On the Line” at the restaurant.

I had the fun experience of judging cookies galore with Ripert in December at the annual Gene Burns’ Holiday Cookie Exchange contest. A few weeks ago, he graciously made the time to chat by phone while on his book tour.

Q: Of course, one of my first thoughts after reading ‘On the Line’ was that I have to eat at Le Bernardin one day! But I know you had other reasons for wanting to do this book. What were they?

A: I have written two cookbooks before. I didn’t want to do another recipe book. I wanted to do an inspirational book, a documentary on the life of our team. To me, it’s fascinating what a restaurant has to go through in a day in order to deliver excellence.

Q: I often hear people griping when they start seeing $30 entrees on menus. Do you think that most diners are unaware of all that goes into making a dish?

A: I think the clientele is more and more aware. People spend money now without thinking, ‘Oh, I can do that at home for five bucks,’ which of course, is not true. You can’t.

In general in the restaurant industry, the high-end market works with low margins. The profits are very narrow. When you go to luxurious restaurant, it’s a good value.

Q: Compared to going to McDonald’s?

A: For sure. We’re talking about providing great surroundings, great service and high-quality ingredients. Those things have a price. The luxurious side of the industry is very passionate, and often does not think rationally about business. We are a very giving industry.

Q: In the book, you reveal that Le Bernardin’s lease will expire in 2011. Do you know what will happen then with the restaurant?

A: I have no idea yet. We may stay here or we may not stay here. 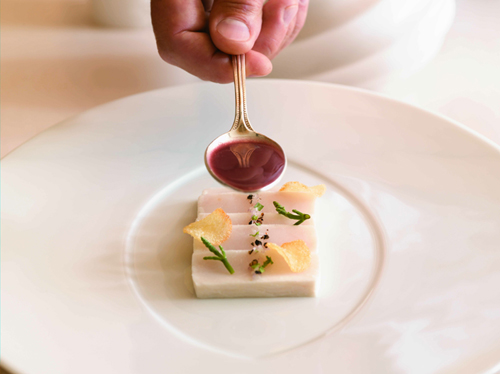 Q: How did you know so early on that you wanted to be a chef?

A: I had strong passion about eating to begin with. I loved cooking already. It was a very easy choice. I was always cooking with my grandmother and mother. I was part of the team.

Q: If you hadn’t been a chef, what do you think you would have become?

A: I was tempted to be a park ranger because I love nature. I was living in the mountains. I thought it would be a good life.

Q: No regrets that you aren’t a park ranger now?

A: (laughs) No regrets at all.

Q: When we judged cookies together, you showed me the Spanish medallion you wear around your neck. You’ve worn that since it was given to you when you were 14?

Q: You also carry half a dozen or so charms in your pocket of Hindu and Buddhist deities. What do they represent to you?

A: An inspiration throughout the day. When I touch them, I remember to be kind and many other things. I believe they are protection and inspiration.

Q: And you never have trouble going through airport security with these in your pockets?

Q: And you’ve never left them by accident in the laundry?

Q: So when you and Bourdain hang out together, what is it really like?

A: We usually don’t remember because we are wasted.

Q: You’ve known him since he wrote ‘Kitchen Confidential’?

A: Yes, he was saying very nice things about Le Bernardin. I was kind of relieved.

Q: But have you ever worked in the type of wild, rock-n-roll, anything-goes kitchens that he has?

A: My world was not as exciting as he described. I worked in very clean, very disciplined kitchens.

A: (laughs) Oh, for sure. I earned my position. My wife does not cook, though her mother is a wonderful cook. Our five-year-old son likes to eat a lot of different things. He’s very adventurous.

In the summer, I like to grill steaks. I prefer charcoal for the flavor. I don’t bake, though. I find it most boring. It’s not enough instinct, and you have to be too precise.

Q: I hear you and your chef colleagues are totally into techno-pop?

A: That was a long time ago. Now, we go for classical music.

I’m kidding. Techno pop is over. Lately, I like jazz a lot.

We don’t listen to music in the restaurant, though. Not in a professional kitchen. We concentrate on what we have to do.

Q: You have this incredible air of elegance about you. Is there any goofy or klutzy side to you?

A: Why thank you!

(He ponders in silence. Then he yells to his assistant, Mandy.)

Mandy, am I goofy?

She says I’m a snob. A charming snob.

It’s not like I’m serious all the time. But I’m not sure goofy is what I am. I’m a smart ass; put it that way. 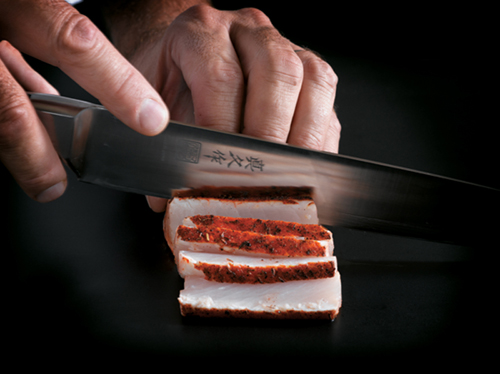