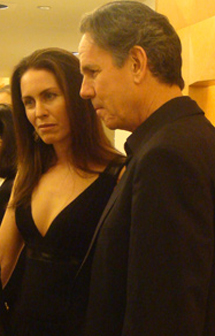 Yes, a knowledgeable source has confirmed that four-star Chef Thomas Keller of the French Laundry in Yountville is indeed engaged to long-time girlfriend, Laura Cunningham.

Cunningham is the former general manager of the French Laundry and former director of operations for all of Keller’s restaurants. It was she who was largely responsible for shaping the flawless, unobtrusive, elegant service the French Laundry is known for. She left the fold in 2006 to start her own consulting business. Around the same time, she and Keller also split, after having been together as a couple for a decade.

They met when Keller bought the French Laundry building in 1994. Cunningham, who grew up in St. Helena and had worked for Chef Jeremiah Tower, came knocking with her resume. Keller said there were no jobs, but took the resume anyway, before he quickly shut the door.

A few days later, he came to his senses and called her back to give her a job.

No word yet on whether the nuptials will be this year or next.

It already will be quite the busy year for the duo. Cunningham is opening her own restaurant in Yountville, across the way from the French Laundry. The Sicilian and Southern Italian restaurant will be named Vita, after her grandmother. It is expected to open this fall.

Also this fall, Keller will open another branch of Bouchon Bistro and Bouchon Bakery in Beverly Hills, next to the Montage Hotel.

With all that already on their plates, would a 2009 wedding be too much to handle?

Stay tuned….After all, if anyone can pull off the perfect wedding under any circumstances, it’s these two.