Food Gal Contest: Winner of the Morton’s Steakhouse Dinner, Plus A New Dinner Prize Up For Grabs Talk about fierce competition for the prize of dinner for two at any Morton’s The Steakhouse in the world. I sure am glad my husband, Meat Boy, had the responsibility of choosing the winner this time around, because I would have been hard pressed to pick just one from all the incredible entries submitted.

The winner of this ultimate carnivore contest will be revealed at the end of this post. But before you scroll down like mad, you’ll first want to know about the delicious new contest that starts today.

The Tavern at Lark Creek in Larkspur is kindly offering a prize of dinner for two (a total value of $75, which can include beverages, too). The contest for this prize is open to anyone in the world, as long as you can find your way to the restaurant in Marin County, Calif. within the next year. That’s because the dining certificate is good — you guessed it —  for one full year. 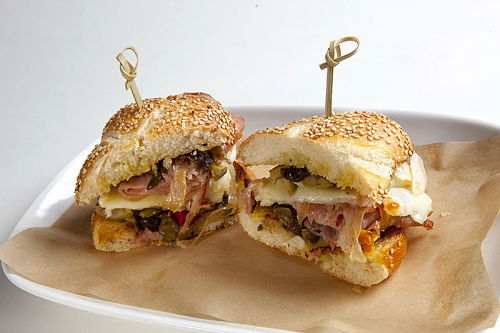 So what do you have to do to win? Read on.

You may recall that the Tavern at Lark Creek was formerly the venerable Lark Creek Inn, a more special-occasion restaurant with fancy tasting menus. Its new incarnation is far more casual and laid-back, with the likes of crispy cornmeal-crusted catfish, shrimp and grits, and a New Orleans muffaletta on the menu.

It’s indicative, of course, of the challenging times we are living in.

In this era of cutting back, and making do with less, what have you learned most?

For me personally, it’s this:

…That I sure used to waste a lot of time shopping aimlessly in malls, as if it were pure entertainment or a sport. Now that I don’t do that anymore, I’m surprised that I don’t really miss it. And boy, do I have a lot more valuable time as a result.

…That when times are tough, and unexpected pitfalls happen such as you get laid-off, not only do friends, but people you don’t even know or barely are acquainted with, have your back. I can’t tell you how grateful and touched I am that so many readers, news sources and distant colleagues, whom I’ve rarely dealt with in person, if at all, send me leads on jobs or just the most astoundingly heartfelt, encouraging emails.

…That spending your husband’s birthday noshing on pizza and soft-serve can be every bit as wonderful, memorable, and romantic as a six-course tasting menu at a far fancier restaurant.

Now, it’s your turn: In this era of cutting back, and making do with less, what have you learned most?

You can answer with just one example or multiple ones; it’s purely up to you. The most intriguing or memorable response to that question will win the dinner for two to the Tavern at Lark Creek.

Deadline: Entries must be received by the end of the day, Aug. 7. Anyone can enter, but just know that the certificate is good for one year at this N. California restaurant. Winner will be announced on Aug. 9. 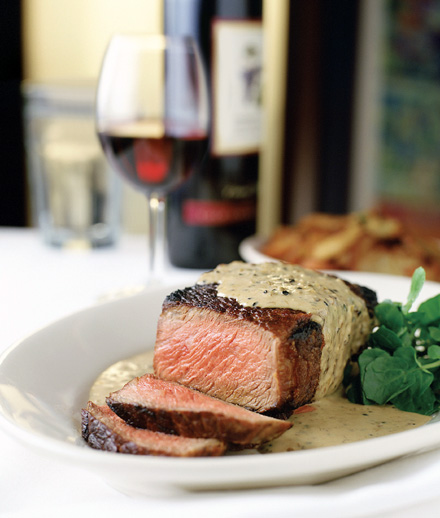 And now, for the winner of the Morton’s The Steakhouse dinner for two:

Lisa, who wrote: “This is not only a story about my meat-loving husband, but apparently all meat lovers that appreciate a good, big burger. Nothing makes my husband happier than an In N Out 4X4, animal style. I think I love beef just as much as the next woman (or man), but I tried a bite of his once and found it way too overloaded with meat. So, I usually stick with a single patty cheeseburger. I don’t like food that can’t fit somewhat neatly into my mouth. On one visit, as we were getting ready to bite into our burgers, I saw my husband make the scariest face I’ve ever seen on his normally very sweet and mild-mannered face. His eyes bugged out as he stretched his jaw as far down and wide as possible to take a bite. At least three different veins surfaced around his forehead. I thought he looked psycho-killer crazy. In fact, he looked that way with each bite he took, until the entire burger was gone. I told him so, and he didn’t understand what I meant because there were no mirrors.

We started looking around, watching others eat, and realized that every other guy in the entire dining area was eating their burgers the exact same way! Deranged carnivores. It was hilarious. He got to see what he was doing himself and laughed. Ever since then I call that look the ‘burger face.’

I bet if you watched your male companion next time you eat a burger, you will see him doing the exact same thing. Luckily, I didn’t catch any women doing this. Seriously, do guys know they look that psycho when they eat a burger?”

Congratulations, Lisa! You’ll want to know that Meat Boy, who picked your entry above all the others because it made him laugh so much, says you’ve inspired him to try a 4×4 now. He adds that if you and your husband are ever in his hometown of Sacramento, there are two bodacious burgers you must try that he has yet to: The #4 (a 1-pound burger known as the “Football”) at Ford’s Real Hamburgers; and the “Quad” (four patties) at Nationwide Freezer Meats.

To claim your prize: Lisa, please send me an email (use the “Contact Food Gal” link on the right rail), with the subject line “Morton’s Winner,” along with your full name, email, and mailing address.