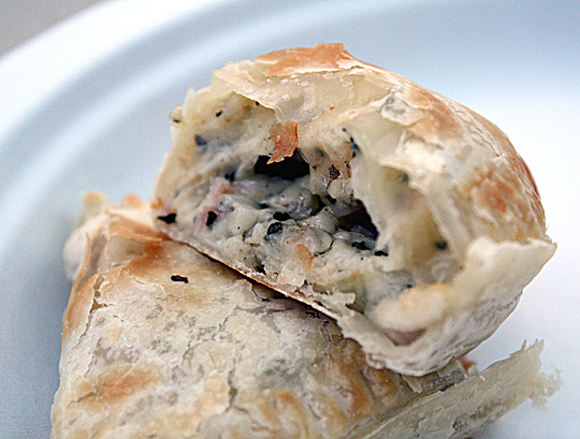 The Mmoon is rising in downtown San Jose.

That would be the Mmoon empanada cafe to be exact.

Two brothers from Argentina — one who worked in financial services, the other in business ventures — are opening their first restaurant Sept. 13 in what was the old Emma’s taqueria on W. Santa Clara St.

Yes, more empanadas, which seem to be popping up with such regularity in the Bay Area now, that they might soon give the cupcake craze a run for its money. Mike Mendez, however, got the idea for this long ago. In fact, while he was still in college, he banged out the business plan for it — on a typewriter no less. Remember those?

It seemed a good idea to him back in 1980 and even more so in today’s long suffering economy. “It’s fast and affordable,” says Mendez, 52 of Los Altos. “People need something like that.”

Nine empanadas ($1.90 to $2.35 each, depending on the variety) will be offered at this fast, casual spot, where you order at the counter. Some are based on family recipes. Others are newfangled concoctions, such as the addicting “Banapple,” a half-moon pastry dusted with powdered sugar and filled with chunks of apples and bananas, sauteed in butter, brown sugar and maple syrup.

Last week, I got a chance to sample a few of the empanadas at an invitation-only preview party.

The four-inch empanadas have a buttery, flaky, pastry-like crust. In fact, after many failed attempts at creating their own dough, the brothers decided to import the frozen dough directly from Argentina instead.

“We tried. I was covered in flour. But we just couldn’t get it as flaky,” Mendez says. “So if something works, why try to change it?” 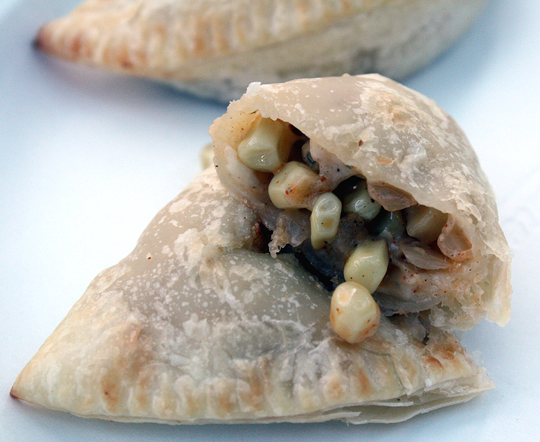 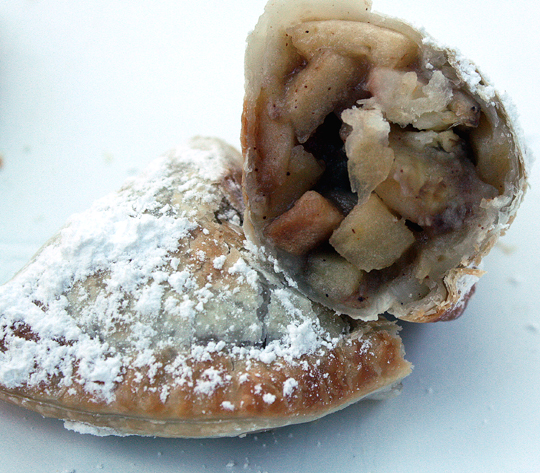 The satisfying ham and cheese one has a nice hit of black pepper. The corn-filled empanada has a subtle sweetness alongside gooey cheese. Although satiating, it’s probably the least complex tasting of the ones I tasted.

The pizza one, enclosed around a filling of pepperoni, sausage, tomato and cheese, reminded me of a party hors d’oeuvre. Fun, in a different way.

The beef tri-tip one had a wonderful piquant quality from the olives and tomatoes in the mix of ground beef, provolone and hard-boiled egg. The Mmoon makes its own dipping sauces, too. The tangy, orange-hued chimichurri sauce loaded with parsley is a natural with the beef empanada. 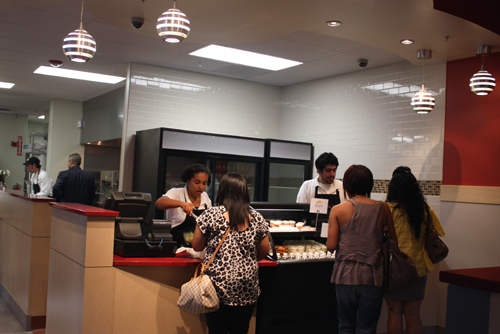 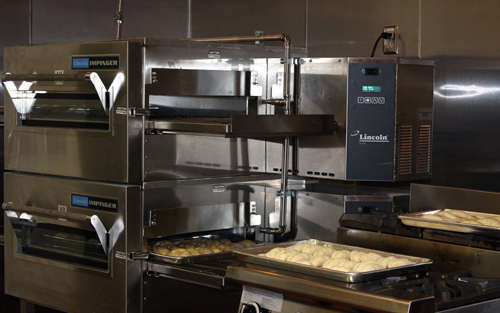 The bright cafe has a built-in social networking component. Three flat screens are mounted on a wall, each powered by a Mac. One screen has a real-time Twitter feed for those who follow the Mmoon. Another screen features a rotating montage of digital art by local artists. And the last screen pulsates with colorful, abstract images to the beat of music.

Mendez hopes that the  San Jose cafe, which will offer delivery to nearby business offices, will be the first of many Mmoons to come.

The name is a play on the double “M” initials both brothers share, as well as an aside to the “mm” noise we all make when something tastes good.

Don’t worry about stumbling over the name, though. It’s pronounced just like you would the cratered celestial body we only wish was made of cheese. 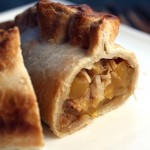