A Visit to the California Vineyard Nearest to the Pacific Ocean 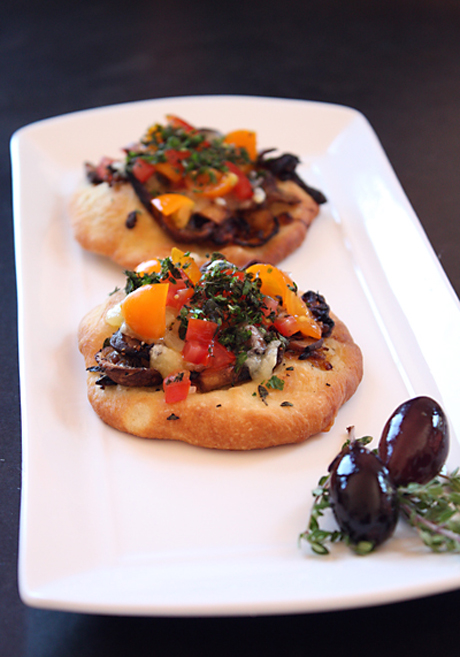 Last month after three years in the making, Fort Ross Vineyard opened the doors to its brand-new tasting room in Jenner — less than a mile from the Pacific Ocean.

That also makes it the only tasting room in the newly established Fort Ross-Seaview AVA on the Sonoma Coast that was approved late last year.

It’s an appropriate location for it, given that Fort Ross, a historic Russian settlement, was where the first grapes were planted in Northern California in 1817.

Husband-and-wife, Lester and Linda Schwartz, who met as students at the University of Cape Town in South Africa, started their Fort Ross Vineyard 12 years ago. The winery produces Chardonnay, Pinot Noir, and the signature varietal from the Schwartz’s native land of South Africa, Pinotage. Indeed, it’s one of the few producers of Pinotage in the United States.

All in all, they produce 5,000 cases in total annually. Their winemaker is the acclaimed Jeff Pisoni. The first vintage by Pisoni, the 2009 Fort Ross Vineyard Chardonnay was chosen as one of the top 100 wines of 2011 by Wine Enthusiast. 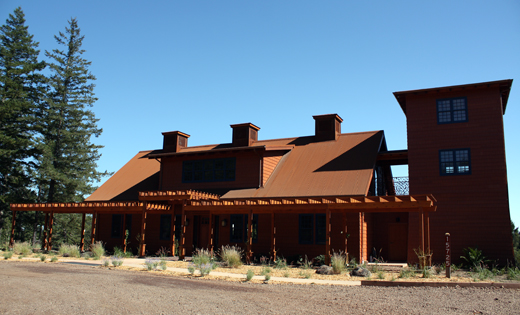 A few weeks ago, I had the pleasure of sitting down with the Schwartzs in the new tasting room, set amid redwood forests and boasting views of the ocean. Their personal story is as intriguing as their wines. The couple fled South Africa 40 years ago because of the political unrest during the apartheid era. They settled in the Bay Area. Linda was a pianist and classical music composer. Lester became the first South African licensed to practice law in California.

He happened to be driving up this hilly area one day when he spotted the property and just fell in love with it.

Having grown up on a farm and having an uncle with a vineyard, Lester wasn’t a stranger to wine-making. With his 50 acres located between 1,200 and 1,700 feet above sea level — above the fog line but in the sunshine — he thought he could grow grapes here, even if others doubted it could be done.

He proved them wrong. Their grapes are now all estate grown on 30 distinct blocks. Every vine is netted to protect it from the birds. Lester jokes, “It’s the world’s largest hairnet.” 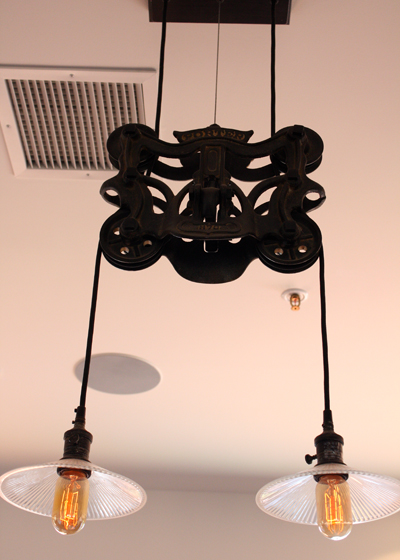 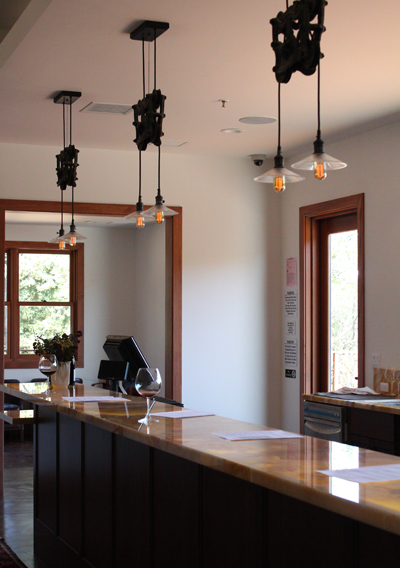 Surrounded by Madrone trees, the tasting room has an industrial chic vibe inside with its concrete floors. There’s a long onyx bar that can be illuminated from underneath and is lighted from above by pendants on heavy metal pulleys. Outside, the patio is enclosed by a handmade wrought iron railing that depicts grapevines. Energy efficient, the building also has solar panels, double-paned windows, extra insulation, high ceilings and large windows for cross ventilation so that air conditioning isn’t needed. 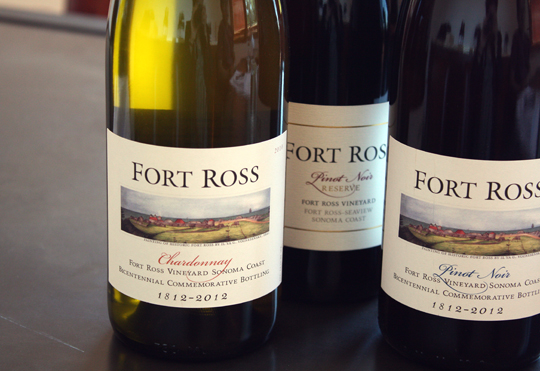 There’s a commercial kitchen on the premises, manned by Chef Lorin Dewees, who prepares the food for wine pairings that are by reservation only. If you can plan ahead, it’s highly worth trying and a fun way to enjoy the wine tastings. The offerings might include a silky corn custard to enjoy with a 2009 Chardonnay, crisp vegetable flatbreads to go with Pinot Noir, lamb meatballs in a Pinot Noir reduction, and Vietnamese-style poached shrimp to pair surprisingly with Pinotage. 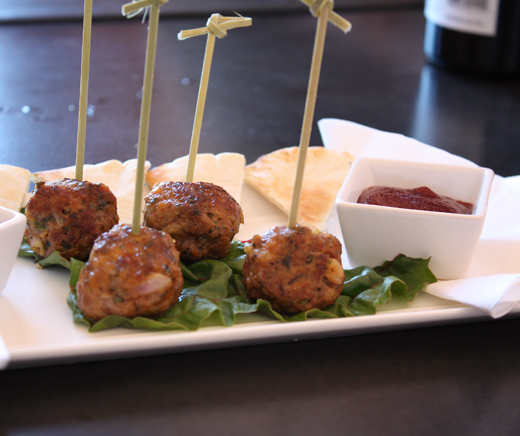 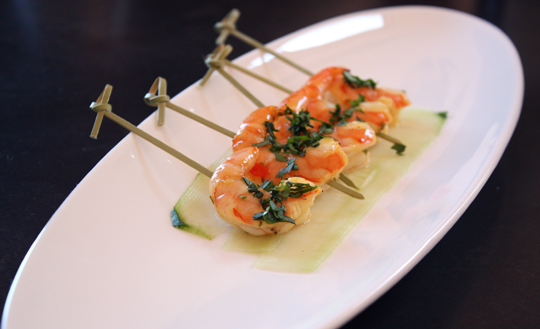 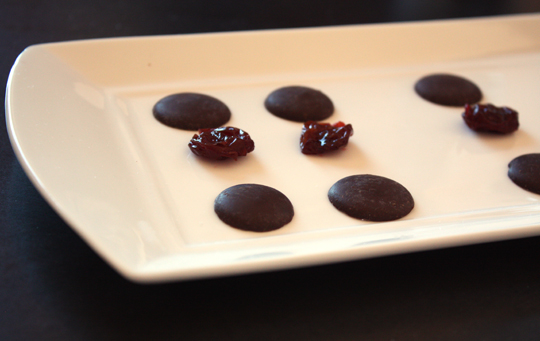 The couple decided to devote two acres to Pinotage not only because it’s part of their heritage, but for the sheer challenge of trying to make a wine that Linda jokes “is known as the Brussels sprouts of wine varietals.”

Pinotage, a deep red and extremely earthy wine, doesn’t always get a lot of love because it often has a characteristic aroma of nail polish remover, paint or even burned rubber.

Because the grape’s skin is so tannic, Linda says it took years to learn to make the wine so that “It didn’t take the enamel off your teeth.”

They learned to lessen the tannin by punching down the grapes less often — once every 36 hours as opposed to originally doing it three times a day.

The results are Pinotage that’s more subtle. I preferred the older vintages over the younger ones, which still had a whisper of that acetone note. The older Pinotages still showed plenty of fruit with a brambly character, but were more rounded overall. If you’re new to Pinotage, you can take a baby step by trying the winery’s 2009 Pinot Noir Symposium, which contains 3 percent Pinotage. It makes for a deep, dark luscious Pinot with a full body.

Look for Fort Ross Vineyard’s wines at such top San Francisco restaurants as Boulevard, Quince and Gary Danko, and in the Napa Valley at Tra Vigne and La Toque.

Or take a drive to the tasting room, open every day generally from 10 a.m. to 6 p.m., to visit a uniquely situated winery you won’t soon forget. 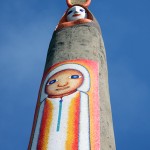 More: A Visit to Neighboring Timber Cove Inn on the Sonoma Coast