An Elegant Taste of Sri Lankan Food in San Francisco

1601 Bar & Kitchen resides in a transitional part of San Francisco.

It’s right near a major freeway on-ramp to Highway 101. And as you sit at a table by the window, you might spy a homeless person or two rifling through nearby dumpsters.

But none of that should dissuade you from trying Executive Chef-Owner Brian Fernando’s captivating take on Sri Lankan food.

Fernando is of Sri Lankan heritage, so he knows the warm, earthy, sometimes fiery flavors of this Indian Ocean island well. His French training shows through, too, as the presentations are beautiful, from what I evidenced on a recent visit when I was invited in a guest of the restaurant. Fernandez honed his skills in tapas bars in Spain, followed by a stint at Chez Panisse in Berkeley before going on to Le Papillon in San Jose.

The bright space with soaring ceilings is done up in shabby-chic with weathered bar stools and a large, striking mixed-media art piece of Abraham Lincoln hanging on one wall. 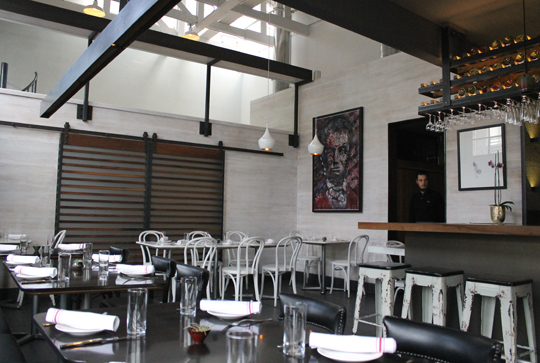 The restaurant offers up small plates to share, with lighter ones listed at the top of the menu and heavier ones at the bottom.

Tender pieces  of poached Portuguese octopus ($11) get kicked up with a scoop of iced heirloom tomato chutney that’s like a frozen Bloody Mary. It’s quite spicy, adding a real punch to the dish. 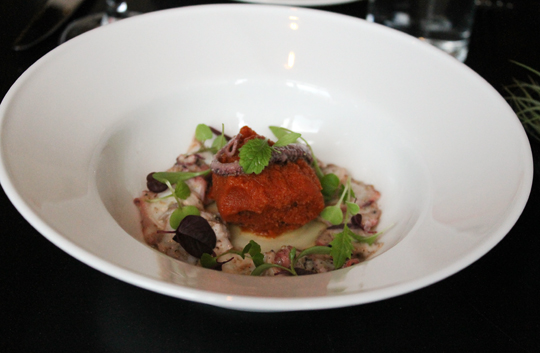 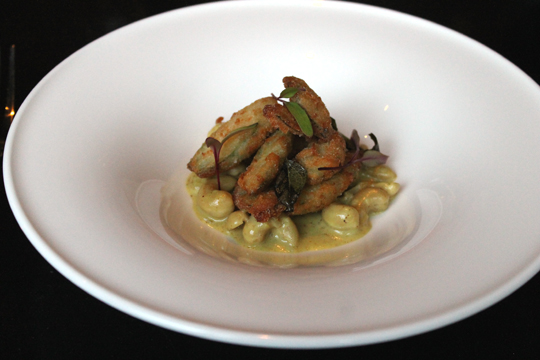 Crispy okra ($8) have the lightest of coatings and come piled atop a puddle of cashew curry with pieces of whole cashews in it.

A must-order is the Traditional Hopper ($9), a rendition of the popular staple in Sri Lanka. It’s a rice flour-coconut milk crepe cooked in a hot, wok-like pan to give it a bowl-like shape. It’s impossibly thin and delicate with an almost lacy look. A soft-cooked egg resides in the center. On the side, there are chile, coconut and tamarind sambols to add to your liking. It’s breakfast for dinner that’s not to be missed. 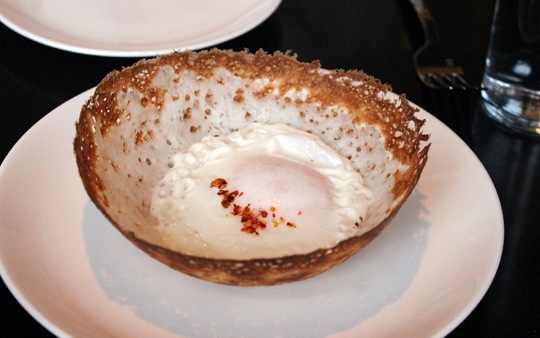 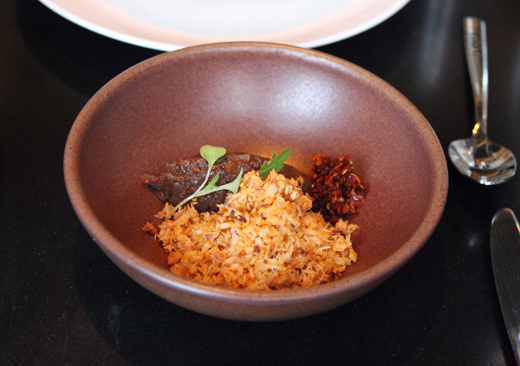 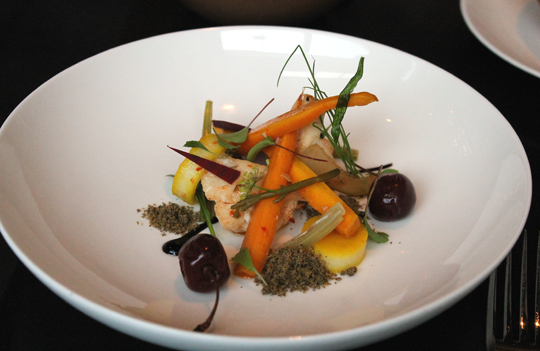 Not your average pickle plate.

You also can order a Sri Lankan pickle plate ($8) to go with everything.  From carrots to fennel to cauliflower to whole stemmed Bing cherries, it’s all lovingly arranged. Buckwheat ”dust” adds a delightful nuttiness and a soothing touch to the extremely sharp pickles.

Fried fingerling potatoes ($7) are crisp on the outside, creamy within and addictive with its salty, tangy coating of chile-fenugreek vinegar and Maldive fish. Who can resist crisp potatoes? 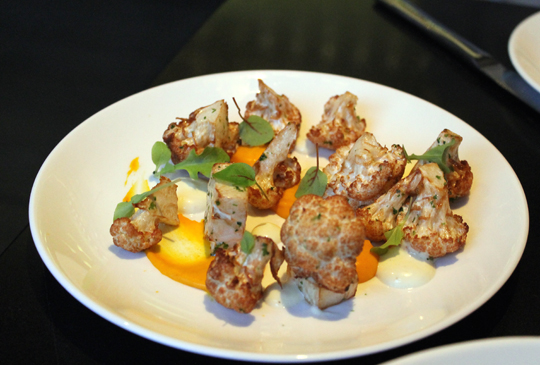 Next, one of my favorite dishes of the night: roasted squab ($18) with star anise, plump blackberries and forbidden rice. Squab is unforgiving. Cook it one minute too long and it’s tough and livery. Cook it too little and it can be slimy. This one was perfect — moist, tender and with that mouth-watering gaminess. The sauce was made with the squab liver to add even more intensity. 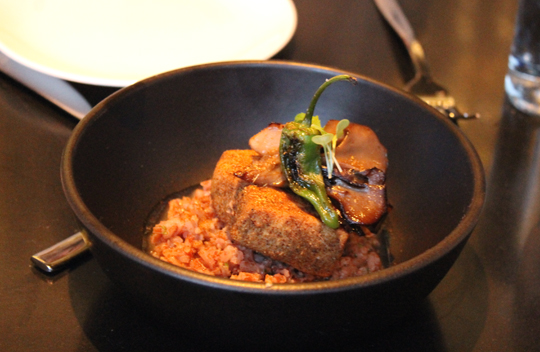 That was in contrast to what was probably my least favorite dish: braised sturgeon ($18). The black curry was flavorful. But the sturgeon had taken on an unpleasant cottony texture and the red basmati rice underneath tasted slightly undercooked.

For dessert, there are only three choices on the compact menu. The chef was kind enough to give us a smaller portion of the banana fritters ($8) just so we could try it. Rather than crisp, though, the fritters were almost bready soft like French toast. The best part of the dish were the slices of fresh banana that had been bruleed, giving them a crackling burnt caramel taste. 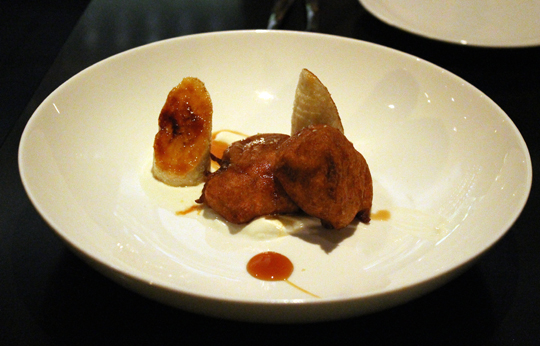 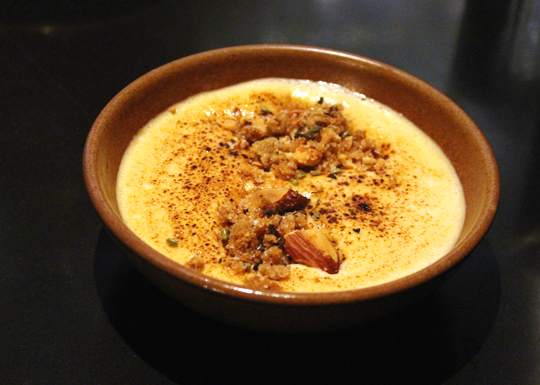 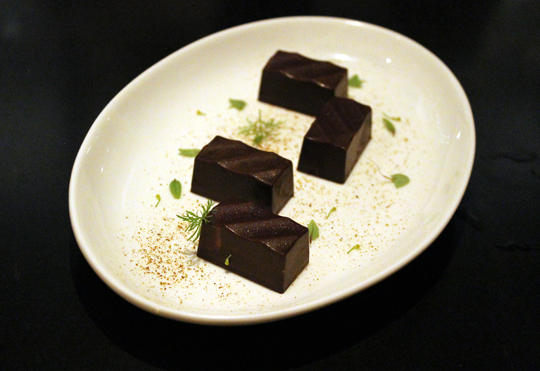 A Ceylon tea semifreddo with almond streusel ($8) was imbued with the flavors of anise, cinnamon and black tea. Although semifreddo is usually frozen firm, this one was more like of a melting soft-serve consistency. Good thing it came in a bowl to make eating easier.

Afterward, there are little truffles to enjoy. Made with Valrhona dark chocolate, the super smooth ganache carries the surprise of curry. Although my dining companion thought the spices too strong, I enjoyed the way the earthy jolt of cumin married with the slightly bitter chocolate.

Whether you’ve tried Sri Lankan food or have never experienced it before, 1601 Bar & Kitchen beckons as a welcoming ambassador of this spice route cuisine. 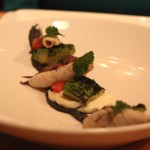 Another San Francisco Restaurant in A Sketchy Locale Worth Seeking Out: AQ