You’d Be Wise To Stop In At Wise Sons Wise Sons chocolate babka to make you weak in the knees.

I did not grow up in New York. But I can still appreciate a good bagel, nevertheless.

A native San Franciscan, I found my standard bearer to be the home-grown House of Bagels.

While there has been a proliferation of bagel chains lately, too many disappoint. Ginormous bread bombs, bagels should not be.

Wise Sons of San Francisco, however, is an exception. Its bagel bakery opened at 1520 Fillmore St. in January. And it is the real-deal.

They make them in the wee hours of the night, the time-honored way by boiling them before baking them.

I was invited in as a guest to sample them recently. What a treat to bite into a regular-sized bagel with a bronzed shell that gives way to a dense interior with a good hefty chew to it. There are six varieties: Everything, Sesame, Poppy, Salt, Plain, and the Bialy, the bagel’s close, flatter cousin that is not boiled, just baked. They sell for $2 each or $10 for half a dozen or $18 for a dozen.

You can create your own bagel sandwich with the various shmears offered, such as house preserves ($3.50), cheddar shmear ($4) or house-made hummus ($4). Or order one of the preset bagel sandwiches, which is what I did, opting for the Smoked Trout Salad ($9). Wise Sons not only smokes its own trout, but makes its own mayo, too. It’s smeared on a sesame bagel and stacked with butter lettuce and watermelon radish. You can opt to get any bagel sandwich “dragged through the garden” for an additional $2. That means you get an additional layer of “hippie greens mix,” along with cucumber, pickled onion and more radish.

It makes for a mouthful. A very satisfying one at that. The smoked trout is just a little salty and rich. The proliferation of fresh veggies and lettuce helps counterbalance that. And the sesame bagel adds just a touch of sweet nuttiness. I told myself I was going to only eat half, and save the rest for later. But of course, that plan went out the window upon my first bite. 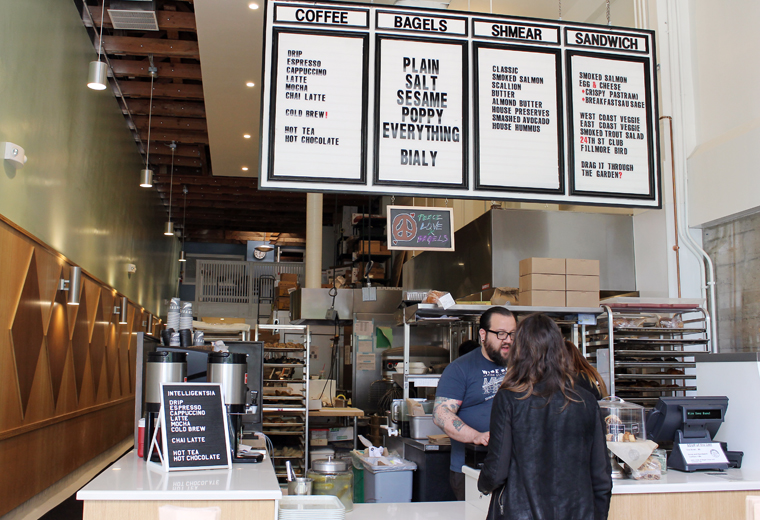 Order at the counter. 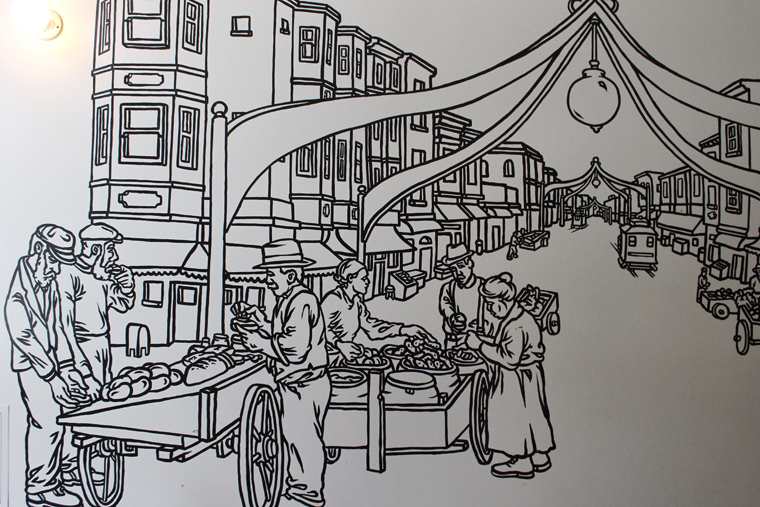 The fun mural on the side wall inside.

Wise Sons also bakes assorted breads such as Jewish rye ($7) and challah ($6). But what you must have is definitely the babka ($4 for a slice; $12 for a half loaf), which comes in either chocolate or cinnamon. 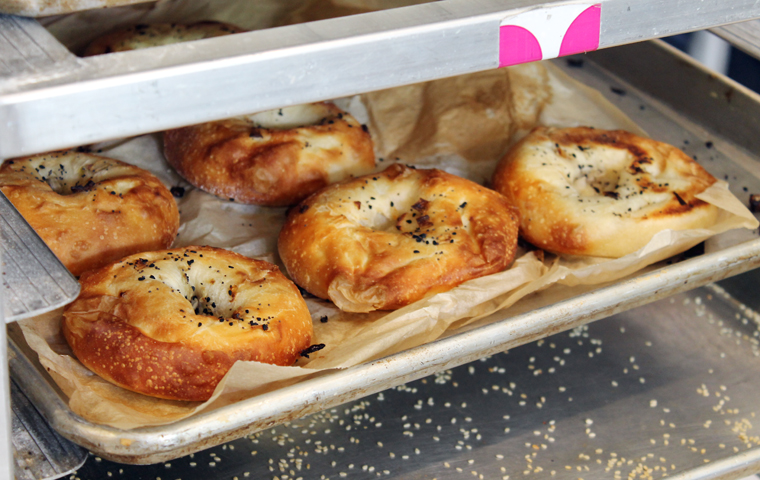 Bialys fresh out of the oven.

Being the chocoholic that I am, I fell hard for the chocolate babka. It’s a tall and regal  thick slice cut in half vertically to give it presence. Unlike other babkas that have only a couple of swirls of chocolate in it, this one is an intricate maze of chocolate inside. It’s a soft, sturdy, yeasty tasting bread transformed into decadent dessert.

This is not the place for those on a no-carb diet. It is a place to carbo load with no-holds-bar joy.