Step Inside The Vault The seafood sampler at The Vault.

The iconic Bank of America skyscraper in San Francisco’s Financial District holds a special place in my heart.

It’s where my Mom worked for years at a brokerage firm. And it’s where I’d work high school and college summers in her office for her boss, sorting and filing papers. The company was located on the 32nd floor, high up enough that when the Blue Angels were in town, you could gawk at the planes — and feel a rumble — as they whizzed by the windows practically at eye level. Now, that was something.

It’s been many years since I’ve been back inside that building. But recently, I had the chance, when I was invited in to dine as a guest at the new The Vault, located on the concourse level.

The newest concept by the Hi Neighbor Hospitality Group, it is also quite something to behold. The restaurant group may be known for its relaxed, neighborhood spots — Trestle, Corridor, and Fat Angel — but The Vault, which really is in the bank’s old vault area, is total swank. The place where power people imbibe. 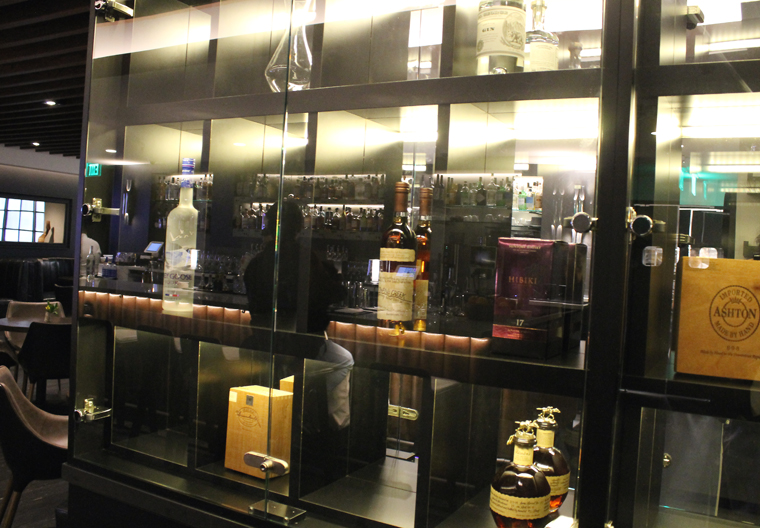 That meant a different vibe was in order. After all, the building still houses some of the top financial services firms around. While one could easily still walk in here wearing the usual skinny jeans uniform, you will see far more suit jackets and blazers than you ever would in the South of Market area.

Because it’s in the subterranean level of the building without windows, there’s a cloistered feeling to it, as if you just walked into some fancy private club. It’s all dimly lighted with masculine dark leather banquettes and plush royal blue velvet upholstered chairs. The bar and lounge area is larger than the dining room, all the better for the Morgan Stanley crowd to to take the high-speed elevators down from their office for martinis after work. There are even private lockers to hold patrons’ personal bottles of liquor. Like sister restaurant Trestle, The Vault has a huge display of fresh flowers as a focal point in the dining room. 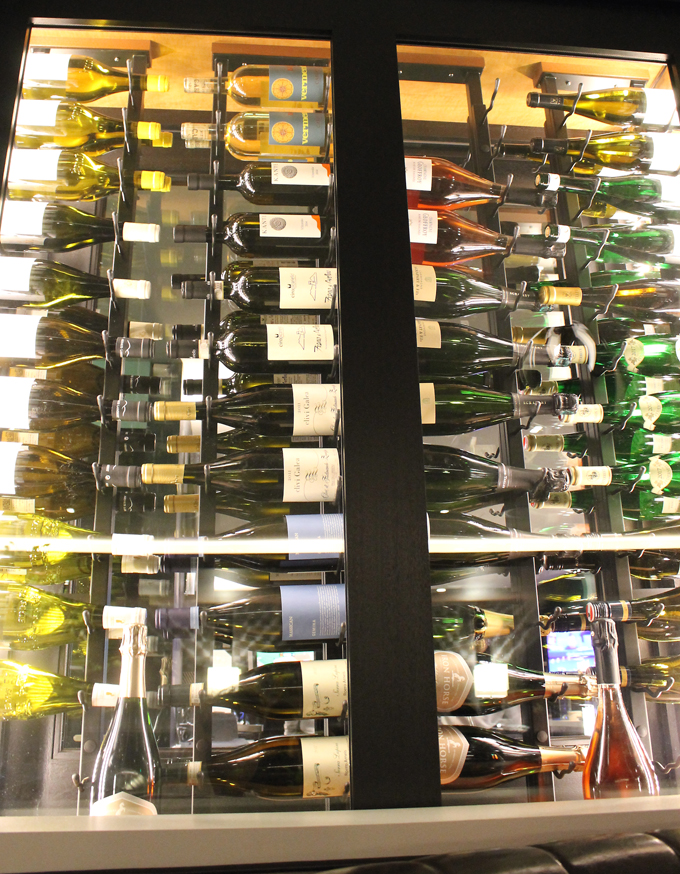 The wine cellar walls that can be seen from the dining room and the bar.

The Introspection ($13) cocktail arrives with a froth of egg white rising cleanly to the very top of the Old Fashioned glass with a garnish of a dried chrysanthemum bud at its center. The flower hints at the contents of chamomile aquavit and saffron-infused Fords gin. It’s floral, botanical, and with a touch of sweet hay from the saffron. Are you given to “Introspection”?

The Raw Platter is a deal at $38 per person — far less than other plateau de fruits de mer elsewhere. At this price, of course, you don’t get a mountain of lobster tails and other shellfish. It’s a more modest affair, but done with a lot more finesse. It essentially offers a taste of the five a la carte raw bar offerings. And it’s a perfect way to begin a night here.

On the evening we were there, that included oysters on the half shell with a bracing and grassy Meyer lemon-jalapeno granita on top; firm and fleshy halibut crudo with a peppery bite from togarashi; poached and chilled whole shrimp with horseradish sauce; plump lobster pieces tossed in green garlic aioli and preserved lemon; and a chilled egg custard or chawanmushi as silky as can be topped with smoked trout roe and lovely Ft. Bragg uni. Carrots in a range of textures and tastes. Sweet peas in the spotlight.

Star Route Farms baby carrots ($14) get a star turn when they are both roasted to utmost sweetness in log-like pieces and pickled in thin, tangy crisp rounds atop quinoa with smoked almonds and earthy ras el hanout.

Spring is personified in a dish of Riverdog Farm peas ($14) that are so tender and sweet. They’re served with pea tendrils, cubes of avocado, mozzarella and plenty of mint for a dish that’s light, delicate and airy.

Beef tartare ($17) arrives with a golden smoked egg yolk at its center that the server mixes at the table. The egg yolk takes on a subtle smokiness after being poached in oil that’s been smoked. “Cocktail powder” — a mix of dried tomato and dried horseradish dusts the plate for a touch of fun. The natural sweetness of the meat sings through, with the egg yolk adding a velvety quality. 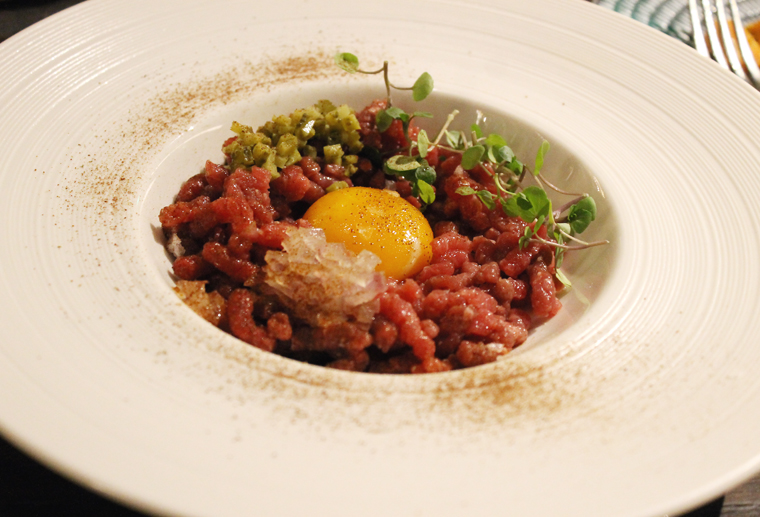 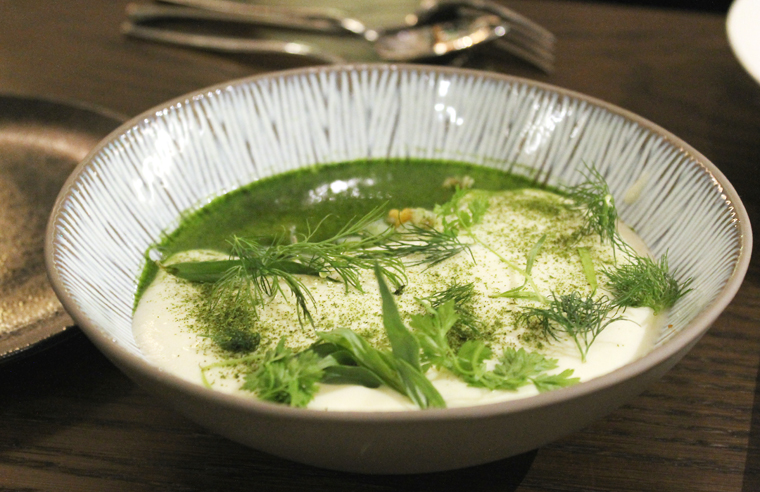 Not your typical clam chowder.

Clam “Chowder” ($15) is not the usual rendition. A clear clam broth is poured at the table over clams, creamy potato foam, crisp pieces of bacon, tiny sourdough croutons, and fronds of dill. The result is a lighter version that tastes more intensely of clams.

The Parker House rolls are every bit as fluffy and buttery as you expect. At dinner time in the dining room, an individual one comes free with every entree. At the bar, they come half a dozen to an order to encourage sharing. 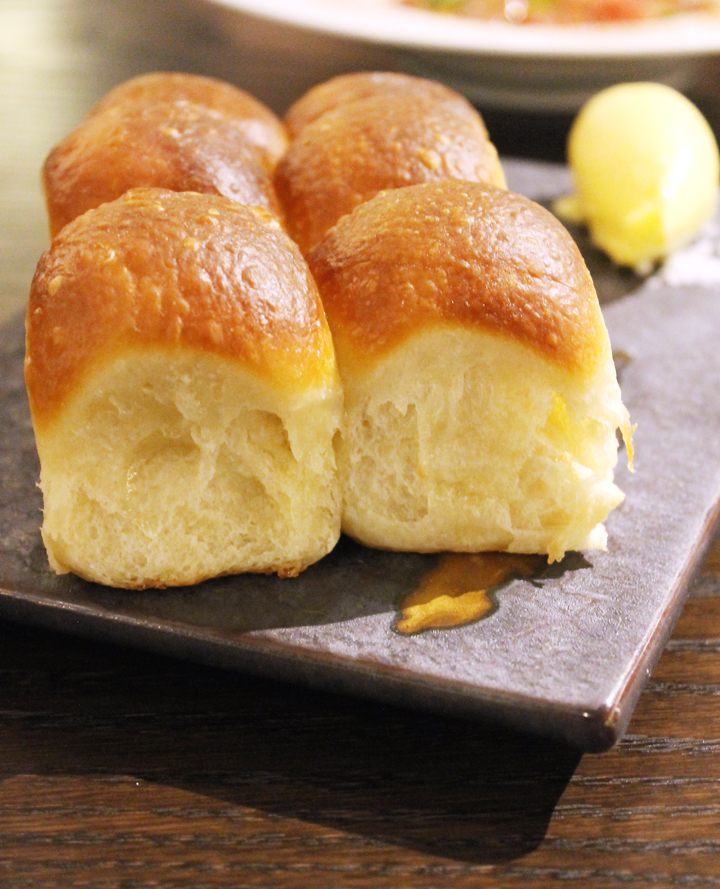 A six-pack of Parker House rolls. Chicken liver mousse to spread on those warm rolls.

Cole brought us the latter just because. And believe you me, we didn’t turn it down because this is the kind of six-pack I really lust after. Especially when it came with a side of creamy, oh-so-smooth chicken liver mousse ($14), squirted in little dabs in a dish and garnished with pert pickled mustard seeds and pickled red onions.

He also brought out for us to try a smaller serving of the Comte-stuffed tortolloni ($28), which is normally an entree. The supple pasta is made with 25 percent rye to make it more substantial. All the better to hold a near-molten filling of the nutty tasting French cow’s milk cheese. Bite into one and it gushes out a stream of liquidy gooey cheese that fills your mouth. Close your eyes, and savor pasta heaven. 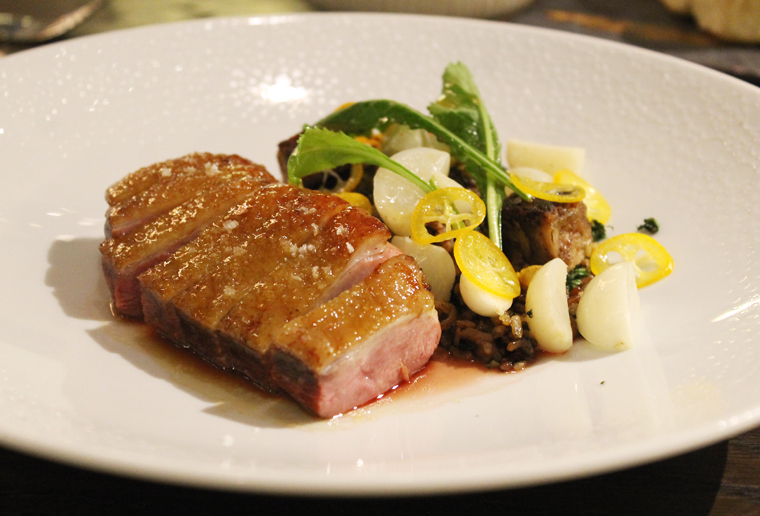 The dry-aged Liberty Farms duck breast ($38) has been a popular order. It’s sliced and served nicely medium rare, so it’s tender, toothsome and juicy. The leg meat has been cooked confit, then cut into small cubes that get wonderfully crisped in the pan. The crowning touch is the accompaniment of dirty fried rice, so named because it’s fortified with the duck liver and giblets, giving it depths of savoriness.

Pastry Chef Tara Lewis’ desserts are as delicious as they are beautiful. The yuzu mousse sphere ($12) is the way to go if you crave something citrusy and light after a big meal. The sphere is smooth, creamy mousse with the bright taste of the Japanese citrus that sits atop a butter cookie disk. Tender, juicy tasting green almonds are sliced thinly and scattered all over for an eye-catching finish. Milk chocolate cremeux with a pool of sheep’s milk.

For something richer, there’s the Jivara milk chocolate cremeux ($12) that tastes like a Toblerone milkshake incarnate. Like a thick decadent milk chocolate pudding, it gets an added luxurious touch when rich sheep’s milk is poured over it at the table. Chrysanthemum granita adds a refreshing touch, and honey comb and bee pollen up the floral notes. Last but not least, there was the gift of a small but potent glass of house-made limoncello made with Douglas fir-macerated vodka that added a scent of pine forest to the intensely citrusy liqueur. 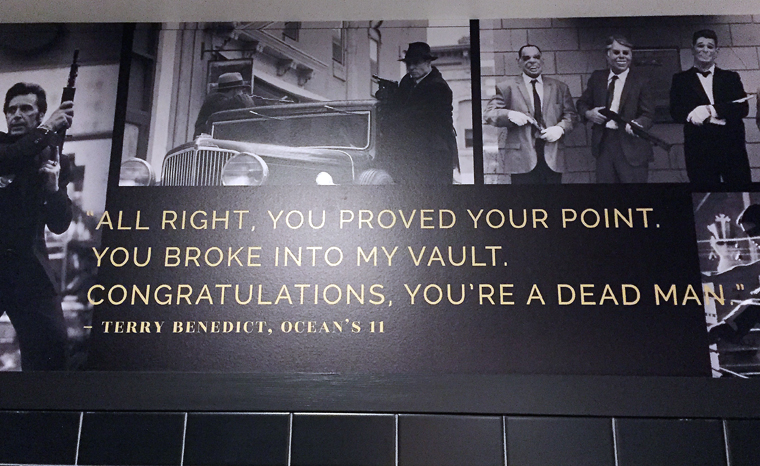 Even the bathroom decor is in keeping with the theme of the restaurant.

The Vault has managed to unlock the tricky combination of glamour and upscale comfort that makes you feel like you’ve had a real night on the town — yet minus the pretense. 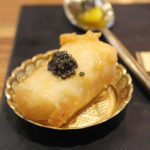 And: A Visit to Gibson