I have “The French Laundry Cookbook,” the “Bouchon Cookbook,” and the “Under Pressure” sous vide tome, all by Thomas Keller.

These oversized, coffee-table books reside in a prominent place on my bookshelf. I have leafed through them all, savoring the recipes, and lusting after each and every magnificent dish photographed so dreamily.

That is, until now.

Until a promo brochure for the upcoming “Ad Hoc At Home” (Artisan) book arrived in my mail, and I fairly ran to the kitchen to start pulling measuring spoons and bowls out of my cabinets.

I’ve had the pleasure of eating at Ad Hoc in Yountville a couple of times. I’ve always been won over by the impeccable quality of the seasonal, family-style food served at this casual eatery. It’s comfort food done with utmost fun and finesse.

Salmon tartare cornets I’ll leave to the French Laundry staff to construct. A Bouchon recipe for French onion soup that requires a half day to caramelize onions ever so slowly (I’m exaggerating, but not by much) makes my eyes glaze over. Sous vide anything makes me start to tremble.

But chocolate chip cookies? OK, this I can do. 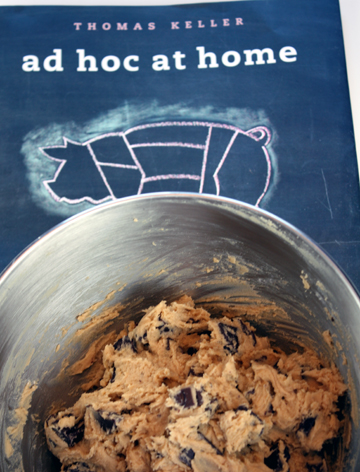 Keller acknowledges his other books might be intimidating to most of us. He goes so far as to refer to the new Ad Hoc book as “the long-awaited cookbook for the home chef.” It’s described as uncomplicated, the way Keller cooks at home — without intricate garnishes or an immersion circulator. Though, knowing him, I’m sure he cooks in the world’s most organized, uncluttered home kitchen around, with everything labeled and alphabetized, and every electrical cord neatly wound just so. He can’t help himself.

Being the cookie fiend that I am, though, it was the recipe included in full for chocolate chip cookies that got me pumped up.

With so many chocolate chip cookie recipes already out there, how could this one be any different?