When it comes to cooking, it’s the little things in life that make such a difference now — crunchy sea salt, olive oil with a real personality, and an exceptional cheese with flavor to spare that elevates anything it touches.

That’s why I felt like I had truly hit the culinary jackpot when Humboldt County’s Cypress Grove sent me samples during this just-the-basics-ma’am, hunker-down-and-make-do kind of time.

Because it’s soft-ripened goat cheeses are anything but banal. Since 1983, this Arcata, CA-based cheesemaker has been turning out award-winning wheels. Since 2017, it’s taken a fancy turn each year to its classic Humboldt Fog by making limited-edition remixes that feature herbs and spices added.

This year, Cypress Grove ups the equation by not only adding the familiar ripple of flavoring at the center of the cheese, but also mixing it into the cheese paste through and through. The result is wallop of flavor.

This year’s line-up includes the Dill Remix, which was released in April; the Chipotle Cacao that will debut in summer; and the Haze Remix due in the fall.

END_OF_DOCUMENT_TOKEN_TO_BE_REPLACED

Cheese, Please — For the Holidays Cranberry & Cinnamon goat cheese for spiffing up the holidays.

One of the easiest — and tastiest — no-fuss treats for holiday entertaining is cheese.

Just unwrap, arrange prettily with crackers, baguette slices, and maybe some toasted nuts and dried fruit, and you are good to go.

Laura Chenel, the pioneer in artisan goat cheese in Northern California, makes doing so especially festive with her flavored ones. Recently, I had a chance to try a couple samples that are particularly perfect at this time of year.

Her new Cranberry & Cinnamon Medallion is new this year. The 3.5-ounce thick round disk ($3.99) is naturally tangy from the goat cheese, but with a touch of fruity sweetness and warmth from the dried cranberries and touch of cinnamon.

END_OF_DOCUMENT_TOKEN_TO_BE_REPLACED 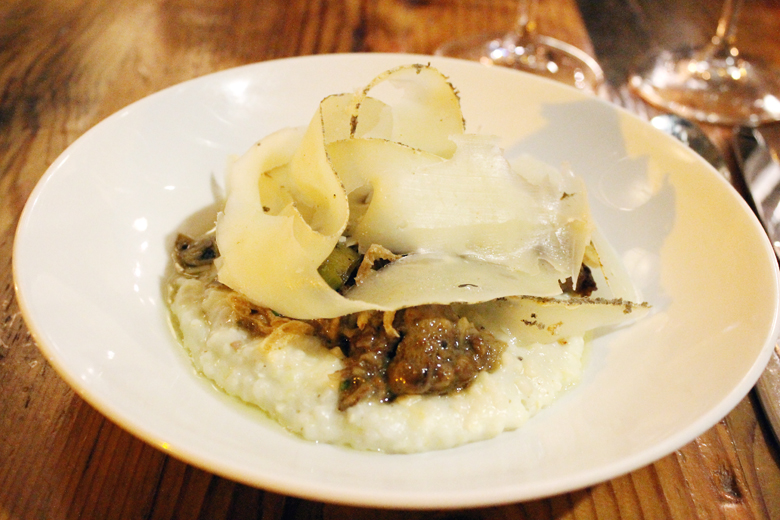 Ribbons of Bohemian Creamery’s Capriago cheese cover the top of mushroom-pork ragout with grits at The Table.

Last week, San Jose’s The Table was transformed into the cheese table.

The popular Willow Glen neighborhood restaurant hosted its inaugural cheese dinner. This one spotlighted the cheeses of Bohemian Creamery of Sebastapol in a $75 seven-course dinner that included paired beverages. I was lucky enough to be invited in as a guest of the restaurant, which plans to make the cheese dinner an annual event.

Owner and cheesemaker Lisa Gottreich was on hand to talk about her hand-made cheeses, which are sold at retailers such as the Cheese Board in Berkeley and Sunshine Foods in St. Helena, and featured at restaurants such as Ad Hoc in Yountville, Chez Panisse in Berkeley, Nopa in San Francisco and SPQR in San Francisco.

Gottreich makes her 13 types of cheeses the Italian-way, with little salt. The goat cheeses are made with milk from her own herd of goats. The other types of milk that go into her cheeses are purchased from nearby farms. In the far right, Chef-Owner Jim Stump greets cheesemaker Lisa Bottreich in the dining room of The Table. The kitchen at work with Chef “AJ” Jmenez in the baseball cap.

The first course brought her Bodacious five-day-old goat cheese with a bloomy rind in a spring dish of asparagus and Oro Blanco grapefruit that was paired with Sikyo “Mirror of Truth” Takehara Junmai sake. What a great way to start with a creamy, tangy cheese and a floral, clean sake that worked well with the always tricky-to-pair asparagus.