It’s a good bet that Guillermo Soto Torres is one of the few — if not only — pastry chefs in the Bay Area with a degree in telematics, the interdisciplinary field that combines telecommunications, vehicular technologies, electrical engineering, and computer science.

He had hardly stepped foot into that scientific career, though, when he made a major pivot to use his knack for precision in a whole different way. He started working in a chocolate shop in his native Mexico, then began studying baking books. It wasn’t long before he jumped full bore into pastry making about 15 years ago.

That led to stints at Four Seasons hotels in Costa Rica and Florida, before coming two years ago to the Four Seasons Silicon Valley in East Palo Alto to become head pastry chef.

Earlier this week, the 36-year-old chef invited me and two other media colleagues into his hotel kitchen to watch and learn as he made what will be the stunning centerpiece dessert for Christmas Eve dinner and the Christmas Day buffet — the buche de Noel.

His version of the classic French yule log cake is comprised of a flourless chocolate cake on a base of crispy hazelnut feuilletine (crunchy crepe shards) that’s rolled around chestnut cream and an anise-flavored orange compote before it’s all enrobed in shiny white chocolate glaze and holiday garnishes. To serve all the expected guests on those two days, he will make 100 of them.

He talked about his favorite ingredient to work with, the one that’s he’s allergic to, the one dessert he could eat every single day, and the rather ill-fated day that he began working at the Silicon Valley hotel.

END_OF_DOCUMENT_TOKEN_TO_BE_REPLACED

With festive string lights overhead, holiday trees everywhere, a sleek fire pit blazing away, and even a seemingly light dusting of snow falling, one of my best friends and I recently spent a relaxing winter getaway — without actually really trekking anywhere beyond Silicon Valley.

That’s because the second annual winter pop-up at the Four Seasons Hotel Silicon Valley in East Palo Alto is so incredibly transportive that you will feel like you’re on holiday, fresh off the slopes at Whistler or Banff in British Columbia.

The Après Village is set up on the terrace of Quattro, the hotel’s signature restaurant. It’s open from now through Feb. 26, from 4 p.m. to 9 p.m. Fridays and Saturdays. Mondays through Thursdays, it’s available for private bookings.

The spot is truly a sight to behold, as I found when I was invited in as a guest last week.

The Après Village is fashioned into its own separate space, complete with a Sweet Shoppe at one end that’s modeled after a European Christmas market stall, where you can purchase Pastry Chef Guillermo Soto’s truffles, macarons, signature chocolate bars, and freshly made doughnuts.

END_OF_DOCUMENT_TOKEN_TO_BE_REPLACED 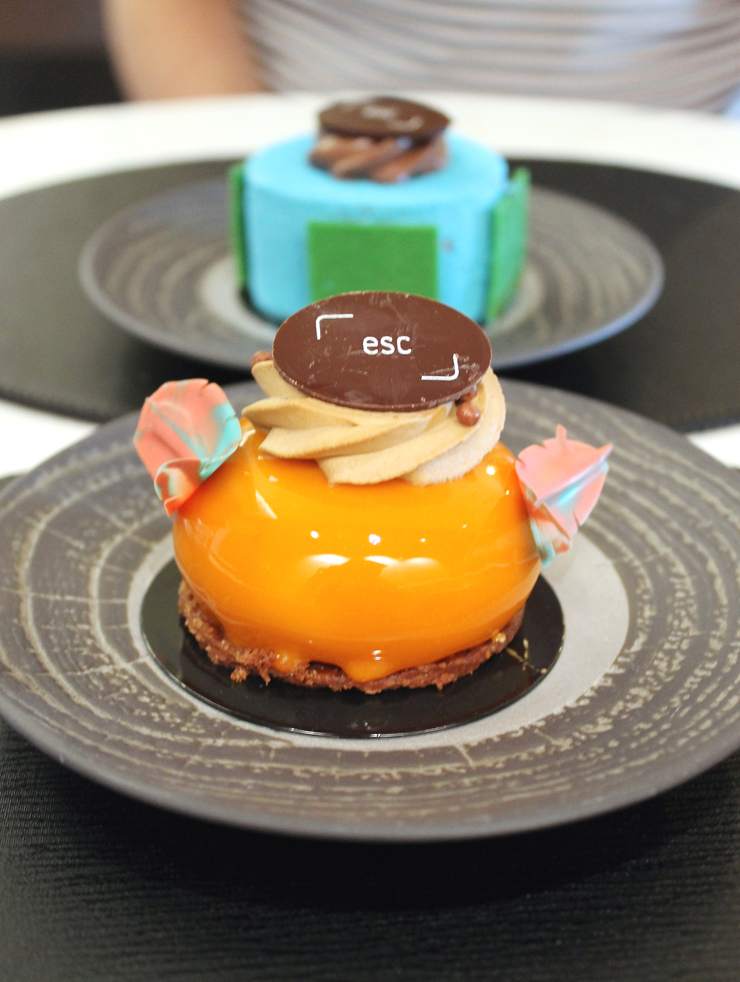 Escape to esc for this incredible dessert.

Normally when we think of the esc button on our computers, it’s not with fondness or pleasure. It’s usually characterized by banging on the button out of frustration because our screen has frozen.

But there’s another esc in town now, one that’s sure to leave you mellow and chill.

It’s the name of the new lobby lounge wine bar/cafe at the Four Seasons Silicon Valley in East Palo Alto.

If you’re used to hotel lobbies being places you only hang out in to kill time before check-in or check-out, esc will surprise you with its comfortable mix of plush couches, upholstered easy chairs, and bar stools.

I had a chance to check it out last week, when I was invited in as a guest of the hotel to see the newly completed space. 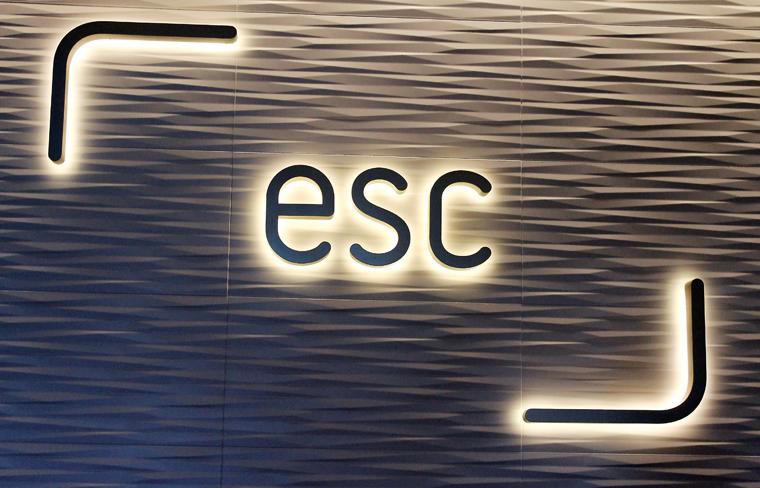 Illuminated on the wall. Take a load off in the newly revamped lobby lounge.

On a laid-back weeknight, people were working on laptops, and relaxing with glasses of wine, a few of which conveniently come in your choice of 2-, 4- or 6-ounce pours. You can even try Blend 122, the hotel’s new signature red wine by Byington Vineyards of Santa Cruz, a rich, robust sip that opens up as it sits in the glass.