Where I’ve Been Getting Takeout of Late, Part 25

If you’re sometimes at a loss as to what exactly to order for takeout, Taverna in downtown Palo Alto makes it easy with its new Family Meal Menu.

Founders Thanasis Pashalidis and Hakan Bala opened this convivial Greek restaurant after working at nearby Evvia in Palo Alto. Besides a la carte options, the restaurant makes it so convenient to enjoy its Hellenic cuisine with its all-in-one meals that serve 2 or more generously.

We went with the Berkshire pork souvlaki ($55), six skewers of charred chunks of pork that were wonderfully tender, juicy and smoky tasting. Feel free to dollop the pork with a little of the sheep’s milk yogurt-cucumber tzatziki that’s so thick and creamy, and redolent of fresh dill.

The pita is flat and denser than others, without the characteristic pocket to open up. But what it does sport that others don’t (certainly not store-bought ones) is the great peppery taste of oregano.

END_OF_DOCUMENT_TOKEN_TO_BE_REPLACED

It’s All Greek at Dio Deka Well, except for the chef.

But that didn’t stop this talented chef who has cooked with David Kinch at Manresa in Los Gatos, Jeremy Fox at Ubuntu in Napa and helped in the development of the cookbook, “Mourad: New Moroccan” (Artisan) by Mourad Lahlou of Aziza in San Francisco. In fact, if you catch a rerun of “Iron Chef America” on the Food Network, you’ll spot Cattaneo in the background as one of Lahlou’s sous chefs in his battle.

Because of the similarities between Moroccan and Greek cuisines, Cattaneo felt comfortable enough stepping into this challenging role. Plus, it helped that he studied every Greek cookbook he could get his hands on.

He doesn’t consider what he does at Dio Deka traditional Greek food by any means. But after getting a chance to experience his food as a recent guest of the restaurant, I can attest that it’s downright delicious and inspired, nevertheless. 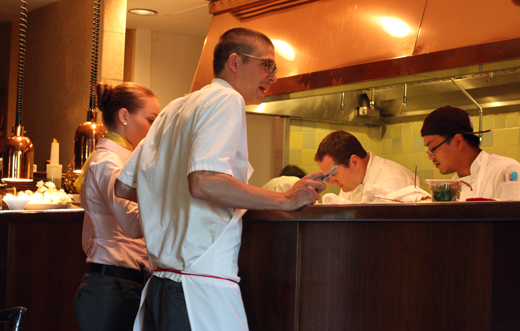 After weathering a few chef changes over the past five years, Dio Deka remains as popular as ever. Even on a Wednesday night, the dining room was packed. There were even two private parties going on at the same time. Located in the Hotel Los Gatos, it’s a loud, lively restaurant, but with quiet, subtle touches like the fresh rosemary sprig tucked into your napkin at the table.