Not the scorching inferno down the throat type.

Only, this happens to be golden, viscous mustard oil.

It offers a similar kick in the nostrils, but also has a sharpness and nuttiness. It also has a high smoke point, making it versatile enough to use either as a finishing or cooking oil.

I had a chance to play around with it after receiving a sample of Yandilla Mustard Seed Oil ($22.95 for a 500ml bottle), made in Australia.

It bills itself as the only food-grade mustard oil in the United States that is FDA approved, thanks to its very low level of erucic acid.

END_OF_DOCUMENT_TOKEN_TO_BE_REPLACED 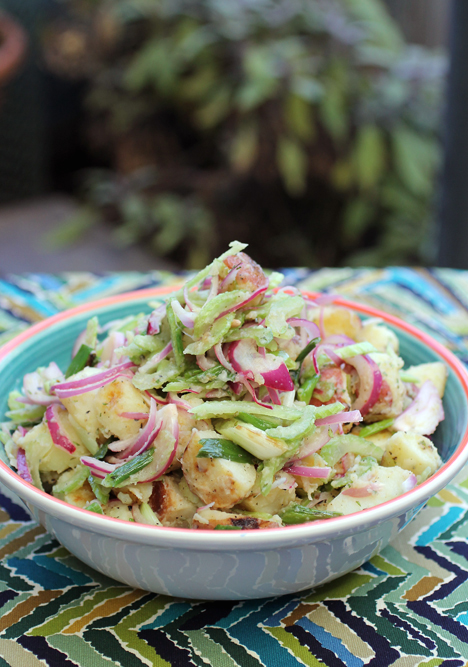 Grilled potato salad with ember-roasted garlic dressing — to put pizzazz in your Fourth of July.

In fact, cooking in embers is all the rage now at places like Saison in San Francisco, and the Restaurant at Meadowood in St. Helena.

What’s the appeal? First, the primal aspect of it all. Second, the technique makes use of the residual heat that would otherwise just dissipate and go to waste. Third, it adds a gentle yet deep smoky quality.

I thought I’d give it a try, particularly when a free copy of the new “Michael Chiarello’s Live Fire” (Chronicle Books) landed in my mailbox for reviewing. Chiarello is a major fan of live fire. Every Northern California he’s worked in or owned — Tra Vigne, Bottega and Coqueta — all feature grills with live fire. The book includes 125 recipes for cooking everything from seafood to pizza to desserts over a live fire. Of course, not many of us may have the space to cook a whole baby goat on a spitjack in our backyard, but there are plenty of recipes easily do-able even on a compact grill.