A goblet of ahi poke at Fleming’s Santa Clara.

Even more so now with the opening of the newest Fleming’s Steakhouse nearly two months ago.

Be prepared to scour the parking lot for a space if you dine here, though. That’s because the lot is surprisingly compact, given the number of businesses. And there’s no street parking nearby. One can only wonder how much more congested the place will get once Puesto restaurant opens, too.

As it is, prepare to circle around quite a bit to snag a space. We did on a weeknight, when we were invited in as a guest of the restaurant. We ended up giving in to valet parking in front of Fleming’s. It will set you back $7. You pay with your credit card, then text when you are done with dinner to have your car ready and waiting when you leave. 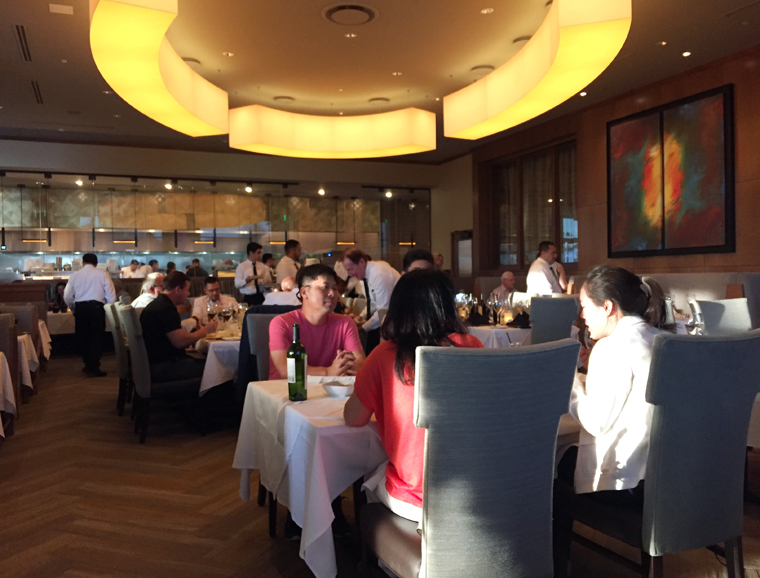 A partition of wine bottles.

It’s a handsome restaurant with a glassed-in open kitchen at the back. The dining room has large booths, and a dramatic light fixture that may make you think of a UFO. Floating shelves of wine bottles act as a partition between the bar and dining room.

END_OF_DOCUMENT_TOKEN_TO_BE_REPLACED Raised in Yorkshire, England, Executive Chef Lee Bennett was head chef at Gordon Ramsay’s Savoy Grill, worked at Alain Ducasse’s Hotel Plaza Athenee in Paris, and has cooked at events for the likes of David Beckham, and the royal family.

Now, he’s bringing his years of classical training and a bit of British sensibility to Bourbon Steak & Bourbon Pub at Levi’s Stadium in Santa Clara.

Most notably with table-side service with carts, which he hopes will distinguish Bourbon Steak from other steakhouses in the area.

“The older people remember table service and love it,” Bennett says. “And it’s so old-fashioned that Millennials have never seen it, so they think it’s cool.”

Each day, Bennett plans to feature a rotating special done table-side. It will include everything from beef Wellington or Dover sole finished table-side to bananas Foster flamed in front of diners.

Last week, I had a chance to check out the new offerings, when I was invited in as a guest of the restaurant.

Bennett took over the helm at the steak house and adjacent Bourbon Pub in January — just in time for the Super Bowl. Although his wife is American, Bennett says he was still getting the hang of football in the states, when the big game descended upon him.

“I don’t know the game too well,” he says with a chuckle. “But it was a phenomenal experience. We opened up the restaurant after the game because Beyonce, Stephen Curry and others wanted a bite to eat. It was great!”