Paula Wolfert’s “Unforgettable” Duck You Can Eat With A Spoon With crisp skin and flesh so tender you can cut it with a spoon, this duck by Paula Wolfert is a masterpiece.

She is not a star of the Food Network. She doesn’t own a four-star restaurant that has a three-month wait for reservations. And she doesn’t write pithy food articles laced with expletives and bro-talk that everyone feels the need to read, dissect, and re-post again and again.

But Paula Wolfert should be as revered and renowned as any of those folks. More so, even.

She is one of the most influential cooks of our time — a woman who has dived deep into authentic Mediterranean cuisine long before most of us ever knew what a cassoulet or tagine was.

Over the years, she published eight seminal cookbooks. But when her friend, Emily Kaiser Thelin, a former editor of Food & Wine magazine, pitched the idea of writing a biography of Wolfert, no publisher would give it the green light.

So in a modern-day version of a barn-raising, Thelin rallied her friends and colleagues to the mission, recruiting photographer Eric Wolfinger, designer Toni Tajima, and cookbook author Andrea Nguyen to do editing duties. They mounted a Kickstarter campaign, which more than 1,100 folks supported, including yours truly. 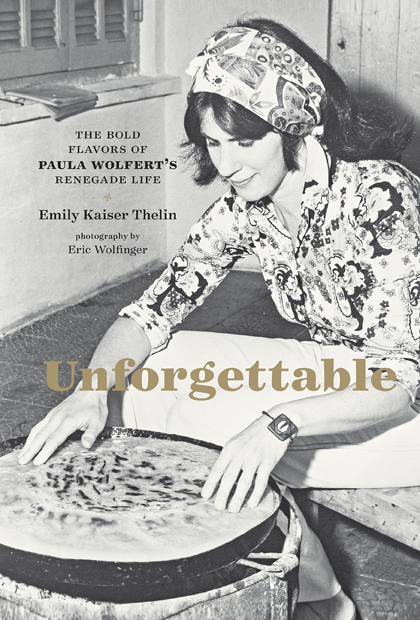 The result is “Unforgettable: The Bold Flavors of Paula Wolfert’s Renegade Life” (M&P) by Thelin.

The title has dual meanings — and hints at why Thelin and her team were so driven to put Wolfert’s life and recipes down in perpetuity. Wolfert was diagnosed with dementia in 2013. The woman who once prided herself on studying up on almost a dozen languages in order to converse with cooks around the world, now finds most of those once familiar foreign phrases elusive. Even reading in English now and retaining its contents is difficult for her.