Read What Former Google Chef Charlie Ayers Is Up To 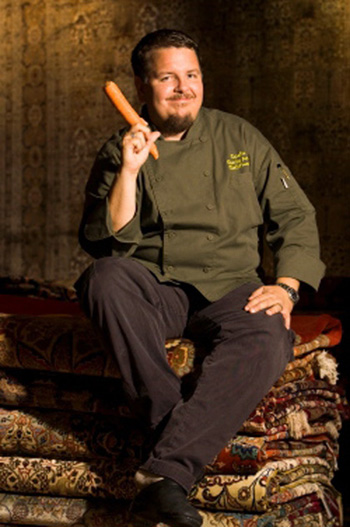 It wasn’t always easy to please his big bosses at Google in Mountain View, says Chef Charlie Ayers, who was hired as employee #53.

After all, back in 1999-2004, those guys working there weren’t exactly big-time foodies. Google co-founder Larry Page had a thing for Subway sandwiches, and for some reason, a vehement dislike of jerky. Even free-range, artisan-made, bison jerky, which Ayers learned about the hard way.

Ayers once put some out in the free-snacks area, and the engineers gorged themselves on it. But the next day, Ayers found the remainder of the jerky on his desk. “Larry didn’t want me to serve it,” Ayers says. “The only thing he said was, ‘I don’t like it.’ I thought, ‘Okayyyyy….I’ll just figure that one out on my own.”

Then there was the time he thought his bonus check had a mistake in it. He thought there were too many zeroes in it. Ayers’ bonus was tied directly to the number of employees who stayed on campus to eat. So Ayers asked his boss, who looked over the check and said, “This is correct. And if you keep doing what you’ve been doing, there will be plenty more where that came from.”

Ayers wasn’t the only one who was incredulous. His sous chef also thought the bonus check he had received must be wrong. He showed it to Ayers who deadpanned, “No, this is correct. And if you keep doing what you’ve been doing, there will be plenty more where that came from.”

Enjoy more fun with Ayers in my column, “A Girl’s Gotta Eat” in today’s Metro. Read all about his newest project, the eco-friendly Calafia Cafe and Market A Go Go in the Palo Alto Town & Country Village, which is expected to open in November.

(Note: Because the Metro is late in posting the column on its online site, the column also appears at the end of this FoodGal posting, right after the recipe.)

For those who want to turn up the heat while reading, here’s a fiery recipe from Ayers’ new cookbook,
“Food 2.0, Secrets From the Chef Who Fed Google” (DK Publishing).

Place all ingredients in a heavy pan. Add 1/2 cup water. Bring to a boil, then reduce heat, cover pan, and simmer gently, stirring occasionally, until rich and thick and the vegetables are very soft, about 45 minutes.

Puree in a blender, then pass through a strainer. Add a little more water to thin to desired consistency. Store in a clean, sealed jar in the refrigerator. Serve to fire up any of the recipes that call for chili sauce or use on tacos, crostini, wraps, or even peanut butter sandwiches!

He is the individual who may be most responsible for elevating corporate cafeteria grub to exultant, gourmet fare. But for Charlie Ayers, getting the job as the chef of Google in 1999, when the then-nascent Mountain View company had only 40 employees, almost didn’t happen.

Ayers, a former Bay Area restaurant chef and private chef to the Grateful Dead, just wrote his first cookbook, “Food 2.0, Secrets From The Chef Who Fed Google” (DK Publishing) and is working feverishly to open his new Palo Alto café by November. But he still remembers that life-changing moment when he was the last of 25 chefs to compete for the coveted Google position.

“I had read in the paper that they were having tryouts,” Ayers, 42, recalls. “It said you’d have weekends off. Well, every chef wants that.”

But Ayers left his first meeting at Google, thinking it was over before it started: “I didn’t know who Larry (Page) and Sergey (Brin) were. Larry was in shorts and a T-shirt, and he just said, ‘Hi, I’m Larry.’ He didn’t say he was the co-founder and co-owner of the company. They asked if I had cooked in Europe, as that was important to them. I haven’t even been to Europe, so I didn’t think they’d be calling me back.”

But two weeks later they did. With only two days notice, Ayers was asked to cook a meal for Page, Brin, and fellow Googlers. In his tiny apartment back then, he resorted to prepping all the food on an ironing board.

He trucked it all down to Google, and got down to work in a dirty, tiny electric kitchen. “None of the chefs who tried out before me had cleaned up afterwards,” Ayers says. “I cleaned out the refrigerator, and I put my stuff inside. Then, I cleaned up the kitchen. They were impressed by that.”

They were also impressed by the food: shrimp bisque, barley corn salad, 5-spice tofu cashew lettuce cups, Sri Lankan chicken curry with roasted pumpkin, steak-mushroom quesadillas, and a flourless chocolate almond torte. And not to mention a roasted beet salad with goat cheese crouton and cumin vinaigrette that Brin liked so much he asked for the recipe to make for a date later that week.

With that virtuoso performance, Ayers was invited to become employee #53.

He stayed almost six years, and watched as Google grew into a behemoth. His challenge was to feed the hard-working, but not very foodie-like employees delicious, healthy fare such as tofu lentil loaf, and cauliflower almond-garlic soup so that they’d come back for more. After all, his bonus was tied directly to the number of people who stayed on campus for lunch, which was _ and still is _ served at no charge to employees and their guests.

When Ayers finally departed Google, he was overseeing five sous chefs, plus a 150-member kitchen support staff, and turning out 5,000-plus meals a day. “I wasn’t cooking at that point,” he says. “”I was sitting in an office all day, looking at spreadsheets, while chefs would come in, asking me to taste things. I was gaining so much weight. It wasn’t good.”

You might think he’d never have to work again. After all, Google did compensate him exceedingly well. But Ayers says he keeps pushing himself for his own peace of mind. That’s why he’s been pouring all his energy into building his Calafia Café and Market A Go Go in the Palo Alto Town & Country Village. It’s his version of healthy fast-food, and he hopes the first of many Calafias to come. The name comes from the old Spanish name for California, which he learned _ where else _ from a woman at a Grateful Dead concert. Besides himself and one couple involved in another high-tech company, all the other investors in the $3.5 million café-bakery-market are all Google employees or former ones.

Calafia will serve rice bowls, noodle bowls, paninis, pizzas, and small plates, $4.50 to $18.50. The market and café will sell sandwiches, salads and other prepared food to grab and go, as well as Ayers’ own organic beer, Pinot Noir, and natural sodas (sorry, no Coke or Pepsi here, folks). Harried cooks also can pick up cooking kits containing such specialties as precooked lamb shank with sauce, all sealed in a plastic bag that you throw into a pot of simmering water to heat.

The restaurant is being built with reclaimed and re-purposed materials. The insulation is recycled denim.

Although he’s done one book-signing at Google, Ayers has not gone back there to eat. “It’s the past,” he explains. “I’m about the here and now, and going into the future.

“I will tell you this, though: It’s the only place I’ve worked where I’ve missed the people I worked with.”