March Your Way Over to Marché 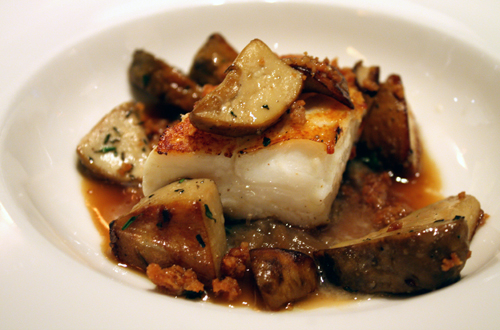 Why is it that we end up taking most for granted what’s in our own backyard?

I remember friends in Boston who’d lived there for decades but had never been to the New England Aquarium.

I know long-time residents of the South Bay who have never visited Napa.

Me? I’m a San Francisco native who has never set foot inside Coit Tower.

I think it’s the “cleaning out the garage” syndrome at work. We know it’s there. We know we have to get to it some day. But we figure we have all the time in the world to do it, so ironically, we never do.

That’s what I thought about when I sheepishly stepped foot inside of lovely Marché restaurant in downtown Menlo Park last week. The restaurant is eight years old, but this was my first time there.

I’d always heard good things about this modern French restaurant. It was on my radar to try. Some day, I always thought.

I’m glad some day finally came, when Executive Chef Guillaume Bienaimé invited me to dinner as his guest. Born in France and raised in part on the San Francisco Peninsula, Bienaimé is all of 27 years old. You’d never know it by what arrives on your plate, though. I don’t know what I was cooking when I was 27 years old, but it definitely didn’t have anywhere near the sophistication and elegance of what Bienaimé crafts.

After studying math at Foothill College in Los Altos, he turned his attention to cooking instead, enrolling in Johnson & Wales University in Rhode Island. During that time, he apprenticed at Marché, the French Laundry in Yountville, and La Mediteraneé in Paris. After graduation, he returned to Marché as a banquet sous chef, before becoming sous chef in 2006 under then-Executive Chef Howard Bulka. In April, Bienaimé stepped into the head chef position.

His love of great produce shows. Indeed, July 17-18, he will spotlight fresh corn with a $65 four-course dinner that features the likes of warm corn flan with lemon basil emulsion. 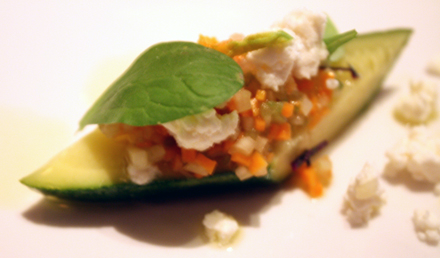 Bienaimé has a sure hand with produce, as evidenced by a first course of summer squash with French feta and red-stemmed peppermint, a wonderful way to open up the palate for what’s to come. 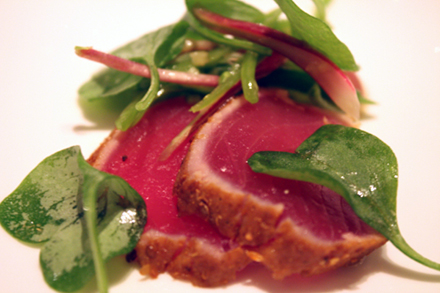 Slightly smoked rounds of tender bigeye tuna followed, crowned delicately with coriander, ginger, snap peas and baby radishes. Then, the showstopping Brentwood corn soup, with a foamed top that hid slivers of Dungeness crab. With its creamy, concentrated flavor of the freshest kernels, this is a soup that will make you appreciate soup again.

Whatever you do, don’t miss Bienaimé’s version of Alaskan halibut if it’s on the menu in this preparation with sweet, spring onion marmalade, porcinis, foie essence, and a confetti of duck cracklings. It’s a seamless, creative dish. Bienaimé says he designed it to pair with red wine, and it does so magnificently. 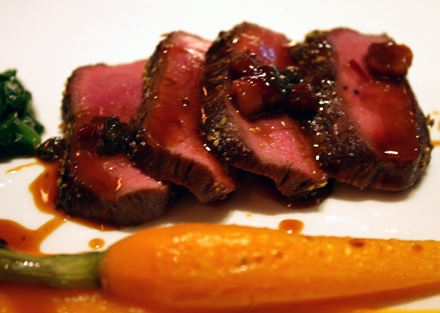 Finally, juicy lamb saddle gets crusted with dukka, an Egyptian/Moroccan/African blend of spices, nuts, and sesame seeds and served alongside a lovely pile of Bloomsdale spinach.

Pastry Chef Adrienne Garcia, just 26 years old, shares Bienaimé’s love of fresh-grown ingredients. A former intern at Manresa in Los Gatos, she has a garden plot at the Stanford Community Farm, where she grows many herbs that find their way into her desserts such as sweet basil ice cream. 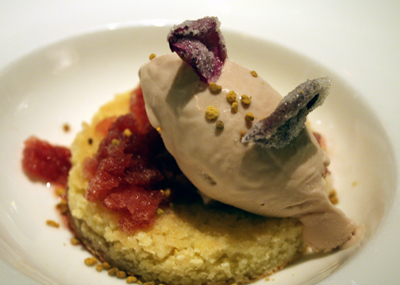 With a soft spot for anything almond, I went for the almond cake topped with tart cherry granité and rose petal ice cream. The subtle floral quality of the ice cream played beautifully with the vivid cherry notes.

Garcia also sent out a lovely apricot financier — a tender, buttery cake with a mound of fresh, caramelized, sweet apricots.

Lesson learned: Life’s too short to keep putting things off to another day.

Get thee to Marché now.