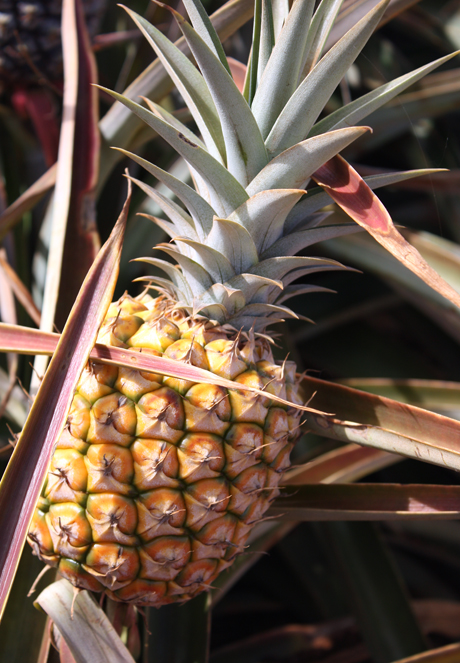 MAUI, HAWAII — Whenever I visit Hawaii, I fall head over heels — not for the sun, sand or surf, but the fruit.

I scour farmers markets for apple bananas and varieties of mangoes you never find on the mainland. I’ve even made a beeline to the frugal ABC stores for chilled papaya halves, already packaged with a wedge of lime. Because when it comes to fresh fruit in this tropical paradise, I admittedly turn rather fanatical.

So, of course, I jumped at the chance two weeks ago when I was invited to be a judge for the Maui County Agricultural Festival cook-off at Maui Tropical Plantation. In this competition,  presented by the Maui County Farm Bureau and Slow Food Maui, professional chefs were each paired with a local farmer to create a dish that showcased a particular fruit, vegetable or protein raised on Maui.

To first get a better understanding of Maui’s bounty, our hosts from the Maui Visitors & Convention Bureau, gave us a fruit tutorial. 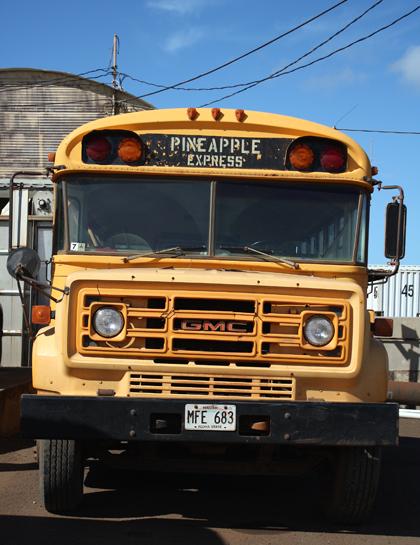 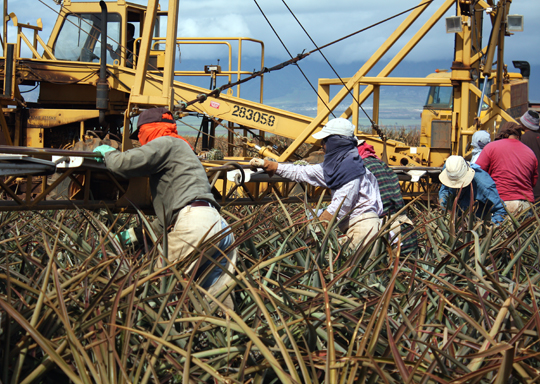 It started with a Maui Gold Pineapple Tour, the only working pineapple plantation tour on this island. Price is $65 for adults; $55 for children, ages 5-12. And each person gets to take home their very own pineapple afterward.

Board the “Pineapple Express” bus to get a tour of the fields. There are 1,500 acres planted here — all by hand. An especially efficient worker can plant 7,000 pineapples a day.

Pineapple, which originated in Brazil, actually grow on stalks. It takes two years for a new crop to emerge after it is first planted.  And it takes a surprising 18 to 24 months for the fruit to mature.

For shipments to the mainland, which take 10 days, the pineapples are picked while they still have a little green tinge to them. If they were thoroughly yellow, their shelf life would be non-existent. Pineapples don’t ripen after they’re picked. To judge a good one, give it a thump with your finger. If it sounds hollow, it’s juicy inside. 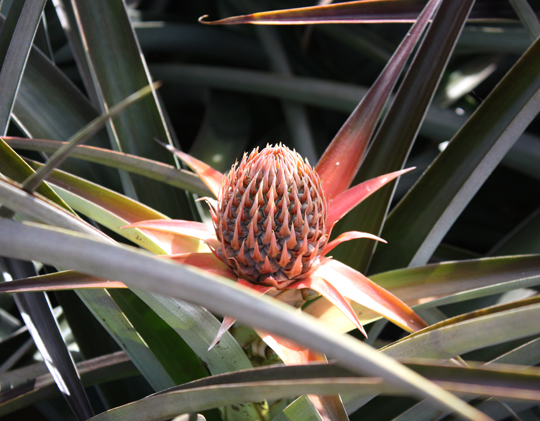 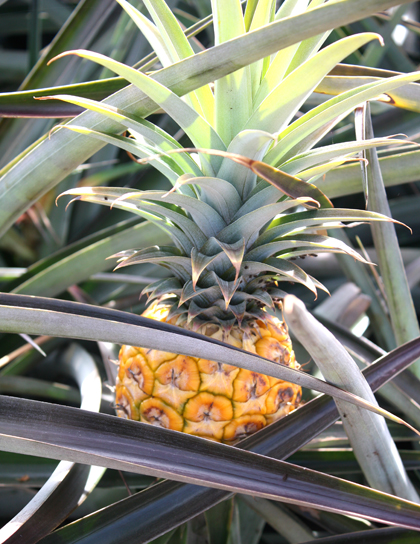 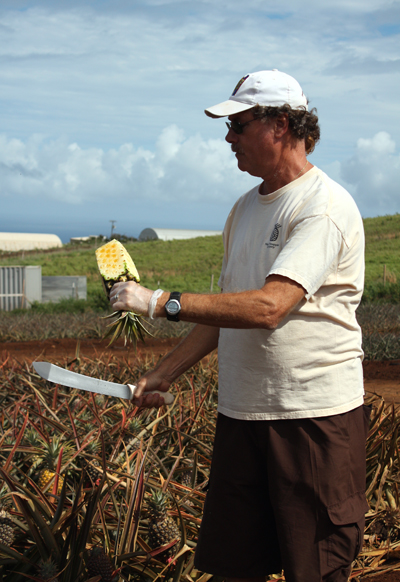 We had a chance to try pineapples cut right off the stalk in various stages of ripeness. First up, one with 85 percent sugar and a hint of green coloring. It tasted like what we’re used to in the States — sweet but with a bit of acidity for balance and roundness. Next, one that was entirely yellow with 90 percent sugar. It had a subtle creamy, coconut note, but tasted a little flat because of its lack of tang. Finally, an extremely ripe pineapple with more than 95 percent sugar. It had an explosive pineapple intensity, with an almost fermented quality to it. 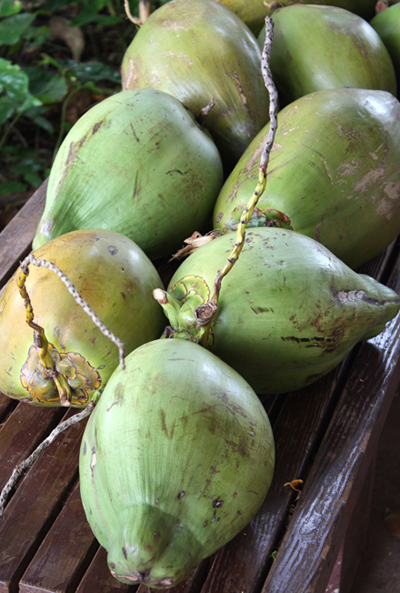 Later that afternoon, we had a chance to acquaint ourselves with a few more Maui produce specialties, including Molokai purple sweet potatoes. Grown for three generations by the Decoite family of L&R Farms, these wonderful tubers have red skins, purple flesh, a creamy texture and an almost nutty-vanilla note. They can’t be exported, unfortunately. Instead, you’ll have to get your fill with mashed sweet potatoes served at many Hawaiian restaurants or with bags of sweet potato chips (which you can bring home with you). 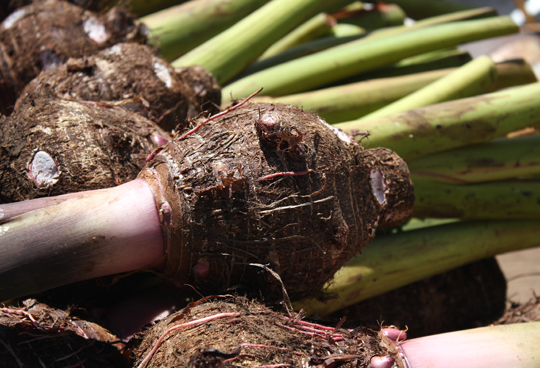 You may know taro (kalo) only from the starchy staple of poi (smashed, cooked taro that has a sweet bean-artichoke flavor). But lately, Hawaii chefs are looking for new ways to use the leaves, which are packed with Vitamin C, as well as its starch, which contains calcium.

Another starchy fruit that was a revelation to many of us was breadfruit. From the outside, the large fruit looks almost like a durian that has had its spikes sanded down.

High in potassium, the starchy fruit has a mild flavor much like a potato crossed with artichoke. It can be steamed, roasted, boiled, fried, pickled, dried or fermented. But the real treat is trying one that is over-ripe. Crack it open, and it’s a gooey, creamy white mess inside. Dip a spoon into the flesh with its pudding-like texture and enjoy a most wonderful vanilla-floral taste. It’s like dessert all on its own. 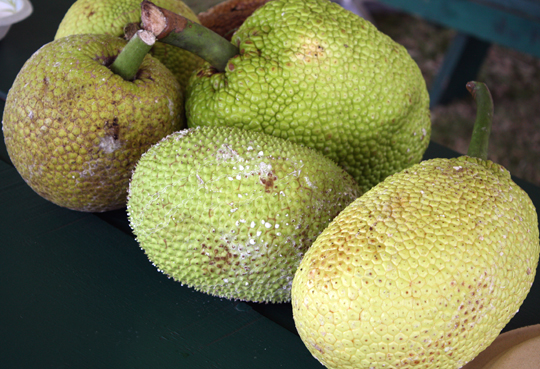 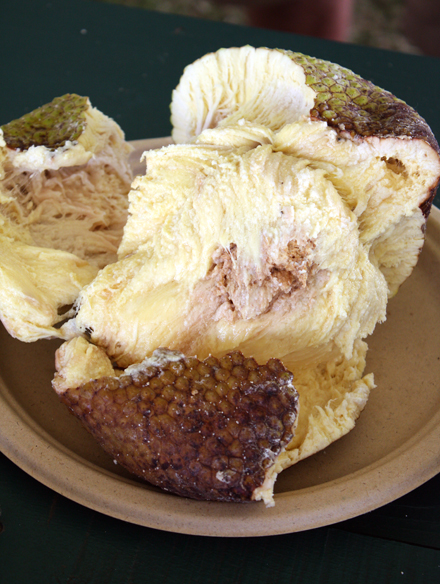 Armed with our new knowledge of Maui specialty products, we judges were set to do our judging duties at the festival, now in its fifth year. With live entertainment, food booths and a farmers market, the festival attracts thousands each year. 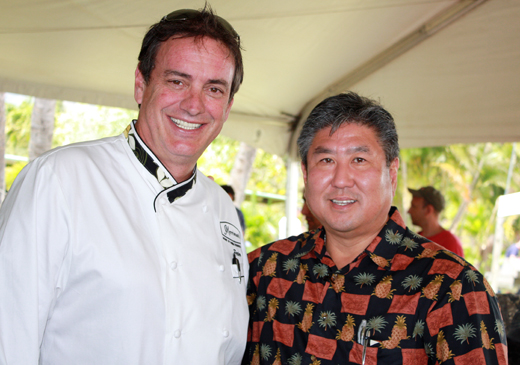 Noted Hawaii chefs Peter Merriman and Alan Wong also were on hand to take the stage.

Our duty was to taste the 12 entries and to choose one winner, who would receive a trophy and bragging rights. 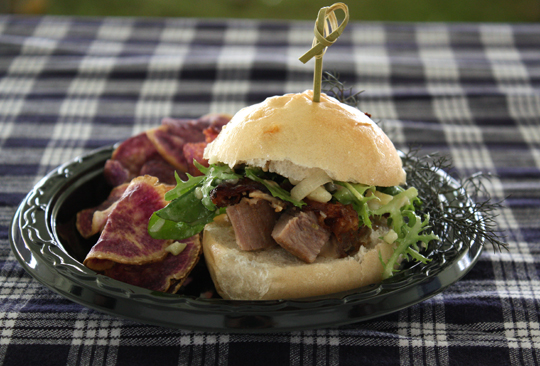 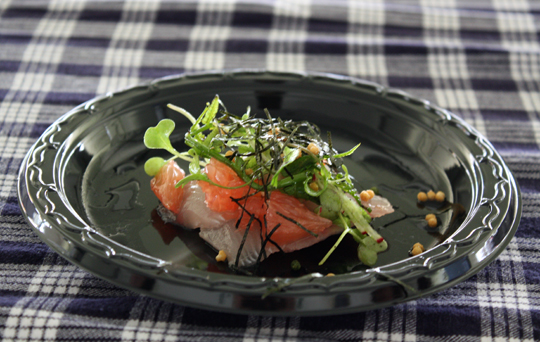 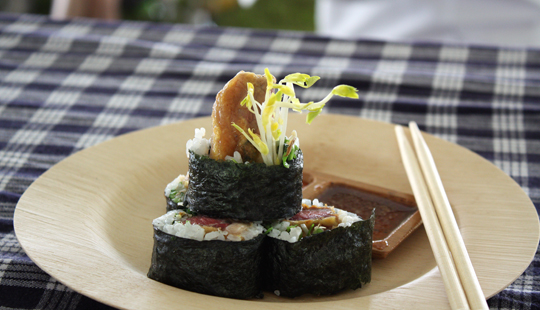 Up on stage, we took bites of each and wrote down comments on the score sheets in front of us. Among the dishes were: Kona Kampachi crudo with chili pepper vinaigrette by Chef Joey Macadangdang of Roy’s Restaurants, Maui; “Korean-Style Beef Jun Sushi” by Chef Tylun Pan of Ko Restaurant in the Fairmont Kea Lani, Maui; “Porchetta Mini Slider with Frisee, Limas and Fingerlings” by Chef Marc McDowell of the Makena Beach & Golf Resort; and “Sweet Potato Ice Cream with Coconut” by Chef Jojo Vasquez of Banyan Tree Restaurant in the Ritz-Carlton Kapalua. 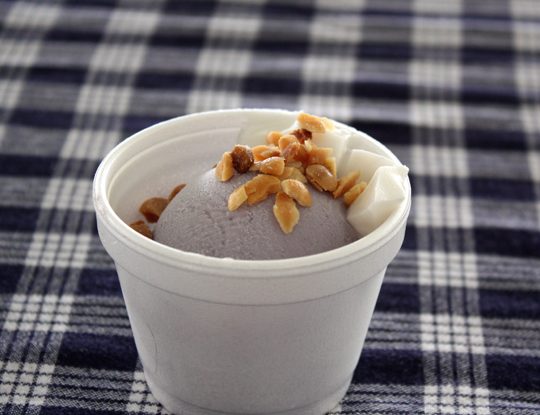 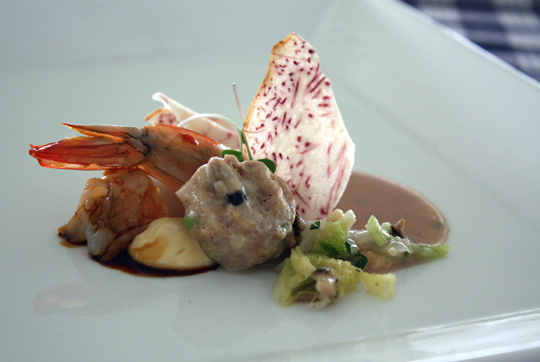 In the end, we were won over by the dish by Chef Sheldon Simeon of Star Noodle and Leoda’s Kitchen and Pie Shop. He created a clever deconstructed Chinese dumpling with taro vinaigrette.

If you’re planning a trip to Maui next year, be sure to time it to the ag fest. After all, at what other event can you taste all 12 premiere chef dishes for a mere $25? Now, that’s a bargain bite. 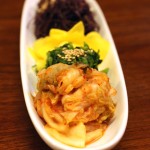 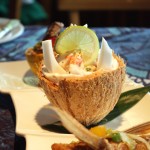 And: Four Maui Restaurants Worth Checking Out