Hop On Over to Hopscotch 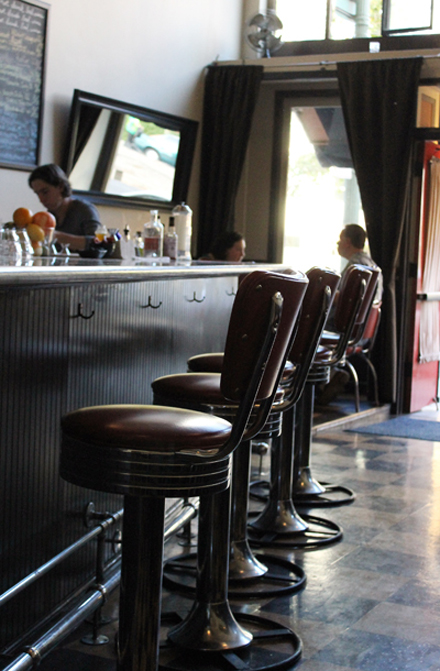 The bar at Hopscotch.

Hopscotch in Oakland’s Uptown neighborhood has all the accoutrements of a diner.

There is the worn checkerboard floor, the red bar stools, and the requisite burger and sundae.

Only here, the burger comes with griddled beef tongue and sesame aioli, and the sundae comes with a scoop of green tea ice cream.

Not to mention the the aged NY strip loin is finished with ginko nut herb oil and the daily benedict at brunch is napped with miso hollandaise.

That’s because Hopscotch is a decidedly upscale version of a diner — with a Japanese slant.

It reflects Chef-Owner Kyle Itani’s heritages, which are Italian and Japanese.

The food is fun and eclectic, as evidenced by the dinner my husband and I treated ourselves to recently. 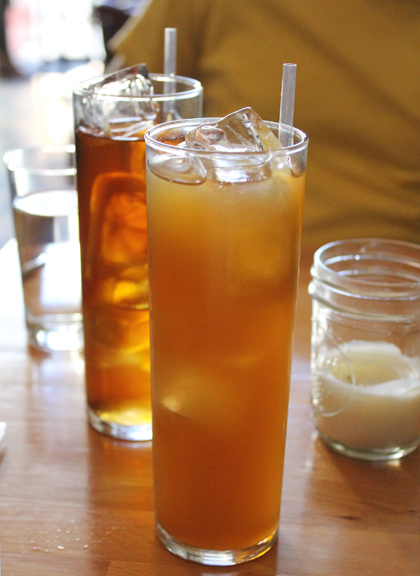 Cocktails are imaginative. Try the Black Tea Birdie ($9), made with lemon, honey, ginger and vodka that’s been steeped with black tea. The tannin comes through and is tempered by the tickle of the ginger and sweetness of the honey. It’s a drink with the hue of iced tea that goes down just as easily.

The amuse that night was crunchy, pickled cucumbers, served in Chinese soup spoons. 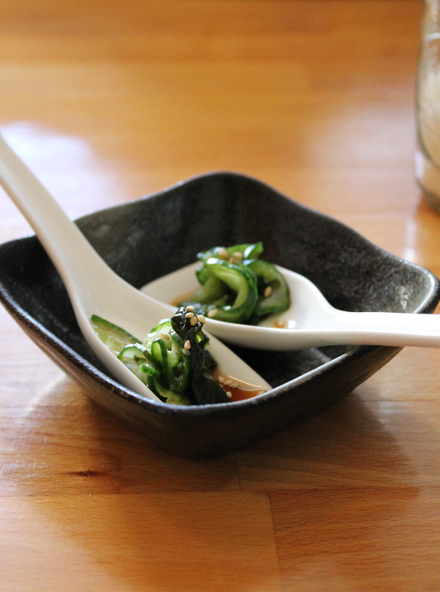 Portions are ample, as evidenced by the starter of pickled sardines ($10) that came with a tangle of peppers and green onions. The fish, boned and filleted, had a perky tang and a soft consistency from the pickling process. 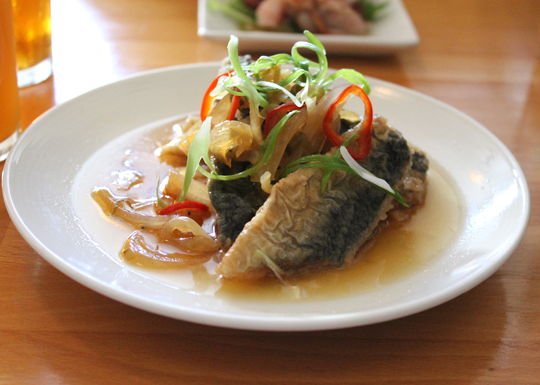 Octopus ($9) cooked under a brick was very tender and not the least bit chewy. Seaweed added crunch and a drizzle of ponzu a salty, citrusy accent.

Of course my husband, aka Meat Boy, couldn’t resist that famed First Base Burger ($14), made with house-ground chuck. This is one beefy tasting burger. You can opt to add house-cured bacon to it for $4 more, which is what he did. But even he agreed after the first bite, it was superfluous. The beef tongue adds so much flavor that the bacon gets lost in it all and isn’t needed at all. The house-made potato chips are fantastic. They are thick-cut and possess a purity of potato flavor. 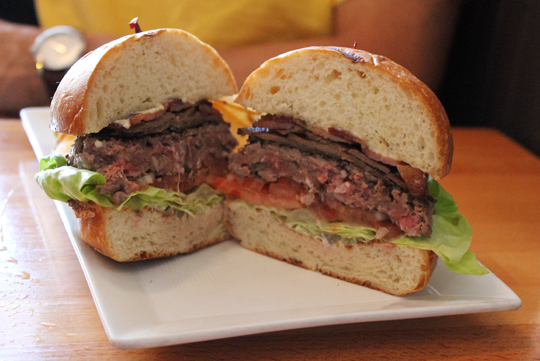 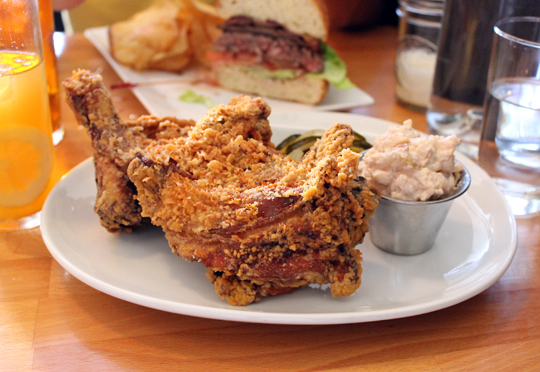 Fried chicken — one of the most popular dishes.

I opted for another signature dish: Buttermilk Fried Chicken ($18). It comes with sweet house-made pickles and a small cup of fabulous potato salad that has the surprise addition of wasabi. It makes me want to add wasabi to all my home-made potato salads from now on.

The chicken itself arrived piping hot — almost too hot to pick up with your fingers for a few minutes. The crust was crunchy and the chicken nicely seasoned with a bit of soy sauce. The portion is a small half chicken that is cooked intact, creating a neat presentation. Both the dark and white meat parts were fairly juicy, though I think the breast would have benefited by being fried separately, which would have left it just a little more succulent. 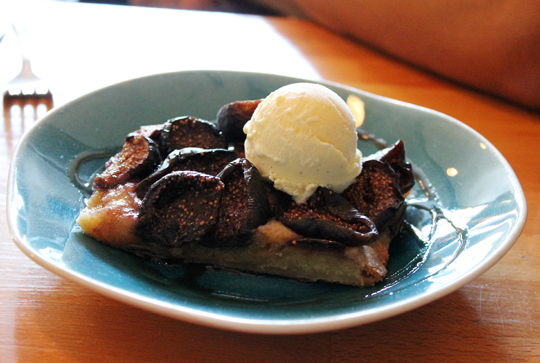 A fig tart that would be pretty satisfying for breakfast, too.

Desserts often make use of seasonal fruit, such as in the fig and almond tart ($8) that I enjoyed. It was comprised of both fresh and roasted figs on a pastry with a frangipane filling. The tart was garnished with a scoop of vanilla ice cream and a drizzle of red wine syrup (of which I wish there was just a bit more on the plate). 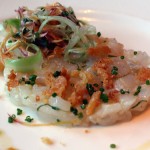 Other Oakland Restaurants to Try: Oliveto 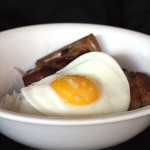 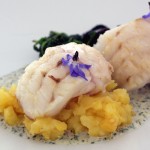