A Mackerel Match Made In Heaven 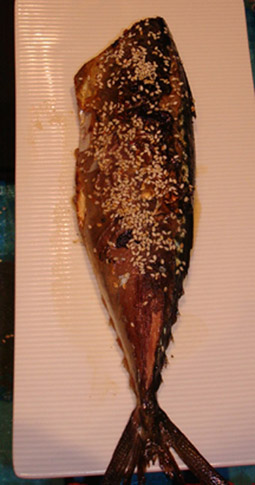 My husband can attest to the fact that mackerel is not one of my fave fishes. In fact, usually when I get a slice in an assortment of sushi or sashimi, it always ends up on his plate instead.

Stuart Brioza knows it’s a hard-sell, too, even if mackerel (wild-caught king and Spanish) is one of the best seafood choices on the Monterey Bay Aquarium’s Seafood Watch Guide. Nevertheless, Brioza, the executive chef of Rubicon in San Francisco, made many a convert when he cooked a fabulous honey, soy, and beer broiled mackerel with sesame-lime glaze at the recent “Cooking For Solutions” gala at the aquarium. The usual strong taste of the mackerel was tempered by the marriage of the other sweet, aromatic, and citrusy ingredients. The result was like a less sweet unagi. And it was scrumptious.

Speaking of marriage, Brioza and his longtime girlfriend, Nicole Krasinski, Rubicon’s pastry chef, will finally be tying the knot. The couple, who met 13 years ago in a photography class at De Anza College in Cupertino, will be getting hitched on a friend’s farm in Hilo in September. Krasinski, who’s not fond of cake (say what?), plans on serving their guests exotic citrus tarts instead.

It’s shaping up to be quite a year for Brioza, who grew up in Cupertino and Danville, and Krasinski, who is a Los Gatos native. In the July issue of Food & Wine magazine, the couple will be featured in a story about the peach tree they adopt every year at Mas Masamoto’s renowned peach farm just outside of Fresno. Look for mouth-watering sweet and savory peach recipes. 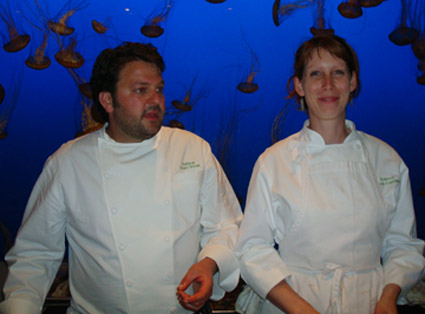 Salt and black pepper, to taste

To prepare mackerel: In a mortar and pestle, crush chile flakes, fennel seeds, coriander seeds, Szechuan pepper, bay leaves, and star anise. Combine rest of brine ingredients in a bowl with the crushed spices. Whisk in honey to dissolve. Pour mixture over mackerel and marinate for 45 minutes in the refrigerator.

To make glaze: Cook honey in a small saucepan until lightly caramelized. Add lime juice and bring to a simmer. Adjust seasonings with salt and pepper to taste; let cool. Fold in toasted sesame seeds.

To make herb salad: Toss herbs with a bit of olive oil and a sprinkle of salt.

To serve: Broil mackerel until golden and just cooked through. Check often, being careful so as to not let the honey burn on the skin of the fish. The broiled fish should be a nice bronze color.

Sauce serving plate with sesame-lime glaze. Place fish on top of the sauce and garnish with herb salad.