A Marriage of Pasta and More Pasta When my about-to-be husband and I were registering for wedding gifts five years ago, I remember combing through the online catalogues of Williams-Sonoma and Sur La Table for all manner of cooking gadgets I might finally be able to possess in my kitchen.

Good pots and pans. Professional knives. Flatware that actually matched. Gleamingly new baking pans to replace my ancient, beat-up ones. Ahh, it was like the joy of Christmas, only better.

Since we were living in a modest apartment at the time, I tried not to go too crazy because we simply didn’t have the storage space then. But I also tried to heed my friends’ advice to pack my registry with a lot of items to give folks an array of choices when it came to gift-giving.

And then I saw it. It caught my eye and called out to me because I’d never had one or even used one before. It was a pasta machine. Not just any pasta machine, but an attachment to my KitchenAid mixer that would allow me, the carb lover that I am, to make my very own strands of fettuccine.

As I stared at it on my computer screen, I yelled out to my husband, who was in the next room, “Honey, should I put this pasta attachment for the mixer on our registry?”

Him: “A pasta attachment? Are you kidding? We’ll never use it. You know we won’t. It’s just a waste of space.”

Sigh. OK, maybe he wasn’t a killjoy. Maybe he was right. Maybe we’d never really use it. Maybe.

So I clicked on to another page of culinary doodads, leaving the pasta attachment behind.

We were at my brother’s and sister-in-law’s house for the holiday. My brother Dale is a marvelous, passionate cook, and on the menu that night, among other things was — you guessed it — homemade spaghetti.

My brother was going to sauce it with good olive oil, crispy bits of bacon, and lovely pungent garlic.

As my brother, Dale, stood poised at the counter beside his KitchenAid mixer, I noticed my husband watching him. Dale combined the ingredients for the dough in the mixer bowl, then gave the dough a brief kneading by hand. Then, he started to feed the dough through the roller attached to the mixer that looked for all the world like an adult Play-Doh pumper machine. The roller flattened the dough effortlessly. Again it went through, and again, each time emerging a little thinner. Then, Dale changed the rollers to a cutting one, and fed the dough pieces through again, as beautiful, long strands pushed out the other end.

My hubby continued to watch my brother doing this. And when my hubby noticed I was watching him as he watched my brother, he said, “Hey, we should get one of those.”

“WHAT?!?” I replied, incredulously, not believing what I had just heard.

“We should get an attachment,” he repeated. “This is so cool!”

I rolled my eyes.

I reminded my hubby of a conversation five years ago. He, of course, did not remember it at all.

And with that, we ordered the attachment online when we got home. And a few weeks later, it arrived on our doorstep.

We took the three attachments out of the box (a roller, a fettuccine cutter, and a spaghetti cutter), read the instructions, and set to work, using the basic pasta recipe included. In went the flour, eggs, water, and olive oil into the bowl to be mixed by the paddle, then the dough hook. I dumped the dough onto a lightly floured counter, and began kneading it until it was smooth and soft. 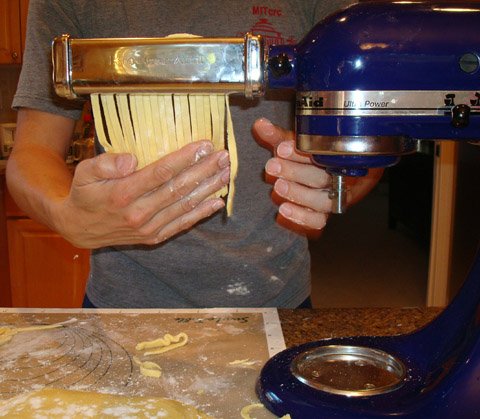 Then I handed the dough to my husband to have the first honor. Those are his hands in the photos. It took a little practice — some of the first dough pieces through the roller came out looking like abstract birds of a sort. But hubby soon got the hang of it. And soon, he was having the time of his life.

So why go to all the fuss of making your own fresh pasta when you can pick up a container at most any supermarket or use the ever-handy dried form instead?

Because the taste and texture are sublime. Fresh pasta tastes, well, fresh. You can actually taste the rich egg in the noodles, so much so that you can get by with the simplest of sauces because the noodles themselves have so much flavor and character. Moreoever, the texture is not one dimensional like dried, but rather both more chewy and more tender.

Yes, it does take more time to make your own pasta from scratch. But fresh pasta cooks up in a flash, far faster than dried. Throw it into a pot of boiling water, and it’s done in 2 minutes or less.

I like it with this bold tasting 5-hour pork sugo from San Francisco’s wonderful Perbacco restaurant. Yes, it does take a long time to make the sauce (actually longer than the five hours in the name of the recipe). But most of it is idle cooking. Once you have the ground pork, porcini, tomatoes, sage, juniper berries and whole bottle of red wine in the pot, you leave it alone to simmer until it reduces to a rich, thick ragu. The recipe makes enough so that you can freeze half of it to enjoy another time, too.

Making your own fresh pasta is something you should attempt at least once. (We’ve made it three times this year already.) It’s not only a blast, but incredibly satisfying, too.

Chop carrot, onion, celery and mushrooms in a food processor.

In a spice grinder, or mortar and pestle, grind juniper, allspice, cloves and pepper.
In a large Dutch oven, sweat vegetables and mushrooms in olive oil over medium heat until they become soft, 5 to 7 minutes, then add the pork, stirring until cooked through. Season with salt and pepper. Add wine, broth, mushroom liquid, herbs and spices. Bring to a boil. Reduce to a simmer and reduce by half for 1 to 1 ½ hours.  Add tomatoes and simmer on very low heat for 5 hours.

Add cream and allow sauce to simmer gently until it has emulsified, about 20 minutes. (If freezing the sauce, wait to add the cream until just before serving the pasta).