Behind the Scenes At A Salmon Cannery in Alaska CORDOVA, Alaska — Of the four canneries in this tiny fishing village of 2,000, it’s hard to believe that Copper River Seafoods is the smallest, especially when you realize it processed 15 million pounds of seafood last year, most of it salmon and halibut.

Fishing boats pull up to the dock by the cannery, where their payload is pumped off the boat through a big pipe that sends a cascade of fish pouring into big bins on deck just like coins out of a slot machine. 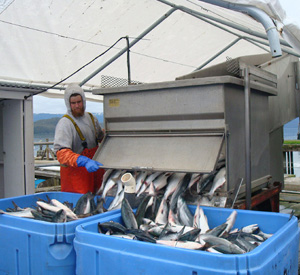 Over the years, the makeup of cannery workers here has changed dramatically. Once workers came from the local community. But these days, the majority of the workers at Copper River Seafood and other canneries are emigres from the Ukraine and the Czech Republic, many of whom had never seen a salmon before now. 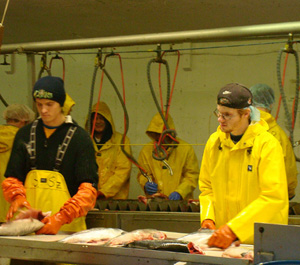 The roe is sorted into six grades by Japanese-American technicians. And all of it will be shipped to Japan to a ravenous population that prizes the smooth, salty orange eggs. 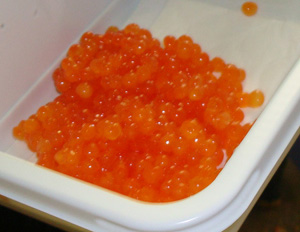 Not all commercial fishermen send their catch to canneries. Some like Bill Webber, who has been fishing for more than 40 years, prefer to do it all themselves. He estimates that by the time salmon from a cannery makes it to the consumer, it’s been touched by about 127 pairs of hands. With his salmon, he says, only about 5 people have handled it, leaving the flesh fresher and in better condition.

Salmon are processed on his boat while it’s still at sea. The fish are bled in an immersion tank rather than just out on the deck as most fishing boats do, leaving Webber’s fish maintaining rigor mortis longer, and therefore with a longer expected shelf life. The fish is then layered in ice until the boat returns to port, usually a 12- to 36-hour period. Within two hours of the boat’s return, the fish is boxed and delivered to the Cordova airport for shipping by his company, Gulkana Seafoods.

Says Webber about why he does what he does: “I want people to open up the box, smell the sea, and just go, ‘Wow.”’